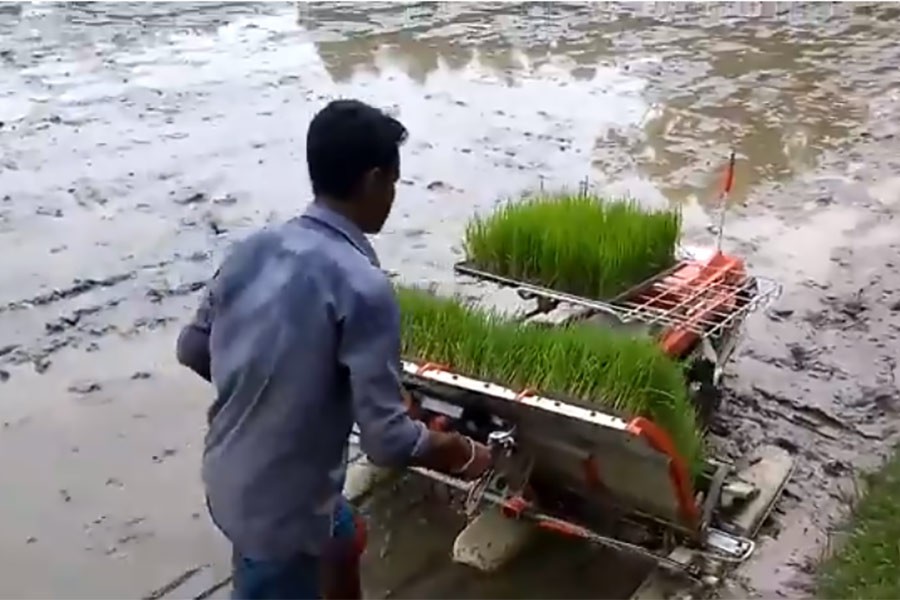 The photo was taken from a video footage

Agriculture has played a critical role in Bangladesh's development and growth. It has been the backbone of the economy even before the country was born. Although it accounts for 16 per cent of the gross domestic product (GDP), almost half (about 47 per cent) of the working population depends on this sector. It plays a crucial role in food security and poverty mitigation.

Domestic farm produces have successfully eliminated famine. Despite increase in productivity and efficiency, most of it has been contribution of manual labour. However, the sector is now facing two major challenges-declining farmland land and a continuously growing population to feed and employ.

Bangladesh's population is projected to reach 230-250 million by 2050. A UNDP report says, two million is added to the population every year while the nation is losing 1.0 per cent of agricultural land every year.

The government has introduced many policies to help farmers grow and uplift their lives. Use of ICT in agriculture is also an area of focus.

Here are a few ways Bangladesh could integrate technology into the agriculture system:

1. Social media and access to information: Intermediaries between farmers and market get away with buying crops and produces from farmers at extremely low prices and then selling them at a high margin to consumers, particularly in urban areas due to information asymmetries. The farmers often suffer losses as they are forced to sell stocks at prices below production cost. Information and communication systems can bridge the gap between the country's farmers and consumers ensuring that both get a fair price. Everyone will be more aware of the market, at both urban and rural levels, and can make more informed purchase and selling decisions. With a push and use of smartphone and common apps; famers can create communication systems with other farmers, traders, buyers and directly with consumers.

Mango farmers from Chapainawabganj are using Facebook to sell directly to consumers in Dhaka.

2. Blockchain and financial innovation: Almost 70 per cent of the Bangladesh farmers are smallholders and unbanked. Access to finance is often costly for farmers, making farming an unviable business case. This is because of risk associated with financing smallholder farmers. Peer-to-Peer lending platforms and crowdfunding platforms can offer low cost financing opportunities for farmers.

However, cutting edge technology like blockchain could be used to create a digital and verified identity of the farmers along with their credit and transactional history in a distributed network and accessible by relevant actors such as banks and insurance companies.

3. Decision support system: With changes in weather, soil conditions and other variables, it is getting increasingly difficult to use traditional methods to determine use of inputs, medicines, and other farming techniques. Use of drones, sensors and IoT devices could help farmers make better decision. An IoT-enabled soil sensor could help detect geographical location of the farm, integrate soil fertility and climate data, help crop selection and volume based on market demand and supply data, decide schedule and decide on techniques among others. IoT devices can massively help dairy farms and fish farms by eliminating the guesswork for artificial insemination and fish feeding, thus reducing cost for the farmers and increasing farm productivity.

In 2017 a memorandum of understanding (MoU) was signed between Bangabandhu Sheikh Mujibur Rahman Agricultural University, Huawei Technologies and Awami League's research wing Center for Research and Information to deploy and test sensor-based real time data collection and information sharing for the farmers.

Startup companies like Misfit in partnership with Grameenphone is working with smart devices for dairy cattle, which will allow farmers to accurately detect "heat" in dairy cattle for artificial insemination and reducing their loss and increasing milk productivity.

Modern technology like IoTs' use in agriculture is more challenging than other sectors because no 'one-size-fits-all' solution is available.

4. Farm Mechanisation: With increase in rural to urban migration, the labour cost has increased. Harvesting crops by hand is time-consuming and labourious. Days of work can be done in hours by using machines like combined harvesters. Mechanisation also includes use of modern machinery to speed up every process involved. In 2017, the government had raised subsidy to cultivators for purchasing farm machineries from 30 per cent to 50 per cent, with a view to expanding mechanised seeding, transplanting and harvesting so that farmers can produce more food cost effectively.

5. Genetic engineering: Bangladesh has made considerable progress in this area; however, in the next decade further investment needs to be made to ensure that we can reduce post harvest wastage, increase yield and grow crops round the year. By encouraging and incentivising research and development of genetically modified (GM) crops, Bangladesh has entered the arena of growing genetically modified food such as pest-resistant Bt Brinjal and Vitamin A-enriched Golden Rice.

6. Data-driven agriculture practices: Use of the technologies mentioned above could pave the way for collecting, analysing and utilising data for better decision-making at the farm level and at the policy and business levels. Already there has been application of such data-driven approach. And those who will invest in building a robust data and analytics value chain will advance the furthest and fastest.

However there are some challenges to technology adoption.

The first challenge is lack of connectivity which inhibits farmers' ability to take advantage of new technologies. However, we don't have any appropriate data regarding how many farmers use smart devices and how many of them use or can use those devices for agricultural purposes. Smart devices are mostly in hands of urban middle-income people but this has to reach the rural farmers in a mass scale.

The second challenge is lack of awareness. Application of such cutting-edge technology and device is characterised by crop diversity and small land holdings. In farming situation, no two cases are identical and in agronomical fields, hardware and software maintenance costs are expected to be higher than usual as those devices have to be exposed to harsh environment like wind, storm, water, heat or cold and physical damage.

Finding right business model is also a challenge. In general, most of the users do not want to pay for an application. Access to finance for farming and agriculture is a critical challenge for the farmers. However, use of technology can bring in transparency and data, to enable and unlock capital for agriculture and farming.

Finally, skilled human resources are essential. Skilled professionals in data analysis and science are required. Regarding this phenomenon, local universities need to possess strength to produce such type of human resources.

It is crucial to invest in technology to overcome or leapfrog some of the structural and institutional barrier, to enable to feed a huge population. There needs to be a systemic approach where there is space for government intervention, and the private sector-led innovation, from agri-input suppliers, agri-business practitioners, software and service providers, development expert and academicians, for augmenting growth of this sector.

Fahad Ifaz is the CEO of iFarmer, an innovative agritech solution.

Should all loans come under 6-9pc ceiling?

ICJ Ruling and the road map for Myanmar