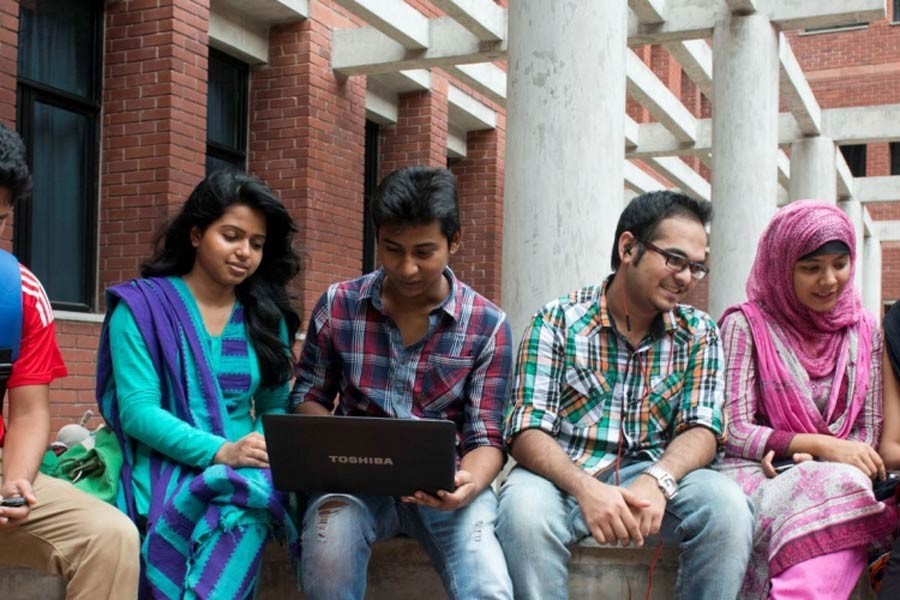 Higher education plays a key role in economic development. Accumulation of human capital stimulates innovation and entrepreneurship which lead to increase in productivity. Countries with higher human capital tend to enjoy sustainable economic growth in the long run. Research and innovation is at the heart of higher educational institutions.

There are many problems associated with higher education in the developing world. One of the key issues is financing. It is well recognised that sustainable financing for education is important for productivity, resilience of economies, and inclusive economic growth. International norms indicate education sectors to receive 5-6 per cent of the GDP or 20 per cent of the national budget. For example, universities in OECD countries are mostly public funded where governments provide around 70 per cent of funds required. Moreover, private universities receive up to 5 per cent public funding of total fund in OECD countries.

This fiscal year government has set aside Tk 857.62 billion for education sectors which represents 15.1 per cent of the total budget.  The allocation for the secondary and higher education sector has been raised to Tk 331.0 billion from Tk 296.0 billion in the current fiscal year. Still Bangladesh's expenditure on education is one of the lowest in the world, both as a percentage of GDP and as a percentage of the national budget.

The allocation of fund for R&D in public universities indicates the dire condition in this prime sector. For example, Dhaka University allocated only 1.09 per cent of total Tk 8.69 billion in this year's budget while the figure is 1.24 per cent of Tk 3.40 billion total budget for Chittagong University. Interestingly, according to newspaper reports, a total of Tk .66.75 million has been allocated in the main budget for research purposes at 46 public universities in the 2020-21 fiscal year which was Tk.64.58 million in the last fiscal year. At the same time, 64 private universities spent Tk .93.37 million in research in 2016 which was Tk .78.94 million in 2017 by 73 private universities (according to UGC).

It is evident that public fund alone is not sufficient for the development of higher education in Bangladesh. Most importantly, we have seen the financial vulnerability of private higher educational institutions during Covid-19 pandemic. Dropouts would increase significantly as students and parents become jobless or are facing serious economic hardship. Public and private universities simply don't have sufficient fund to provide generous support by scholarships and stipends in this crisis period. It is high time we need to think seriously about the financial model of private and public higher educational institutions. However, the good news is that there are a number of options.

An endowment fund is an investment fund established by a foundation that makes consistent withdrawals from invested capital. The capital or money in endowment funds is often used by universities, nonprofit organisations, churches, and hospitals. Endowment funds are typically funded by donations that are deductible for the donors and are used for specific purposes. Even many top universities around the world have their own endowment fund for scholarships, professorships, and research and development activities.

United States is the home of many great universities which have the largest endowments in the world including Harvard and Yale.  At the end of fiscal year 2017, the market value of the endowment funds of colleges and universities in US was $598 billion. For example, Harvard University had the largest endowment in the U.S. with $40.9 billion in 2019. Harvard paid $193 million from the endowment to undergraduates for scholarships to approximately 54 per cent of the students.

In Islamic precepts, Waqf is a very similar financial tool like endowment. Waqf is a voluntary donation: a running charity. Waqf literally means tying up of an asset (real estate, cash, etc…) for some specific Shari'ah compliant objective in such a way that i) the principle remains intact, and ii) only its usufruct (income/benefit) is spent on the named objectives. Unlike Zakat, the beneficiaries of the Waqf are diverse and inclusive. Its expenditure sector is not specific but guided by Islamic financing outlook.

According to one estimate, total world Waqf assets could range from USD 100 billion to 1 trillion. For instance, the value of land and property Waqf in Indonesia alone is estimated at around Rp370 trillion (US$27 billion). There are an estimated 250,000 Waqf properties in India, valued more than US$75 billion and with a reported potential for generating approximately US$3 billion in revenue.

Waqf has been playing a critical role in socio-economic development around the world. For example, the scientific centers of Dar Al-'lm, Dar al -Hekmah, and Jami'al-Azhar in Egypt were all built from Waqf revenues. Malaysia, Indonesia, and Turkey have recently transformed their higher education sector by using Waqf. Turkey established 16 Waqf universities by 1998. By the year 2015, this number increased to 76. Some of them, Sabanc? University and Koç University, already enjoy an excellent reputation and are considered among the top universities in the country.

Waqf is also widely known in Bangladesh. According to 1986 Waqf census, there are 150,593 Waqf estates in Bangladesh with a total land of 606,107.23 acres. Income from these Waqf estates was only 70.0 million. In 2015-16, the Waqf Administration, the government designated body managing registered Waqf estates, collected Tk. 5.86 million from 21,588 registered estates.

The contribution of Haji Mohammad Mohsin endowment in education is still visible in many parts of the Bengal. Hamdard University in Bangladesh is a recent example of successful Waqf university in Bangladesh. There are a number of innovative Waqf development models (cash Waqf, fintech based crowd funding Waqf and others) which can directly contribute to the development of higher education sector. The revival of Waqf can be a real game changer for higher education financing.

Every public and private university should establish its own Waqf fund. Wealthy people of the society should come forward to donate generously. It might be possible to create a revolving investment mechanism like endowment fund in the West through which the assets pooled under Waqf structures would be invested to generate stream of revenues to support universities in providing scholarships, professorships and research and development grants.

In conclusion, we can say that government alone cannot ensure sustainable source of financing for higher education and it is even more challenging for a developing country like Bangladesh where many competing priorities exist. To solve this financing gap, Waqf can play a pivotal role. If we can revive the old Waqf properties and make new Waqf education fund in every public and private university, we will be able to develop an inclusive, innovative and sustainable higher education in Bangladesh.

Dr. Md Akther Uddin is is Assistant Professor at the School of Business, University of Creative Technology Chittagong, Bangladesh.