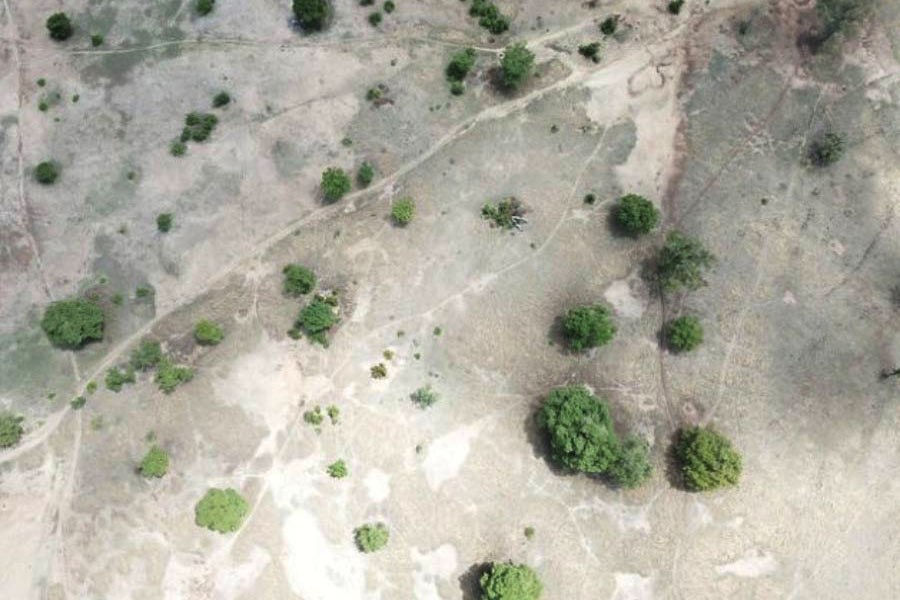 Forest fires, droughts and other forms of land degradation cost the global economy as much as US$15 trillion every year and are deepening the climate change crisis. Pictured is a drone visual of an area in Upper East Region, Ghana prior to restoration taken in 2015. —Credit: Albert Oppong-Ansah /IPS

Forest fires, droughts and other forms of land degradation cost the global economy as much as 15 trillion dollars every year and are deepening the climate change crisis, a top United Nations environment official said Friday (September 06).

Ibrahim Thiaw, executive secretary of the UN Convention to Combat Desertification (UNCCD), said the degradation of land was shaving 10-17 per cent off the world economy, which the World Bank calculates at US$ 85.8 trillion.

"In very simple terms, the message is to say: invest in land restoration as a way of improving livelihoods, in reducing vulnerabilities contributing to climate change, and reducing risks for the economy," Thiaw said in response to a question from IPS.

Thiaw spoke to reporters in New York through a video-link from New Delhi, India, where delegates from UNCCD signatories are gathering for talks on tackling the desertification threat, which runs until September 13.

Droughts and desertification currently hit 70 countries each year, while sand and dust storms are becoming a growing menace around the world, leading to asthma, bronchitis and other health problems, Thiaw warned.

"The good news is that the technology, the science and the knowledge is there to actually reduce land degradation and fix this phenomenon once and for all," said Thiaw, formerly a Mauritanian official and deputy chief of the UN Environment Programme.

"Land restoration is being done in many parts of the world and by restoring land we are able to mitigate climate change."

Some 100 government ministers and 8,000 delegates from 196 countries are at the UNCCD talks, which will cover drought, land tenure, restoring ecosystems, climate change, health, sand and dust storms and funding to revamp cities. Thiaw praised a record-breaking turnout of decision-makers in the Indian capital that "could mark a major turning point for how we manage the scarce land and water resources we have left."

An outcome document, known as the "Delhi Declaration", will inform this month's climate summit in New York and spur a "coalition of like-minded countries" to make firmer pledges on tackling droughts, said Thiaw.

"We are fast running out of time to build our resilience to climate change, avoid the loss of biological diversity and valuable ecosystems and achieve all other Sustainable Development Goals," said Thiaw, referencing the U.N.'s SDG agenda.

"But we can turn around the lives of the over 3.2 billion people all over the world that are negatively impacted by desertification and drought, if there is political will. And we can revitalise ecosystems that are collapsing from a long history of land transformation and, in too many cases, unsustainable land management."

Droughts are getting worse, says the UNCCD. By 2025, some 1.8 billion people will experience serious water shortages, and two-thirds of the world's population will be living in "water-stressed" conditions.

Though droughts are complex and develop slowly, they cause more deaths than other types of disasters, the UNCCD warns. By 2045, droughts will have forced as many as 135 million people from their homes.

Last month, a report from the UN's Intergovernmental Panel on Climate Change (IPCC) showed that better management of land can help limit the release of greenhouse gases and thus combat global warming.

Tackling desertification and other forms of land degradation could help keep the global rise in temperatures below the benchmark figure of 2 degrees Celsius, IPCC scientists said in the 43-page study.

An overview of IT sector during the pandemic

The budget and the fear of further wealth gap

Do we have over capacity for power generation ?

CSR in the time of pandemic