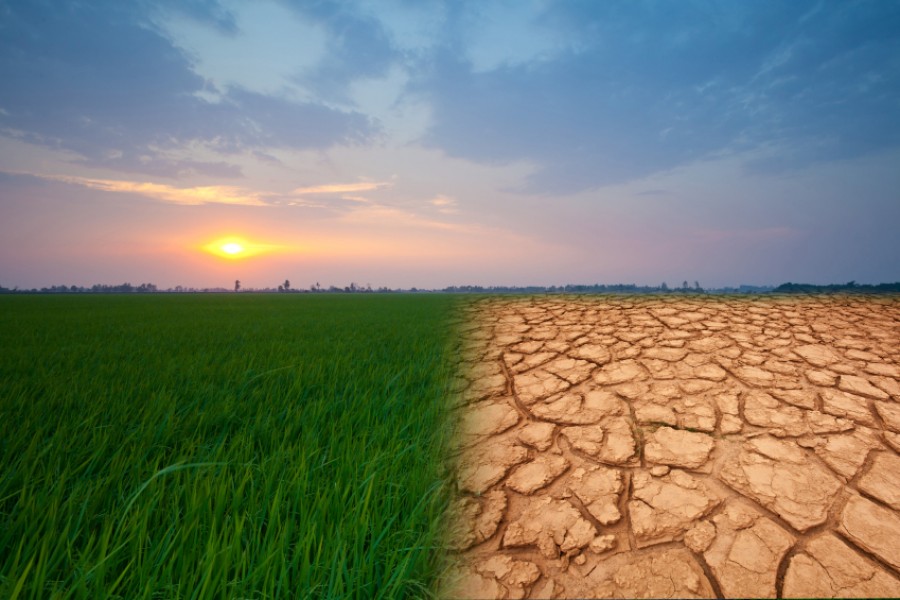 Climate change is already a reality. Ever-more-ferocious cyclones and extended droughts lead to the destruction of infrastructure and the disruption of livelihoods and contribute to mass migration.

Actions to combat rising temperatures, inadequate though they may have been so far, have the potential to drive dislocation in the business world as fossil fuel giants awaken to the need for renewable sources of energy and automakers accelerate investments in cleaner vehicles.

But measuring economic costs of climate change remains a work in progress. We can assess the immediate costs of changing weather patterns and more frequent and intense natural disasters, but most of the potential costs lie beyond the horizon of the typical economic analysis.

The economic impact of climate change will likely accelerate, though not smoothly. Crucially for the coming generations, the extent of the damage will depend on policy choices that we make today.

The first involves physical risks, arising from damage to property, infrastructure, and land. The second, transition risk, results from changes in climate policy, technology, and consumer and market sentiment during the adjustment to a lower-carbon economy.

Exposures can vary significantly from country to country. Lower- and middle-income economies are typically more vulnerable to physical risks.

For financial institutions, physical risks can materialise directly, through their exposures to corporations, households, and countries that experience climate shocks, or indirectly, through the effects of climate change on the wider economy and feedback effects within the financial system.

Exposures manifest themselves through increased default risk of loan portfolios or lower values of assets. For example, rising sea levels and a higher incidence of extreme weather events can cause losses for homeowners and diminish property values, leading to greater risks in mortgage portfolios. Corporate credit portfolios are also at risk, as highlighted by the bankruptcy of California's largest utility, Pacific Gas and Electric.

In what The Wall Street Journal called the first "climate-change bankruptcy" (Gold 2019), rapid climatic changes caused prolonged droughts in California that dramatically increased the risk of fires from Pacific Gas and Electric's operations.

For insurers and reinsurers, physical risks are important on the asset side, but risks also arise from the liability side as insurance policies generate claims with a higher frequency and severity than originally expected.

There is evidence that losses from natural disasters are already increasing. As a result, insurance is likely to become more expensive or even unavailable in at-risk areas of the world.

Climate change can make banks, insurers, and reinsurers less diversified, because it can increase the likelihood or impact of events previously considered uncorrelated, such as droughts and floods.

Transition risks materialise on the asset side of financial institutions, which could incur losses on exposure to firms with business models not built around the economics of low carbon emissions.

Fossil fuel companies could find themselves saddled with reserves that are, in the words of Bank of England Governor Mark Carney (2015), "literally unburnable" in a world moving toward a low-carbon global economy.

These firms could see their earnings decline, businesses disrupted, and funding costs increase because of policy action, technological change, and consumer and investor demands for alignment with policies to tackle climate change.

Coal producers, for example, already grapple with new or expected policies curbing carbon emissions, and a number of large banks have pledged not to provide financing for new coal facilities.

The share prices of US coal mining companies reflect this "carbon discount" as well as higher financing costs and have been underperforming relative to those of companies holding clean energy assets.

FINANCIAL STABILITY CONCERNS: Risks can also materialise through the economy at large, especially if the shift to a low-carbon economy proves abrupt (as a consequence of prior inaction), poorly designed, or difficult to coordinate globally (with consequent disruptions to international trade).

Financial stability concerns arise when asset prices adjust rapidly to reflect unexpected realisations of transition or physical risks. There is some evidence that markets are partly pricing in climate change risks, but asset prices may not fully reflect the extent of potential damage and policy action required to limit global warming to 2?C or less.

Central banks and financial regulators increasingly acknowledge the financial stability implications of climate change. For example, the Network of Central Banks and Supervisors for Greening the Financial System (NGFS), an expanding group that currently comprises 42 members, has embarked on the task of integrating climate-related risks into supervision and financial stability monitoring.

CHALLENGES TO REGULATORY FRAMEWORK: Given the large shifts in asset prices and catastrophic weather-related losses that climate change may cause, prudential policies should adapt to recognise systemic climate risk-for example, by requiring financial institutions to incorporate climate risk scenarios into their stress tests.

In the United Kingdom, prudential regulators have incorporated climate change scenarios into stress tests of insurance firms that cover both physical and transition risks.

It is crucial to ensure that the efforts to bring in climate risk strengthen, rather than weaken, prudential regulation. Policies such as allowing financial institutions to hold less capital against debt simply because the debt is labelled as green could easily backfire-through increased leverage and financial instability-if the underlying risks in that debt have not been adequately understood and measured.

MONITORY POLICY CHALLENGES: Climate change will affect monetary policy, too, by slowing productivity growth (for example, through damage to health and infrastructure) and heightening uncertainty and inflation volatility.

This can justify the adaptation of monetary policy to the new challenges, within the limits of central bank mandates. Central banks should revise the frameworks for their refinancing operations to incorporate climate risk analytics, possibly applying larger haircuts to assets materially exposed to physical or transition risks.

Central banks can also lead by example by integrating sustainability considerations into the investment decisions for the portfolios under their management (i.e., their own funds, pension funds and, to the extent possible, international reserves), as recommended by the NGFS (2019) in its first comprehensive report.

FINANCIAL SECTOR: Carbon pricing and other fiscal policies have a primary role in reducing emissions and mobilising revenues, but the financial sector has an important complementary role.

Financial institutions and markets already provide financial protection through insurance and other risk-sharing mechanisms, such as catastrophe bonds, to partly absorb the cost of disasters.

But the financial system can play an even more fundamental role, by mobilising the resources needed for investments in climate mitigation (reducing greenhouse gas emissions) and adaptation (building resilience to climate change) in response to price signals, such as carbon prices.

In other words, if policymakers implement policies to price in externalities and provide incentives for the transition to a low-carbon economy, the financial system can help achieve these goals efficiently.

Global investment requirements for addressing climate change are estimated in the trillions of US dollars, with investments in infrastructure alone requiring about $6.0 trillion per year up to 2030 (OECD 2017). Most of these investments are likely to be intermediated through the financial system.

From this point of view, climate change represents for the financial sector as much a source of opportunity as a source of risk.

The growth of sustainable finance (the integration of environmental, social, and governance criteria into investment decisions) across all asset classes shows the increasing importance that investors attribute to climate change, among other nonfinancial considerations.

Estimates of the global asset size of sustainable finance range from $3.0 trillion to $31 trillion. While sustainable investing started in equities, strong investor demand and policy support spurred issuance of green bonds, growing the stock to an estimated $590 billion in August 2019 from $78 billion in 2015.

Banks are also beginning to adjust their lending policies by, for example, giving discounts on loans for sustainable projects.

Sustainable finance can contribute to climate change mitigation by providing incentives for firms to adopt less carbon-intensive technologies and specifically financing the development of new technologies.

Channels through which investors can achieve this goal include engaging with company management, advocating for low-carbon strategies as investor activists, and lending to firms that are leading in regard to sustainability. All these actions send price signals, directly and indirectly, in the allocation of capital.

IMPACT OF SUSTAINABLE INVESTMENTS: However, measuring the impact that sustainable investments have on their environmental targets remains challenging. There are concerns over unsubstantiated claims of assets' green-compliant nature, known as "greenwashing."

There is a risk that investors may become reluctant to invest at the scale necessary to counter or mitigate climate change, especially if policy action to address climate change is lagging or insufficient.

The analysis of risks and vulnerabilities-and advising its members on macro-financial policies-are at the core of the International Monetary Fund's (IMF's) mandate. The integration of climate change risks into these activities is critical given the magnitude and global nature of the risks climate change is posing to the world.

MACRO-FINANCIAL TRANSMISSION OF CLIMATE RISKS: An area where the IMF can especially contribute is understanding the macro-financial transmission of climate risks. One aspect of this is further improving stress tests, such as those within the Financial Sector Assessment Programme, the IMF's comprehensive and in-depth analysis of member countries' financial sectors.

Stress testing is a key component of the program, with these stress tests often capturing the physical risks related to disasters, such as insurance losses and nonperforming loans associated with natural disasters.

Assessments for The Bahamas and Jamaica are recently published examples, with a scenario-based stress test analysing the macroeconomic impact of a severe hurricane in the former and a massive natural disaster in the latter.

More assessments of this kind are in progress or planned for other countries. The IMF is also conducting an analysis of financial system exposure to transition risk in an oil-producing country.

The IMF has recently joined the NGFS and is collaborating with its members to develop an analytical framework for assessing climate-related risks.

Closing data gaps is also crucial. Only with accurate and adequately standardised reporting of climate risks in financial statements can investors discern companies' actual exposures to climate-related financial risks. There are promising efforts to support private sector disclosures of such risks.

But these disclosures are often voluntary and uneven across countries and asset classes. Comprehensive climate stress testing by central banks and supervisors would require much better data.

The IMF supports public and private sector efforts to further spread the adoption of climate disclosures across markets and jurisdictions, particularly by following the recommendations of the Task Force on Climate-related Financial Disclosures (2017). Greater standardisation would also improve the comparability of information in financial statements on climate risks.

This article draws on Chapter 6 of the October 2019 Global Financial Stability Report and was prepared under the guidance of Martin ?ihák and Evan Papageorgiou of the IMF's Monetary and Capital Markets Department. Pierpaolo Grippa is a senior economist at the International Monetary Fund (IMF), Jochen Schittmann is the IMF's resident representative in Singapore and Felix Suntheim is a financial sector expert in the IMF's Monetary and Capital Markets Department.