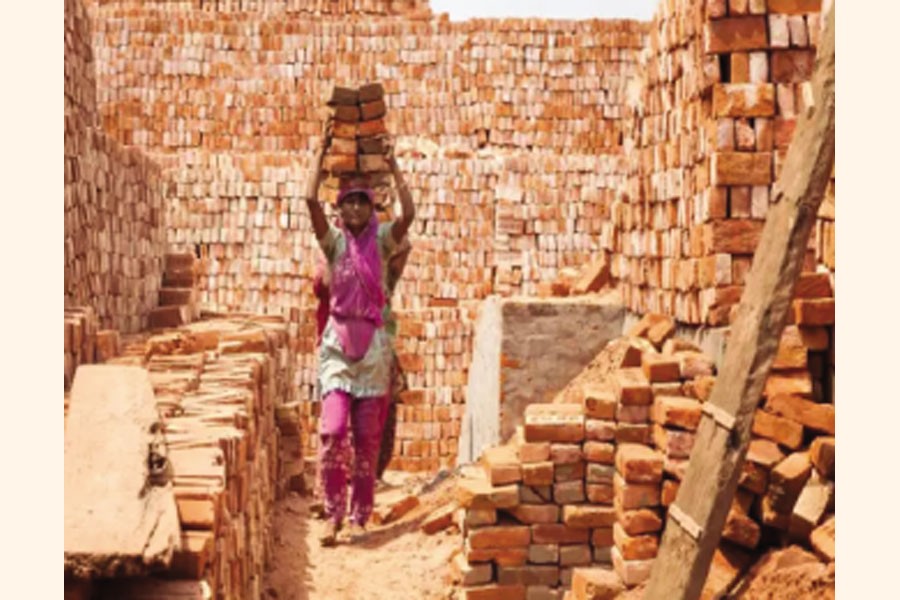 A woman worker at a brickfield. —Collected Photo

The Bangladesh High Court directive  on the government to ban the operation of all illegal brick kilns and the use of fuel woods is a welcome move.  The petitioner's lawyer argued that no brick kiln should be operated without obtaining licences and Environment Clearance Certificates from the Department of Environment, as per the Brick Manufacturing and Brick Kiln Establishment (Control) (Amendment) Act 2019.

Brick Manufacturing and Brick Kiln Establishment (Control) Act  2013"  came into effect in July 2014 and then the Brick Manufacturing and Brick Kiln Establishment (Control) (Amendment) Bill was passed in parliament in 2019. It simply barred the conventional brick-making industry. It prohibited setting up of brickfields in residential, protected, commercial and agricultural areas as well as in forests, sanctuaries, wetlands and  Ecologically Critical Areas (ECAs). Establishing of brick kilns in such areas was declared a criminal offence, with varying degrees of punishment for the offenders depending on the areas involved. Without a licence from the Deputy Commissioner of the respective district, no one would be allowed to set up a brick field.

However, the working arrangements and conditions are deplorable.

Workers work 12-14 hours a day, six days a week in these brick making kilns and they lack basic health and safety measures and do not have access to employer provided benefits such as limit to overtime, healthcare facility, worksite clean drinking water or washroom availability, sick or earned leave, maternity leave, etc. which are common in the formal organised employment sectors. This enormous number of laborers, including people and even children work in  the  brick kiln  on  a  temporary or verbal  agreement only and  with very low  wages. The workers work there for very long hours, sitting or standing in awkward positions, close to very high heat, without any personal protective equipment provision. Brickfield jobs are dirty, dangerous, demeaning and demanding.

Intriguingly and sadly, the current court directives as reported in the news media did not apparently take into account the workers' health, safety and wellbeing issues which have been on the forefront of many public health discussions for a long time. Occupational health and environmental health both should have been used to make a stronger argument in this court case as brick kilns of Bangladesh are notorious workplaces.

Though the banning of illegal brick kilns and stopping of fuel woods use in brick kilns will help protect the workers' health, safety, wellbeing, it appears that the whole directive was to protect the environment and the surrounding communities from the resulting pollution not because of the workers' bad health originating from their work in the brick fields. Why is their health and safety not important to the policy makers of Bangladesh to consider?

What is known about these workers' health issues from research studies?

Another study determined the prevalence of low back pain among these workers. It showed that 70 per cent of the 148 female workers studied

reported low back pain and it was most common among brick moulders. Among them, 45 per cent reported it due to manual material handling and 40 per cent due to awkward lifting of heavy objects (e.g., bricks). One study investigated the impairment of lung function and the prevalence of respiratory symptoms. The result showed significantly lower lung function and respiratory symptoms among brick field workers (250 workers)  when compared with the control group (130 workers). The prevalent respiratory symptoms included  dyspnea (46.8 per cent), phlegm (39.2 per cent), and chest tightness (27.6 per cent).

recovery heart rates) were considerably higher on hotter days for the brick molders.

One research investigation determined the prevalence of respiratory disorders among 220 brick field workers.

These workers showed lower values of FVC, FEV1, FEV1/FVC ratio, and PEFR (respiratory health measures) compared to the control group. Brick manufacturing process releases large amounts of silica dust into the work environment. Dust exposure affects the lung function of these workers. Another study assessed food habits and health problems of 126 brick field workers in Cox's Bazar. It reported the workers work under high physical and biomechanical pressure and for a long time. Among all these workers, protein consumption was found to be quite poor and most of them skipped their breakfast.

Brick kilns are a hazardous workplace. Workers' health, safety and wellbeing need to be brought on the policy makers’ discussion table while they try to reform this sector.

A deal is reached at COP27 but with what prospect?