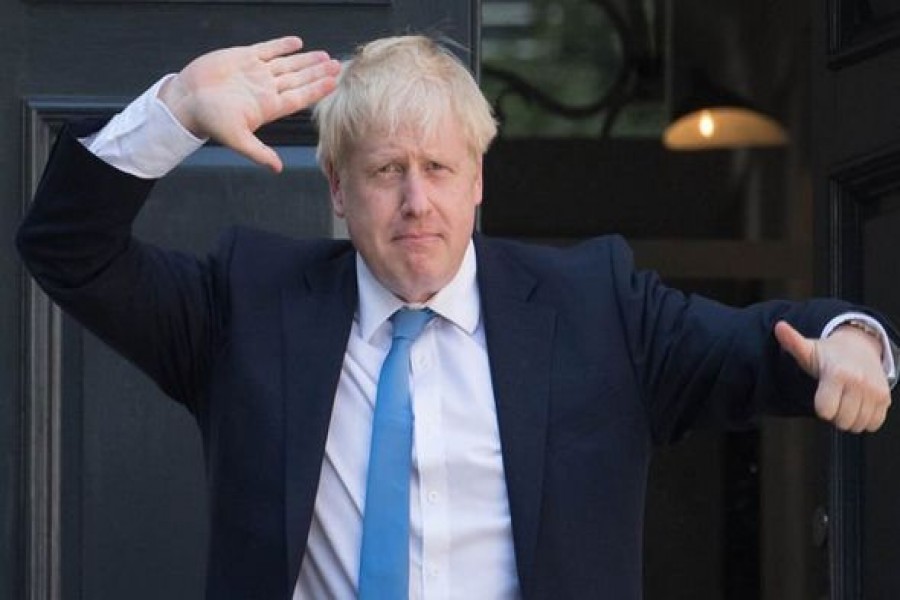 British Prime Minister Boris Johnson has survived a confidence vote by securing the support of 211 ruling party legislators. However, according to analysts the opposition by 148 has dealt a massive blow to his authority and has over the last few days raised questions over his leadership.

It needs to be remembered that there are 650 seats in the House of Commons, and the implication of this vote is that only 211 members of parliament have confidence in him as Prime Minister. This indicates that the more contentious and extreme proposals of the government may face more difficulty in getting majority support in the future. Johnson can no longer take majorities for granted. This is a remarkable predicament for a politician who, in December 2019, received a substantial overall majority of 80 seats.

Before the vote, Johnson had been informed by Graham Brady, Chairman of the 1922 Committee of MPs, that 54 no-confidence letters -- the threshold required to trigger a vote -- had been submitted.  Nevertheless the result was far narrower than even the most pessimistic Johnson allies feared. Ahead of the vote, a margin of 80 was considered by many to be a worst-case-scenario. Now, Johnson supporters are scrambling to spin these results as a victory or deciding what their next move is, as his premiership looks shakier than in any time since he took office.

On June 7, Rosa Prince reported through CNN that the Prime Minister now realises that his premiership is in jeopardy. This was apparently reflected when "Johnson clambered out of his chauffeur-driven car, wife Carrie at his side, to attend a service of thanksgiving for Queen Elizabeth II's 70 years on the throne; a murmur rose from the waiting crowd, a low grumble that rapidly coalesced into boos. It has been noted by the CNN that this has not been the first time that senior British politicians have been "jeered in public" but such a course of action as booing from an assembly of traditionalists who had turned up to celebrate a Queen's long reign and were "overwhelmingly likely to have voted Conservative at the last election" must have disturbed "Johnson to his core".

It may be recalled that Johnson's troubles surfaced with the scandal of how parties had taken place in Downing Street during the lockdown that had been imposed all over the United Kingdom during the osmotic presence and gradual growth of the Covid Pandemic. These parties that had been held secretly in Downing Street had surfaced in the media and had been seen as a breach of the coronavirus regulations at a time when there were several other serious issues facing the UK at that time: the cost of living, war in Ukraine and the challenge of ending inequality. The pain and anger among the general public was exacerbated because of the sacrifices that were being made by families during that strange, intense and fearful period.

Reports of such parties having been held in secret by some associated with the Prime Minister's Office created intimate and personal anger. Many were utterly appalled that the centre of power, far from being "in it together," as voters had been assured, was flagrantly breaking the rules that they were themselves creating. Social media also noted the serious nature of this discrepancy, where while Downing Street partied, ordinary Britons not only missed funerals but also struggled to home-school their children after having lost jobs.

Analysts have consequently observed that Johnson appears to have "lost his Midas touch" of being able to woo voters other Conservatives were unable to reach. In this context, some strategists on the electronic media recalled how he had come to power as "a social libertarian, low tax Conservative, mainly because it was expedient to do so".

The front pages of British newspapers, as expected, offered little comfort to Johnson after his vote despite the fact that the vote was, as Johnson described it-- a decisive result that allowed him to refocus on his political priorities. The Daily Telegraph called the result a "hollow victory. The Sun tabloid declared "PM survives ... Just". Terming the result as a "pyrrhic victory", the Times leader column also noted that the narrow win left Johnson's political authority badly dented and his party even more divided. In this context it observed that "If Mr Johnson is to avoid leading the Tories (Conservatives) to a calamitous defeat in the next election, he will need to show a degree of grip and focus that has been largely absent so far in his premiership."

Many, within these evolving dynamics, have recalled the situation when the then British Prime Minister Margaret Thatcher survived a no-confidence vote in 1989, a year before she was eventually toppled. She had been advised by her MPs that she would be safe if she ditched her hated poll tax and took a more collegiate approach to the team around her. Johnson also appears to be receiving some suggestions-- but without sufficient clarity.

Reuters and AFP in their reports on the developing situation have pointed out that the British Prime Minister is trying to "shore up his position by setting out a raft of new policies to senior ministers after he survived the confidence vote that revealed the scale of the threat to his position".

In this regard it has been mentioned that politically wounded Johnson is now battling to win back the confidence of his colleagues and the general public. In this regard his close associates are trying to identify least common denominators that will convince his most senior allies, some of whom would have likely run to replace him if he had been forced out, that he will be able to move on from questions about his leadership.

In this context efforts are being made to present him as a leader who is interested in promoting new policies to reduce the cost of childcare and in helping more people affected by the Pandemic matrix to buy their own homes. To enhance his reduced popularity Johnson has also issued a statement that "this is a government that delivers on what the people of this country care about most. We are on the side of hard-working British people, and we are going to get on with the job."

In this regard attention was also drawn by Johnson to his near-future efforts to tackle household expenditure crisis-- from food to energy to childcare and to transport. This will however not be easy due to the cost-of-living crisis. The scale of the inflationary situation has been underlined as the price of filling up the average family car has topped the equivalent of US Dollar 150 for the first time. Rocketing petrol prices are fuelling Johnson's woes.

According to AFP the Organization for Economic Co-operation and Development (OECD) has also warned that Britain must cut taxes or increase spending. Otherwise it might suffer the developed world's weakest economic growth next year.

It may be observed here that the existing rules of Johnson's Conservative Party assures that he is safe from another confidence vote for the next 12 months. However, the electronic media has noted that those rules could technically be changed if there is enough political will to do so.

They have referred to 2018 when Johnson's predecessor Theresa May won a larger percentage of a similar confidence vote only to resign six months later. In previous Tory confidence ballots, Margaret Thatcher and Theresa May scored better than Johnson yet despite narrowly winning their votes, both ultimately resigned after deciding that their premierships were terminally damaged.

Under party rules the current Prime Minister cannot be challenged again for a year. This consequently leaves little time for any new leader to emerge before the next British general election, due in 2024.

However there is also the other side of the coin. This summer, Conservatives could potentially lose two parliamentary seats at by-elections to be held on June 23. If they do, it will be hard for even Johnson's most vocal supporters to claim that the Prime Minister's unpopularity had nothing to do with it.

At that point, other MPs might start looking at their own seats and wonder if they will be able to hold them at the next general election, currently scheduled for 2024. So while Johnson desperately wants to hang onto his job, a large number of his MPs still see this summer as the best chance to remove him from power and install a fresh leader.

To avoid all of this, Johnson will need to turn around his and his party's popularity. This is currently difficult for a number of reasons. The UK is going through the worst cost-of-living crisis it has experienced in decades. Given Conservatives have been in power since 2010, it's hard for them to argue that they still hold the solution. In the meantime, the smaller opposition Liberal Democrats has started urging Tory rebels to resign from their party and sit as independents while Johnson remained the leader.

Leon Emirali, a former ministerial aide in the Johnson government, has also mentioned that while there will be a "big sigh of relief" in Downing Street - there will be difficulties further down the line. Emirali has described Johnson's win as "a razor-thin majority". This scenario has persuaded Luke McGee of CNN to mention that for now, Boris Johnson can breathe a temporary sigh of relief but winning this confidence vote has afforded him only a little breathing room.