Boosting the low productivity in agriculture sector in Bangladesh 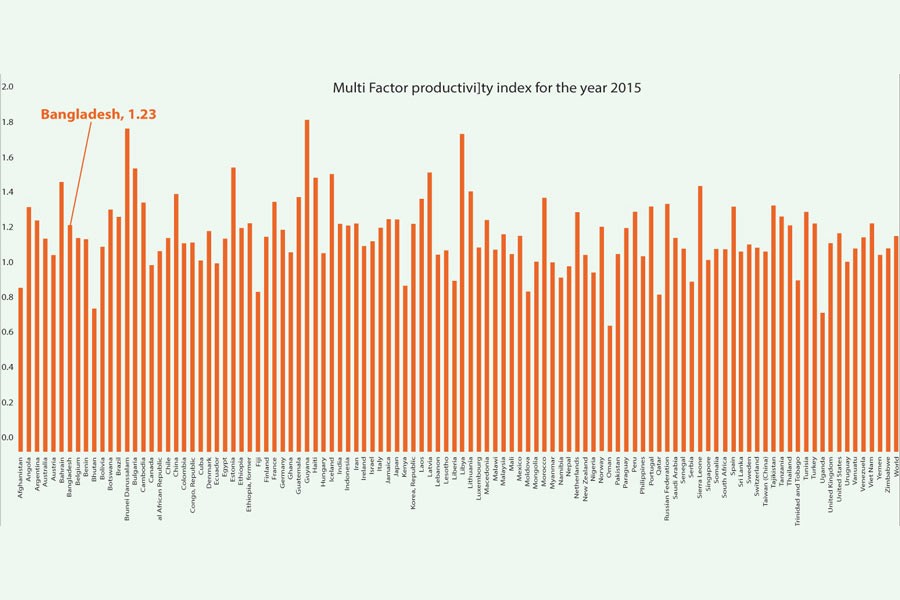 There is no denying that augmentation of agriculture is imperative for the sustained development of an economy. The sector plays a strategic role in the process of development of a country, especially a developing country. Without fully developing the potential of productive capacity of agricultural sector and enhancing its contribution to overall economic and social development, significant progress in promoting economic growth, reducing poverty and enhancing food security cannot be achieved in most of these countries. A strong and vivacious agricultural system forms a primary pillar in the strategy of overall economic growth and development of many countries.

Bangladesh, as a developing country, is no exception. Agriculture is at the core of the economy here. Although contribution of agriculture to GDP has declined in recent times, it still accounts for 14.2 per cent of GDP (BBS, 2017-18). Besides, it remains the largest sector in terms of employment and livelihood, with about 41.0 per cent of the workforce directly engaged in it (LFS, 2016). Also, through its contribution to export earnings and supply of basic food to the population, agriculture is a major sector of the economy. Besides, because of the existence of strong forward and backward linkages within the agriculture sector and with other sectors of the economy, agriculture has been an essential factor in stimulating the growth and generating income for a large number of people in Bangladesh.

Agriculture contributes significantly to economic growth in normal times and can potentially be one of the main solutions to eradicate poverty in Bangladesh. However, failure to swell productivity can be a critical constraint to meeting rapidly rising demand. The graph illustrates the multi-factor productivity or total factor productivity (TFP) index for 108 countries for the year 2015. The data presented in the graph show that the TFP index for Bangladesh is 1.23 which is higher than the average global index which is 1.18. However, there are more efficient countries. The top five countries in the list are Guyana (1.81), Brunei Darussalam (1.76), Libya (1.73), Estonia (1.55), and Bulgaria (1.54). Among South Asian countries, India (1.24) has the most productive agriculture sector. In Asia region, China (1.40) has a better performance.

Although the data for agricultural productivity indicate that Bangladesh is in a good position, we get to know the real situation once we look into the disaggregated data. The 2017 data for Bangladesh show that agriculture and forestry has a TFP index score of 1.01 which is lower than manufacturing (1.08), hotel and restaurants (1.09) and education (1.58) sectors' TFP (GED, 2019). Further, instead of increasing, the growth rate of TFP index has tumbled and it has gone down to 0.7 per cent from 0.9 per cent during the period 2001-2010 to 2010-2014 (IFPRI, 2018).

The average agricultural spending for Bangladesh was estimated to be 8.7 per cent of central government expenditure for the years 2012-2016 (FAOSTAT, February 2019). This is one of the highest government expenditure in the world. The question thus: why has Bangladesh not been successful in improving the productivity level in agriculture despite having one of the highest shares in total government spending? Though there might be many reasons, there are three major reasons contributing to this comparatively low productivity. They are: (i) high cost of inputs, (ii) inefficient investment, and (iii) absence of strong institutions. The TFP rightly segregates the first factor causing low productivity in agriculture sector. TFP is usually measured as the ratio of aggregate output (e.g., GDP) to aggregate inputs. Therefore, high value of inputs ends with low TFP value. In Bangladesh, high usage of inputs is observed in agriculture. Thus, it increases the cost of production of agricultural goods and lowers the ratio of output to input. For instance, it has been found that farmers in Bangladesh use excessive water for irrigation or fertilisers than required. It ultimately increases the cost. Moreover, lack of efficiency in investment has also been noticed. Therefore, though public and private financing is there, agriculture fails to extract full benefit of investment. Productivity level of this sector cannot be improved if the idea of "efficient investment" is ignored. Similarly, absence of appropriate institutions is affecting the productivity level.

To have a sustainable agriculture sector, it high time for Bangladesh to realise the true importance of this sector and undertake required initiatives to take the productivity level to a higher level. For that, Bangladesh needs to lower the cost of production; increase the level of investment efficiency.

The consequential presidential election in the United States

The intriguing, the charming . . . and Ginsburg

IMF lending during the pandemic and beyond

India and the Afghan peace process

Conquering the great divide, the inequality