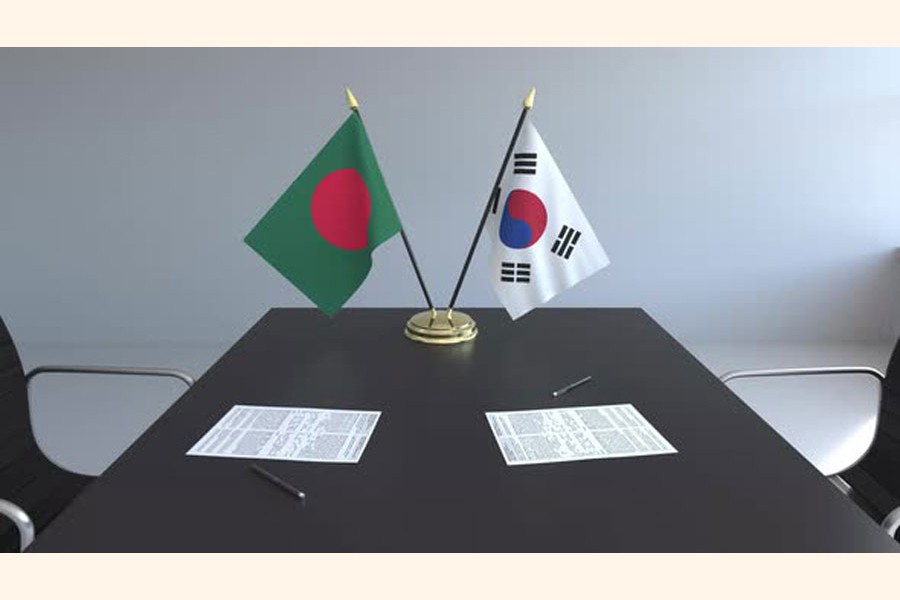 We have celebrated the 50thanniversary of the recognition of the independence of Bangladesh by the Republic of Korea, on  May 12, 2022. We recall with gratitude Republic of Korea's recognition of Bangladesh as an independent state, at a very early stage of our independence, on  May 12, 1972. On this auspicious occasion, I convey my warm and cordial greetings to the government and the friendly people of South Korea. At the same time, I would like to pay my deepest respect to the Greatest Bengali of All Time, Father of the Nation Bangabandhu Sheikh Mujibur Rahman. I recall his charismatic and visionary leadership, which led his people to attain an independent nation-state. After the independence of Bangladesh, Bangabandhu set up the bedrock of our foreign policy framework with the dictum of "Friendship to all and malice towards none" and pursued diplomatic recognition for the newly independent country.

Bangladesh and the Republic of Korea established diplomatic relations on  December 18, 1973. We attach great importance to our relations with the Republic of Korea, our tested and trusted friend and an important development partner. Since the establishment of diplomatic relations, our two countries have been enjoying excellent bilateral relations based on shared values, mutual respect, and common aspirations. In last five decades, our bilateral collaboration has expanded to a wide range of areas, including trade and commerce, investment, development cooperation, education and human resource development, ICT, defence, and cultural exchanges. Currently, RMG sector is our pride and it started with Korean assistance in 1978.

After taking office in January 2009, Honourable Prime Minister Sheikh Hasina paid an official visit to the Republic of Korea in May 2010 and the two sides expressed firm commitment to further strengthen the Comprehensive Partnership between our two friendly countries. The official visit of then Prime Minister of Korea Mr Lee Nak-yon to Bangladesh in July 2019 created a momentum for a comprehensive economic partnership between our two countries.

On the auspicious occasion of the 50th anniversary of bilateral relations, we seek to elevate our bilateral relationship with South Korea to new heights, forging a deeper comprehensive economic partnership based on common priorities with long-term perspectives. I believe unflinching political commitment from both sides and regular high-level consultations are highly essential to this end.

The Republic of Korea remains a major development partner of Bangladesh since long. We are thankful to the Korean government for persistent support through Korea International Cooperation Agency (KOICA) and Economic Development Cooperation Fund (EDCF) for the development projects in Bangladesh, particularly in priority areas such as health, ICT, education, skills training, water treatment, energy, and transport. South Korea's development assistance has surely contributed to our spectacular socio-economic advancement, particularly over the last decade under the visionary leadership of Honourable Prime Minister Sheikh Hasina. We note with appreciation that Bangladesh is one of the largest recipients of the South Korean soft loan as a priority partner country for ODA, and hope to remain a priority partner country even beyond our formal graduation to a developing country in 2026.

South Korea is one of the major trading partners of Bangladesh. The volume of our bilateral trade witnessed a record high in 2021 crossing 1.5 billion US dollars after almost 10 years of stagnation. We appreciate the South Korean government for preferential market access to Bangladeshi products covering 95 per cent of tariff lines. We hope that South Korean government would continue to extend preferential market access to our products even after 2026 so that bilateral trade may continue to grow with favourable balance of trade between our two friendly countries.

The Republic of Korea is the fifth largest FDI source country for Bangladesh with an accumulated FDI stock of over US$ 1.3 billion. Although the Korean companies started investing in Bangladesh in the early 1980s mainly in textile and apparel sectors, Korean investors have now started investing in diverse sectors, including leather and leather products, consumer electronics, mobile phones, home appliances, automobiles, ICT, infrastructure etc. Presently, more than 150 Korean companies have significant presence in Bangladesh.

It is also a matter of satisfaction that Bangladesh authorities and South Korean private investors have selected four infrastructure projects worth of over US$ 10 billion for implementation under PPP model. We are hopeful that South Korean private investments in our infrastructure sector would further improve our economic landscape to tap the potentials beckoning us beyond 2026. I would like to encourage relevant public and private sectors of our two countries to work closely to further deepen our cooperation for mutual benefits.

Another issue, in Bangladesh-- whenever we start a project it takes long time to finish. I have many examples. Suppose, it should be finished in three years' time but it took more than ten years causing extra expenditure to the public exchequer.

In Korea they had also similar situation before General Park Chung-hee came to power. But in order to finish the projects on time, they introduced few rules. One is that a Project Director cannot be changed until the project is completed. And if a project is completed on time or before time, the concerned Project Director, irrespective of seniority, would be given strategic position or promotion and also other incentives. And if any project is delayed and not completed on time, the concerned Project Director or person involved in the project completion would be punished or demoted or even would be jailed. This condition, under General Park, made significant change in the implementation of the projects. Currently, South Korea ranks number one in the world in terms of enforcing contracts. This is an area where we need help and our friendly nation South Korea may share their knowledge with us.

The other area that South Korea has been putting lot of efforts is innovation and technology. In Bangladesh we are also very keen to improve in this sector. We would like to have some advice from South Korea while we are jointly observing our 50th anniversary of diplomatic relations. We are looking forward to a more comprehensive partnership with South Korea to build a knowlege-based, developed, prosperous Bangladesh by 2041.

Cooperation between Bangladesh and the Republic of Korea in the multilateral fora has been excellent. Bangladesh strongly believes in the centrality and legitimacy of the UN as the custodian of global peace, security and development. Our commitment to international peace is manifest through our flagship UNGA Resolution on 'Culture of Peace and Non-violence'. Our peace leadership is further reaffirmed through our support to the UN as a top troops and police contributing country in its peacekeeping endeavours. We appreciate South Korea's strong commitment to promoting international peace and security through participating in UN's peace and security activities. Bangladesh will continue to support all international measures for denuclearisation of the Korean Peninsula.

As the Chair of the Climate Vulnerable Forum (CVF) and V20, we are promoting the interests of climate-vulnerable countries. We appreciate and welcome the firm commitment and growing role of the Republic of Korea on global climate change issue. Bangladesh highly appreciates South Korea's recent adoption of climate roadmap to reduce the carbon intensity of its economy and its commitment to help the developing countries in their transition to low-carbon economies.

We are thankful to the South Korean government's humanitarian support for the distressed Rohingyas and also for support at various international fora, including in the UN General Assembly, on this issue.

South Korea has a very good relationship with Myanmar. Over the last few years, its investment package to Myanmar has been very significant. Given the very good relation with Myanmar, we hope South Korea would take extra initiatives, a proactive action so that the displaced people of Myanmar (Rohingyas) return to their homeland. Myanmar is our neighbour, our friendly country, and they are not our enemy. We have been supportive of Myanmar during their bad times. So, we hope Myanmar will keep their words as they agreed to take their people back. They also agreed to provide safety and security, they agreed to create conducive environment for their safe and dignified return.

We urge the international community, including the South Korean government, to keep pressure on Myanmar for addressing the Rohingya plight and bringing a peaceful resolution of the protracted crisis for the security and development in the region.

We wish all the very best to our friends in South Korea and also the Korean people in Bangladesh. As we cross the milestone of fifty years of friendship, I am confident that together we can build a peaceful and prosperous future for all.

Dr A K Abdul Momen, MP  is the Foreign Minister of the Government of Bangladesh