An overview of IT sector during the pandemic 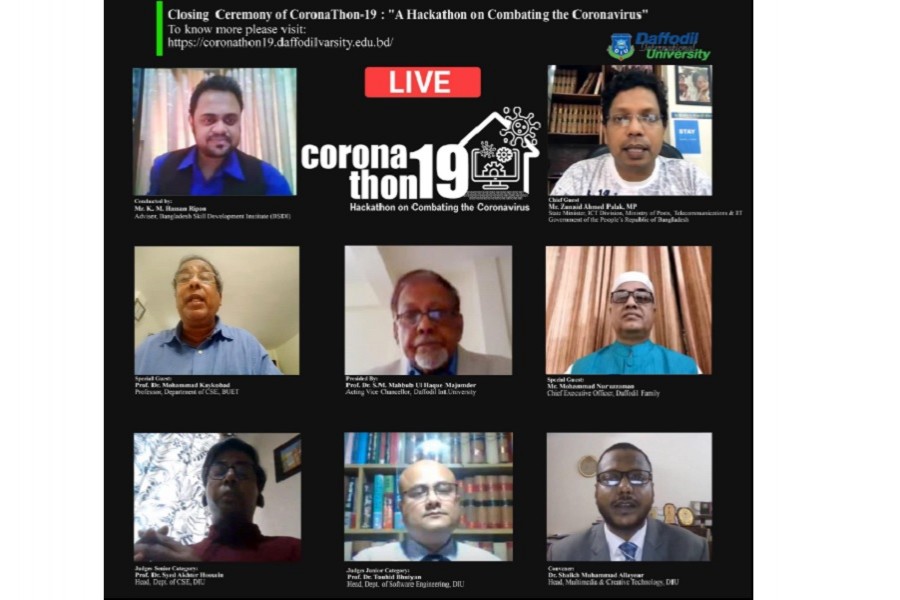 ---Photo for representational purpose only

The Economic Research Group (ERG) had undertaken a survey of enterprises in May 2020 and the findings were reported in the Financial Express on June 11. The IT firms included in that survey were found to be in e-commerce, web development and other IT services, representing non-software IT firms (NSW-IT). Subsequently, another survey was administered in June on a sample drawn from BASIS member list, all of whom are into software (SW-IT). The respondents in both the surveys were senior executives of the firms -- 30 in total, 28 of which are located in Dhaka and two in Chattogram. Compared to the SW-IT firms, the NSW-IT firms use comparatively low skill and technical expertise. As expected, the SW-IT firms are relatively more export-oriented, while the NSW-IT firms largely depend on the local market. This paper contrasts between the two groups in areas of immediate effects and coping strategies those firms adopted.

Since there is a difference of one month between the two surveys, findings presented need to be interpreted accordingly (for NSW-IT, June figures provided in this paper are expected).

WORK ORDERS: Immediate effect felt by the IT industry was with work orders - full cancellation was reported by 13.30 per cent in each of the two segments. Rest of the firms in the non-SW segment reported partial cancellation, while more than half of the software firms reported no cancellation. A decline in market demand is reported to have been in foreign demand, though some of the SW firms reported being facing a decline in the domestic market as well. However, on the net, an increase in domestic demand for the IT services has been reported by both groups of firms. Higher reduction in work order is reported by SW and this appears to have preceded the pandemic (see Figures 1 and 2). Though more than half of the SW firms did not face cancellation of orders, the value of current orders is reported to be less than one-third of that negotiated in 2019.

A decline in work orders was associated with disruptions in regular office works as a result of the fear and declarations on lockdowns. Firms were forced to adapt and have employees work out of home, which was more prominent in May. A recent survey suggests of increase in the incidence of working out of offices. There appear to be two reasons: (i) Compared to May, there has been an increase in workload, particularly, due to increased demand from local markets; and (ii) difficulties of monitoring, particularly, for NSW IT works. Contrary to common beliefs, software firms face greater difficulties to ensure higher productivity from employees working from home. Almost three-fourth of these firms complained of internet problem, while 60.0 per cent found coordination difficulties as hindrances. While a noteworthy switch to online activities is anticipated, none of the surveyed NSW firms expressed willingness to allow employees to work out of home, while one-third of SW firms may avail such option.

COMMUNICATION: IMO, followed by Facebook Messenger, are found to be the most popular communication tool used by the non-SW IT firms. About 20.0 per cent of NSW segment reported of using WhatsApp and/or Skype as well. Those routes are rarely availed by the software companies, with none mentioning of IMO. Among the latter, Zoom and Google Meet are availed by most (60.0 per cent), with 47.0 per cent reporting use of Slack, and only 12.0 per cent reported use of JIRA.

All companies have their offices in rental premises, which generally have one to two years' contract, some ending during end 2021. Majority of the non-SW firms had been regular in rent-payment till the month preceding the survey, but 80.0 per cent went irregular from May. While the majority of NSW firms wanted to defer rent payments by at least three months, 20.0 per cent want to delay by five months. In contrast, almost 70.0 per cent of the SW firms, even though surveyed a month later, was up to date on rent payment. Further details are in Figures 6 to 8.

MARKET DEMANDS: While work-order reduction faced by SW has been higher than that faced by NSW, the latter is 'micro' firms and are more fragile against adverse situations. If the current situation continues, 50.0 per cent of the NSW firms may have to fold their offices from current premises by mid-September and others reported of doing so by the end of November. The pace of attrition is reported to be slower for SW firms, with a difference of one to two months. It is expected that businesses will relocate unless there are downward adjustments in office rents, which will adversely affect the property market, especially the high-valued ones. The final adjustments may, however, favour lower-valued properties if businesses survive.

In this pandemic, see Figures 10 and 11, the work order for the apps and web development are reported to have increased. Most of such increases originated from local IT and e-commerce sectors. There has also been an increase in demand for health-related software and apps.

EMPLOYMENT: Unlike some manufacturing and other service sectors, the firms are reported to have paid salaries of the employees till April/May 2020. There had however been a reduction in employment to the tune of 7.7 per cent to 14.4 per cent, felt more in the SW segment. In case of support staffs in SW, where the group accounted for only 10-12 per cent of the total number of employees, one in every three had been dropped by end May. If the situation continues, further reductions in employment over July-December period are anticipated - 5.6 per cent for NSW and more than 12 per cent reduction in SW (professional plus support)) employment.  Furthermore, those remaining in employment may have to face reductions in their take-homes, 14 per cent in NSW and a 27 per cent reduction in SW firms. The ability to survive, expressed in terms of the maximum number of months the firms may continue to pay salaries, show cumulative distribution of firms (in Fig 13) similar to that observed for retaining of office space (Fig 9).If the pandemic continues, the NSW firms can give the salary to their employees for up to two-four months while some of the better-off software (SW) firms may do so for up to seven-eight months.

LIVING THROUGH COVID-19: Both groups of IT firms require at least 18-24 months for their businesses to return to normalcy if the virus spread comes under control from the following month. 87.0 per cent of the NSW will take two years to recover, while only one-third of the SW firms reported of such long delays.

Most of them, as of mid-June 2020, are struggling to find ways out, and the majority are yet to come up with ideas and strategies for change to adapt to the Covid-19 pandemic and beyond. Almost half to two-thirds of the firms are caught with the elusive idea of the stimulus package from the government and are seeking easier access to avail it, none yet reported any progress.

Assistance and general supports sought by the IT firms differed significantly in the mix of recommendations. As shown in Figure 14, NSW firms are keen to get loans at low-interest rates (53.33 per cent) and avail stimulus package (66.7 per cent) to continue paying salary to their employees. The SW firms see the prospect of progress amidst the current crisis and find 'corruption-riddled' governance and unfavourable tax measures as major hindrances.

SUGGESTIONS: Without any attempt to summarise the findings, the researchers recognise the need to make way for the IT sector to develop when local markets and domestic economic activities need to be further inter-linked. Drawing upon the findings and numerous consultations with stakeholders, several suggestions are made below.

* Quality of broadband connectivity needs to be significantly improved and the regulatory authorities need to find ways to protect the right of business and private citizens (many of whom will be working out of home for businesses) in ensuring that the service providers deliver the required minimum bandwidth. If there are issues with a bandwidth that bring additional profit to ISPs, rules may be put in place to ensure auto-transfer of such unearned income (or a part of it) for investment on expanding the capacity. Improved security arrangements by law-enforcing authorities with the assistance of local community groups may reduce the private cost of maintaining undisturbed cable connections. The latter, along with mandatory online payment (that can be easily monitored) will ensure fair business and reduce costs. No additional cost must be imposed on connectivity that provides Covid-period livelihood.

* All procurements of ICT-related services need to give priority to local firms, keeping in mind the fact that there is equity participation of foreign agencies in many of these firms, and more importantly, some of the local firms may only act as commissioning agents for foreign firms!  The need of the hour is to promote local economic activities with minimum dependence on external procurements. It is common knowledge that the latter is associated with corruption and capital flight.

* While online engagements to carry out business will increase, for various reasons noted earlier, businesses, even in software firms, will primarily rely on office-based work. Unfortunately, the health guidelines that are localized and affordable to our micro and small businesses and are implementable within existing building structures (where offices are housed), have not been developed. It is important to encourage open exchanges on good and bad practices, without yet being legalistic about it.

The report is based on one of the follow-up studies that ERG undertook at own initiative.

Eid, Nobo-borsho and other festivals