A deal is reached at COP27 but with what prospect? 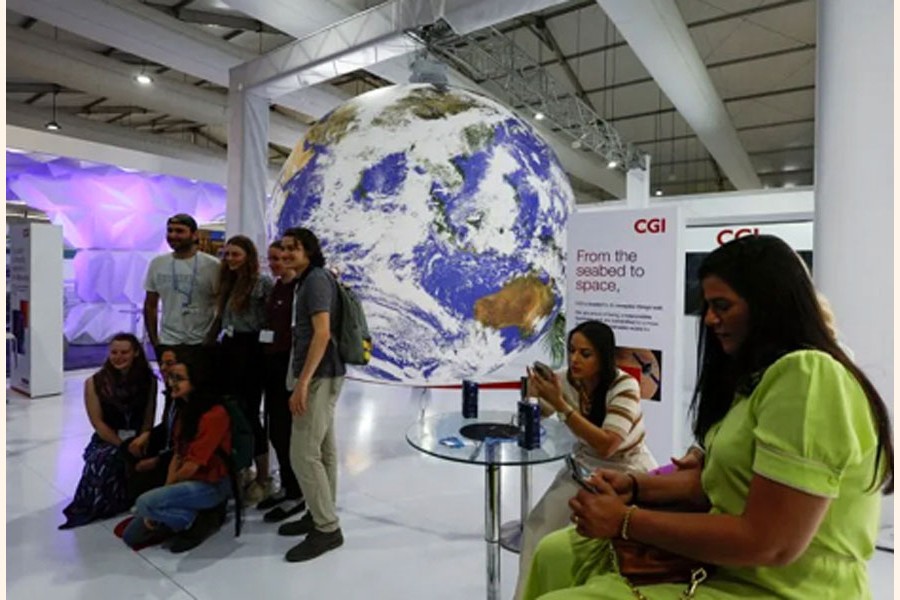 As is customary, almost de rigueur, the conference of parties (COP) on climate change held in Sherm el Sheik, Egypt, went into overtime and reached a deal late into the Sunday (November 20) night. Another milestone was passed under the UN Framework Convention on Climate Change(UNFCC),  holding annual meeting of COP numbering 27. The opening event was attended by all heads of states or governments except those of China and Russia, both major actors in climate change, the former as the second greatest user of fossil fuels and polluter and the latter fourth largest producer of fossil fuels, the main factor behind global warming. It was not an auspicious beginning for collective agreement on climate change, to say the least.

At the end of the extended session of COP27, the night ended into dawn but daylight did not usher in heightened confidence and hope for the future. On the contrary, there was a good deal of disappointment and dismay. Surprisingly these sentiments voiced by developed countries, whether genuinely or pretentiously, were not clear. The European  Union (EU) lamented the slow pace of achieving the carbon emission target of 1.5 degree celsius reached unanimously at Paris Climate Agreement in 2015 and its delegate opined that 'no climate deal' was better than a bad one. Germany's delegate termed the outcome as one of 'hope and frustration' while France regretted the absence of 'ambition' in tackling the crisis of climate change, especially curbing carbon emissions. The UN, the sponsor of COP, simply said a political deal has been reached, which was not only cryptic, but ambivalent. Among the developing countries Pakistan was effusive about the agreement to establish a fund for 'loss and damage', terming it as a 'pivotal' turning of the page in climate talks and a significant step towards justice. It was not surprising because they used to making snide remarks about floods and cyclones in former East Pakistan as nature's wrath.

Unlike previous COP summit, COP27 discussed 'loss and damage' at length, from the beginning to the end, almost to the exclusion of other exigent issues. In all previous COP summits the issues  discussed were in order of priority :mitigation (curbing carbon emission to keep rise in global temperature within 1.5 degree celsius above pre-industrial level, adaptation (making adjustments to present and future climate change) and climate finance (payment  to developing countries ravaged by extreme weather conditions for mitigation and adaptation). A greater part of the discussions held in past COP summits centred on the first issue, climate change through rise in the level of carbon emission caused by use of fossil fuel, a phenomenon backed by painstaking research and findings of climate scientists across the world. After remaining a contentious issue (about the authenticity and reliability of scientific findings) the fact of increasing carbon emission ( CO2) leading to global warming has now become a conventional wisdom. COP21 summit in Paris in 2015 was a watershed event because there all countries (196) agreed to limit global warming to well below 2 degrees, preferably to 1.5 degree celsius, compared to pre-industrial level. According to the landmark Agreement all signatory countries would strive to achieve net zero emission by 2050, enabling land, sea, and forest to absorb carbon emitted, annually. The Paris Climate Agreement also restated a commitment made in 2009 that the world's richer countries  should provide US dollar 100 billion annually by 2020 to help developing countries to adapt to climate change and switch to renewable energy (mitigation). Their contribution to this Climate Finance would increase after 2025.

Till 2019, only US$79.6 billion was contributed under climate finance agreed upon long before Paris Agreement, in 2009. According to a recent UN Report the US$100 billion goal set in Paris Agreement would not be reached until 2023 even though a new and more ambitious target is to be set for 2025. In addition to the climate finance for mitigation and adaptation, developing countries had demanded  that 'loss and damage' be included in climate finance as an agenda item as specific compensation to cover losses they are  incurring from the effects of climate change. But developed countries sidestepped this issue apprehending any agreement would suggest they accept liability for global warming and would be tied into decades of repayment as compensation. The Paris Climate Agreement recognised  loss and damages that are not amenable to 'adaptation' measures because in spite of optimal  adaptation, severe damages may still occur. But this recognition did not merit a separate consideration and was treated as a subset of ' adaptation'. The 'Warsaw mechanism', two years before Paris COP19, categorised loss and damage as included under 'adaptation' which did not satisfy the  Least Developed Countries (LDCs) and the Alliance of Small Islands States. In the face of opposition by developed countries led by America, the Paris Agreement of 2015  called for 'averting, minimising and addressing loss and damage' but specified  that it cannot be used as the basis for liability. In the event, the Paris Agreement adopted the Warsaw Mechanism, an instrument that attempts to address questions about how to classify and share responsibility for loss and damage. The issue was put into mothball, not even in the backburner.

The agreement to establish a fund for' loss and damage' in COP 27 has upended the agreement made in the Paris Climate of 2015.In the, COP27 summit this almost became a make or break issue, with least developed and small island countries up in arms, so to speak. What made it a hot button issue is the series of unprecedented natural disasters like flood, drought and severe storms that devastated a number of developing countries immediately before the COP27 summit.  In the face of recent memory and in view of the insistence by the affected countries to have compensation from major polluters, developed countries relented. But this political deal, as the UN has billed it, may be a hollow promise without substance as it comes with a catch. Following tense negotiations that ran through the last night of negotiations, a draft was released for the Plenary Session in the morning of 20 November. The Plenary Session approved the draft document that included the provision for establishment of a fund for 'loss and damage' to help countries to bear the costs of climate- fuelled events like floods and storms. However, the most contentious issues of who will contribute and  how much were pushed to the talks to be held in the next summit in 2023. COP27 passed the deal for establishment of a fund for loss and damage as a declaration of intent to save the conference from a deadlock. It simply passed the buck to the next COP. A Transitional Committee will now  make recommendations to the COP28  next year for approval and adoption  of the proposals regarding the donor  countries and their contributions. So, as the old English saying goes, it is a long way to Tipperary. The attitude of developed and emerging countries like China and India to this fund remains problematic. Not by coincidence, America and China, two major polluters (40 per cent of the total CO2 emission) were reticent and non-committal on the issue during COP27. The American chief negotiator, John Kerry all on a sudden fell sick raising suspicion among sceptics. The EU made it plain that its contribution to the fund is contingent upon similar and proportionate contributions by all developed and emerging countries that should include not only China but also India. Under the circumstances, it is nothing short of a pipe dream to hope that concerned countries will own up their responsibility for causing damage, far less to agree payment of compensation. Their record in contributing to the Climate Finance that was supposed to meet the target of US$100 billion by 2020 does not engender hope that they will be generous with their purse strings and not at a time when they are facing economic crisis of their own. Though a fund has been established to placate the climate battered countries, it is most likely to be a still born child. Under the most optimistic scenario, developed countries may contribute to this new fund but that will be at the cost of decreasing the amount contributed to climate finance fund for adaptation. The result will be a sort of zero sum game.

Instead of waiting for the pie in the sky, it is better and pragmatic  to press on with the main tasks laid down in the Paris Climate  Agreement that enjoins all signatory countries to annually fix nationally determined contributions (NDC) for carbon emissions to ensure that the threshold of 1.5 degree celsius of pre-industrial level is not exceeded. Secondly,  the  progress towards the target of  net- zero emission of CO2 ( absorbable by trees, land and ocean)  being made by signatory  countries for whom the targets are legally binding in terms of preparation of NDCs should be rigorously  reviewed collectively  in the annual climate summits. Unlike Kyoto Protocol of 1997, the Paris Climate Agreement makes it mandatory for all signatories, (196 countries) developing and developed, to prepare their annual plan of actions for mitigation and adaptation. This Agreement is as comprehensive as a pragmatic response to the gargantuan problem of climate change crisis requires. At the front and centre of Paris Agreement is anchored the task of cutting carbon emissions that has exacerbated global warming. That implies reducing dependence on use of fossil fuel for energy generation. The definitive and lasting relief  from the damages of global warming  lies in curbing carbon emissions which cannot be superseded by other issues, however urgent. All measures relating to climate related other issues are nothing more than palliatives, and that too uncertain of forthcoming. Unfortunately, in the midst of the intense debate over the fund for loss and damage the increasing use of fossil fuel like coal following the Ukraine war went almost unnoticed. The euphoria over the deal to have a loss and damage fund has been exaggerated and premature.

Instead of running after the will-o'-the wisp of loss and damage fund, developing countries should concentrate their bargaining power with developed countries on meeting their obligations to meet carbon emission targets and contribute to Climate Finance to help them for mitigation and adaptation. Enhanced and regular contributions to Climate Finance by developed countries, to which they are committed, should take care of loss and damage under the 'adaptation' component. In addressing the issues of climate change, there is no need to re-invent the wheels now.