Urbanisation in an environmentally sustainable way 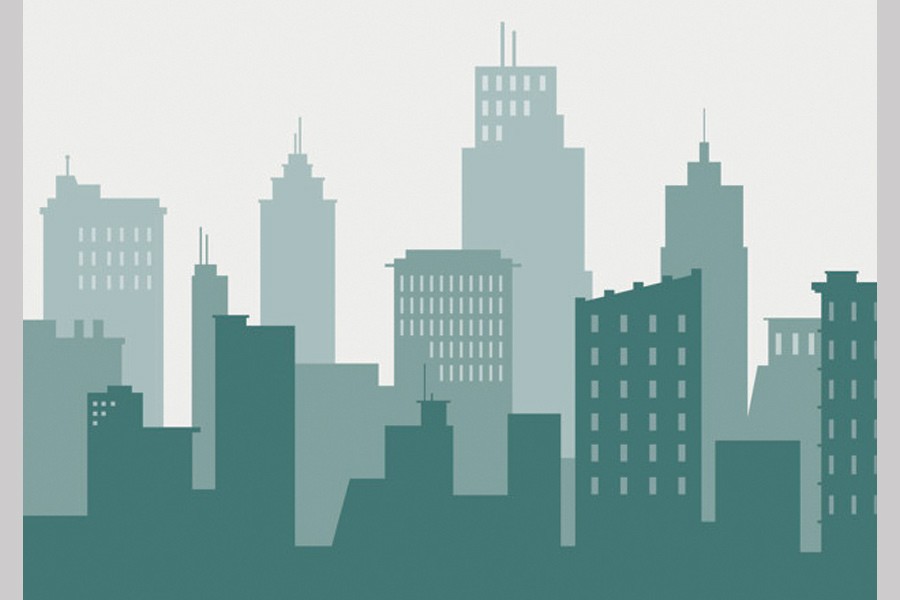 Bangladesh is losing 2.7 per cent of its gross domestic product (GDP) each year due to environmental degradation mostly in urban areas, according to the findings of a recent World Bank (WB) study. Rapid and unplanned urbanisation is causing severe air and water pollution in the towns and cities.

In fact, the entire nation is losing one per cent (around Tk 200 billion) of the GDP every year due to air pollution. Indoor air pollution is causing a further 0.6 per cent GDP reduction.

In addition, inadequate water, sanitation and hygiene facilities are costing the country 0.4 per cent of its GDP. Another 0.5 per cent GDP loss is due to workplace environment risks. The country's GDP stands at nearly Tk 20.88 trillion as per the latest data of Bangladesh Bureau of Statistics (BBS).

The WB analysis has also found that 5.3 million people in the country will be vulnerable to the effects of climate change by 2050, while this will also lead to reduction in agricultural productivity, increase in malnutrition and decrease of water availability.

The pollution in Dhaka alone is so grave that around 0.6 million residents are exposed to lead contamination, which can cause IQ loss and neurological damage, especially among children. Again, for just one tonne of fabric, the dyeing and finishing factories discharge 200 tonnes of waste water into the rivers, leading to health hazards in the capital's poorer neighbourhoods. There are a total of 719 such washing, dyeing and finishing factories in and around Dhaka.

The cities in Bangladesh are also highly vulnerable to water-logging and floods due to wetland encroachments and lack of waste management systems. For instance, Pabna lost nearly half of its wetland since 1990. Now, it is facing prolonged water-logging.

According to a latest report of the Economist Intelligence Unit (EIU), Dhaka ranks as the third least liveable city in the world. Damascus in war-torn Syria remained the worst-ranked city, below Lagos in Nigeria and Dhaka.

Unplanned urbanisation and industrialisation are, in fact, affecting both big and small cities. It increased the amount of waste generated, without proper collection and disposal, and led to water-logging in the cities. Dhaka has one of the highest levels of air pollution. Nationally, both ambient and indoor air pollution alone causes about 21 per cent of all deaths in Bangladesh, which is the highest among South Asian countries.

The portion of permanent wetland in the capital city Dhaka has decreased from 14 per cent back in 1996 to 4.0 per cent in 2009. Every year, the government allocates enough money for digging ponds or canals across the country. But when that money flows to the grass-roots level, it is found that almost 50 per cent of the canals have not been dug or 17 per cent of the ponds have not been excavated.

The brick kilns are the biggest polluter of air. They contribute 38 per cent micro-pollutants while motor vehicles are responsible for 19 per cent, road dust 18 per cent, solid dust 9 per cent and metal smelters 7 per cent. Another major problem is lead. Nearly 600,000 people living in 59 hotspots in Dhaka and its adjacent areas are exposed to lead contamination.

However, experiences around the world show it is possible to develop greener and cleaner environment. A National Environmental Protection Agency or Authority can be created in Bangladesh with a mandate for pollution management, including countrywide industrial waste water management. There is the need for establishing a training centre to build awareness and capacity on environment management across all levels. A functional review of the Department of Environment (DoE) and increasing its staff members according to international norms are required for strengthening the capacity of its divisions and district offices on a priority basis.

Meantime, the government should incorporate wetlands into urban planning and invest in waste management to improve the cities' resilience. It should provide incentives to industries to adopt green and clean technologies and enforce polluter's pay principle -- a practice that those who are responsible for pollution should bear the costs of managing it.

There is also a need for further scaling up Resource Efficient and Cleaner Production (RECP) initiatives, as those may lead to efficiency gain, lower resource use and reduced pollution discharge.

Rapid urbanisation has also led to wetland encroachment. In the last 40 years, Dhaka lost about 75 per cent of its wetlands. The filling of wetlands and development of high-rise buildings on sand-filled areas exacerbates earthquake risks for urban dwellers in these areas. Smaller cities, like Pabna, also suffer from environmental degradation.

The country requires a more effective policy and legal framework and stronger institutions at both the national and local level to control pollution and sustainably manage the environment. Bangladesh also needs to scale up green financing, promote resource efficient and cleaner production, improve the hazardous waste management system, and raise awareness about the high health and economic costs of environmental degradation.

In fact, development in the country often comes at the cost of environment, which ultimately affects the long-term sustainability of growth and progress.

Strong coordination and collaboration among the government, the private sector and the civil society is required to reverse trends, shift the country towards a greener development path and scale up clean technologies. As Bangladesh is rapidly urbanising, what is required at the moment is that the country should be able to manage the urbanisation and industrialisation process in an environmentally sustainable way.