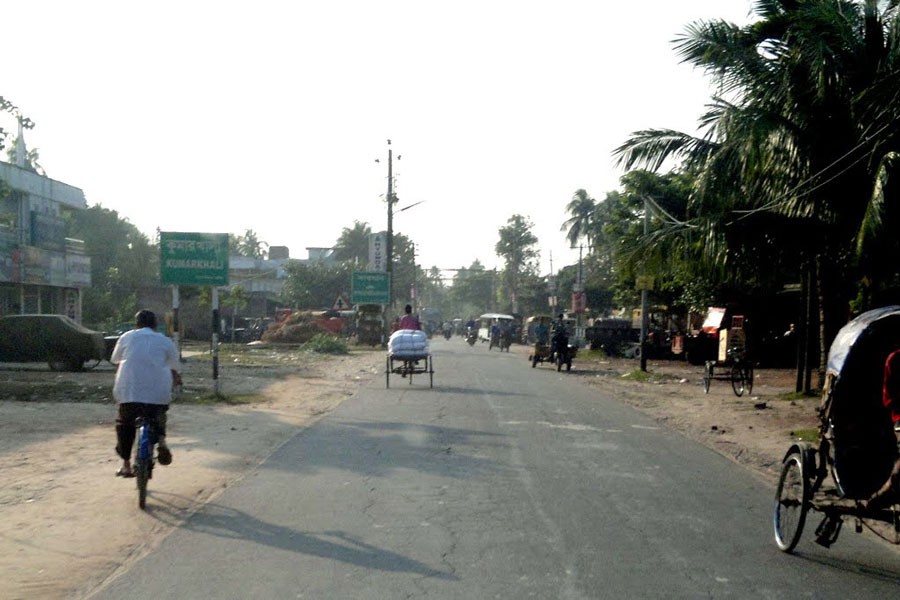 Since I visited Bangladesh in October of 2009, accompanied by my wife, I found this time there has been diametrical change,  good or bad. A huge number of flyovers have been built in and around Dhaka city, capital of Bangladesh, to ease traffic jams, but a huge number of cars, buses and rickshaws could not cope with traffic jams. A passenger in car, rickshaw or auto-rickshaw remained seated at least two hours or so before reaching a destination. During office hours and after office hours travelling by any transport in Dhaka city makes life miserable, to say the least. Government may consider introducing the Greater Dhaka sustainable urban transport project, which is in fact in operation along Gazipur-Joydevpur-airport, in Dhaka city to replace the private bus service in the city.

Another development came to the notice that a huge number of multistoried building sprung up in and around Dhaka city. Proper passage in between two buildings is lacking which makes a traveler a bit difficult to reach a destined house. This writer found such a situation at Pallabi in Mirpur area. It is understood that Rajuk (Rajdhani Unnayan Kartripakka) was established to approve proper planning to build a house in Dhaka city according to the city plan. This writer feels the way buildings in all sizes are coming up, Rajuk was possibly ignored by planners. There are reports that Rajuk indiscriminately gives permission to developers to erect buildings without leaving space for the garden and trees. Developers are reported to have occupied canals, ponds, playgrounds like that of Mirpur 13, Sheraton hotel staff quarter, football fields, etc. Apart from unhealthy planning, it needs to be understood that Rajuk should be responsible if any such skyscraper comes up withoutcomplying with the building code. Dhaka city is reported to be in an earthquake zone.

Another development appears to be overcrowding Dhaka city as a result of influx of people from rural and urban areas of adjoining districts. According to a report, population in Dhaka would be around 19.84 million at the end of this year. Possibly this has been the trend because of the lack of job opportunities. Therefore, it is imperative to decentralise administrative units and urge upon the private sector to outsource their projects out of Dhaka to Savar, Manikganj, Gazipur, Ashulia, etc.

There is a lack of discipline on the roadside. In spite of a huge number of road-crossing over-bridges in the city, people are crossing the roads in between standing buses or cars as well making things unpleasant. It means a lack of civic sense prevails among the people. Another odd situation that came to the notice of this writer was that beggars plus hijras (transgender population), were approaching passengers in cars or rickshaws for money. In this connection, this ascribe agreed with the write-up by Mr. Shamsul Huq Zahid that ''any one refusing them to pay does face abusive and filthy languages. Often, they make obscene and highly objectionable physical gestures in public''. Begging in front of car, rickshaw or auto rickshaw should be stopped by traffic police or patrolling police. This has caused bad name for the country.

The beauty of the city has been spoiled by setting up tiny shops on the roadside. These shops should not be allowed to operate at all. Cleanliness becomes godliness. Heap of dust was seen piled up in the different corners of the city. City corporations should consider placing a dust bin at every corner of the city to throw garbage. There is a need by two municipal corporations to improve the situation to get rid of nomenclature" as one of the least safe cities in the world".

There is hardly any need to emphasise that the authority should take immediate measures to root out from roadsides unroadworthy buses which cause emission of black smoke, apart from non-existence of signaling appliances and reckless driving. This writer came to notice the reckless driving of busses from Goalando in Rajbari district to Kushtia district via Jhenaidah in Khulna division. Kushtia town is also having the skyscraper buildings and shopping malls as well to cope with the needs of increasing population. There is no complaint to see the road condition from Goalando to Kushtia via Jhenaidah but this writer feels uneasy to see the road condition in many places from Kushtia to Goalando via Kalukhali and Rajbari. I was told some areas were under development to expand the sizes of roads.

There is a positive development that came to my notice while travelling from Kushtia to Goshbillah and Alamdanga in Chuadanga district to see greenery all around the countryside. People are taking an interest in planting a huge number of mango, banana, coconut and lychee trees.

Coconut waters are on supply in Dhaka city and Kushtia for sale to quench thirst of the people. Humidity in Bangladesh this summer time was huge and practically unbearable. April to June this year was the record-breaking hottest months in Bangladesh.

It is really amazing to note that the government has introduced a national identity card for its citizen and every citizen, rich and poor, is having a cellphone around the country to communicate easily.

Last but not the least, visit to historically important Kumarkhali too in Kushtia district is worth paying where this writer witnessed two functions: Foundation laying ceremony of the fourth-storied building of J.N High School established in 1928 along with awarding stipends to 12 students from Akbor Hossain Chatrabritti Kalyan Trust on June 9. Under the chairmanship of President of the school  Mr. Nuruzzaman Khan the function was attended by newly-elected member of the Parliament, Barrister Selim Altaf Jorge, Upazila Chairman Mr. Abdul Mannan Khan and Mayor Mr. Shamsuzzaman Khan of Kumarkhali Municipality, one of the oldest municipality of the country and this writer, founder of Akbor Hossain Chatrabritti Kalyan Trust ,who added another one lakh taka to the fund which now stands at two lakh thirty thousand for the benefit of poor and meritorious students of the school every year. On June 8 this writer was invited to join a gathering at M.N.High School near Gorai river at Kumarkhali. This school was established one year before the establishment of Calcutta University. That means in 1856. A number of speakers, including retired Secretary to the Government Kazi Aktar Hossain, have spoken against adulterated food, smuggling, corruption and the drug addicts. It was proposed to work with administration to take action against adulterated food, drug addicts and smuggling.