Trapped in a cycle of vice and vengeance 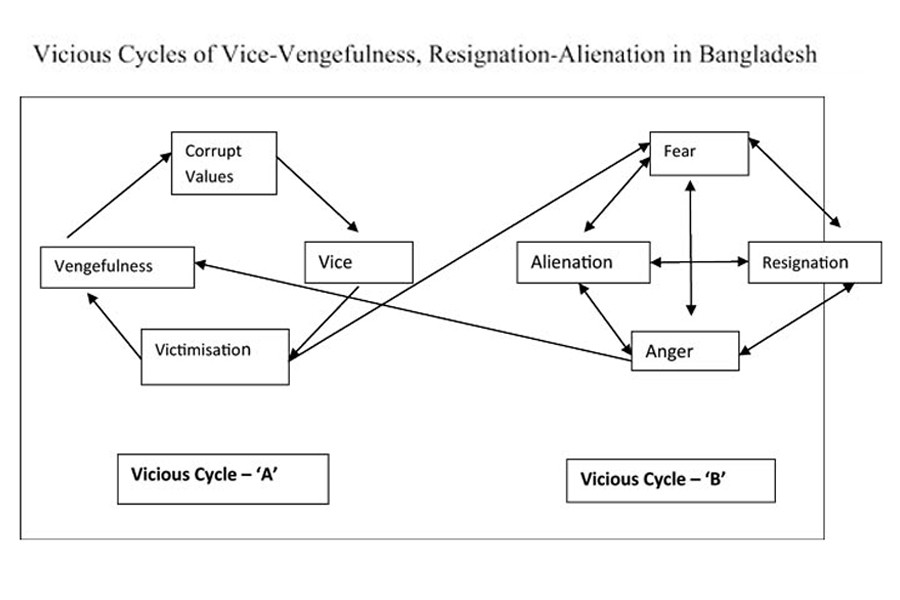 It is a tragedy that the administrative tradition of British colonial rulers still seems to persist in many ways in present-day Bangladesh. Sadly, socio-economic and technological advances over two centuries have not yet been able to completely erase some fundamentally similar modes of misuse of power and the tradition of irresponsible-cum-unaccountable conduct in administration.

The colonial government was built upon the concept of authority. With deliberate effort, the image of the government was developed as remote, stern and all-powerful, and that effect was attained through many devices. In Bangladesh, most of those devices have survived. The officials maintain a great distance from the people and are not easily accessible to them. They continue to remain as isolated from the people as they had been in the colonial period (Ahamed, 1981). As India's first prime minister Jawharlal Nehru observed way back in 1949, they speak from a noble and unattainable height, secure not only in the conviction that what they say and do is right, but that it will have to be accepted as right whatever lesser mortals may imagine, for theirs is the power and the glory.

On the basis of a near universal experience of the common people, and for the purpose of analytical convenience, it may be argued that the bureaucratic responses in Bangladesh reflect one or more of the following traits: Apathy (A), Evasiveness (E), Immorality (I), Obstructionism (O), and Urge for Unwarranted Authority (U) (Ray and Mamoon, 1987). An ordinary individual who is in need of a perfectly legitimate service from a government office but who does not chance to deal with a functionary belonging to the tiny conscientious section, and who does not have or does not want to use suitable administrative/political connections is sure to confront AEIOU-separately or jointly. Corruption, as is observed in Bangladesh bureaucracy, can obviously co-exist with one or more of these A,E,I,O,U.

As a participant-observer in bureaucracy from 1986 to 2016, the present scribe conducted a few attitudinal surveys on the levels of honesty and the practice of corruption among his peers. The samples were taken on the basis of personal relationships with 30 civil servants working in districts, departments and ministries during the years 1986, 1992 and 1998 (Ahmed, 1999). It was found that whereas 40 per cent of these officers were corrupt at the start of their career, the proportion swelled to 70 per cent after 6 (six) years and 90 per cent after 12 years. The following model has been developed by the present scribe.

In line with various models of social development, there seem to be numerous vicious cycles in Bangladesh - all leading to abject poverty, underdevelopment, exploitation of the weaker segments of society and a cycle of wholesale corruption and immorality. Instead of using merely economic variables or indicators, a model based on the moral dimension and social value system and composed of two related cycles can also be put forward. A diagram describes the two related cycles, which may explain the behaviour of service-providers and service-recipients in the country's public sector.

Now, first of all, what is wrong with the values? In the opinion of many, it is a blurring of distinction between virtues and vices resulting from parochialism, selfishness (putting self and family ahead of society, community and nation), excessive greed, lust and egotism, and a lack of understanding of religious-cum-moral values.

As in other societies, vices take many forms in Bangladesh ranging from violence, immorality and injustice to corruption and victimisation. But what is most striking is that, there is a tendency among many corrupt people to cover up or neutralise their vices through religious rituals. These people seem to believe that in religion they have found a mechanism by which they can offset or neutralise even their acts of corruption or crime.

As corrupt or polluted values give rise to various forms of vices, most importantly corruption in state machinery, vices in turn lead to victimisation of the ordinary people. To get anything done - be it land transfer, taxation, utilities, law enforcement, litigation, bills, licensing, public sector purchases, and even recruitment of employees, bribes are often required. This happens most often where the officials have discretionary powers, there is lack of transparency and accountability in work, and the chain of command is conducive to corruption. In many cases, it is a syndicated or group effort with everybody in the chain getting a slice of the pie.

However, instead of calling it bribe, the recipients normally use other terminologies such as gift, subscription or toll (chanda), envelope, service fee, signature money, speed money, tips (bakhshish) etc. They seem to believe that using a different terminology absolves them from any possible sin or guilt. Some claim the source of money is not all that important, but how it is spent is more important. Some say, when crores are being siphoned off, taking thousands or lakhs will not matter much.

Now once victimised, the victims tend to lose faith in traditional morality and ethics. At a later stage, they also tend to follow the same corrupt path of their erstwhile tormentors-if provided the opportunity. This has been found to be true in case of many civil servants, who during the initial stages of their services tended to be honest, but at a later stage retaliated with the same coin with which they or their kin had been victimised. A culture of rampant corruption having a demonstration-cum-bandwagon effect in society aids in their transformation for the worse.

Honesty leads to isolation and marginalisation, dishonesty leads to opportunities and material benefits. So, perceiving the apparent defeat of morality and ethics in their surroundings, the young civil servants often prefer to follow the crooked path.

The above analysis, as shown by cycle-'A' in the Figure, is relevant not only for the service-providers in Bangladesh's public sector who indulge in corruption, but also for other domains of the country's socio-economy and polity. People who accept these social realities and join the flock are the survivors. They are likely to gain materially and socio-economically in the process and thrive in a land of 'Gotterdammerung'.

Now let us dwell on those people (such as service-recipients in the public sector) who have to constantly bear the brunt of a generally corrupt and unethical socio-economic system (shown by cycle-'B' in the Figure). Theirs is a pitiable state. Vices and victimisation in the system breed fear in them as they can not defend themselves against these unjust acts. This hopelessness and the inability to resist makes them resigned to their fate; and at a later stage, this resigned state of mind may breed anger, hatred and ultimately alienation from society. If provided the opportunity, some of them may even resort to vengeance in one form or another. For them-the majority of the population in Bangladesh, the dark night of the soul never ends.