The young and the jobless 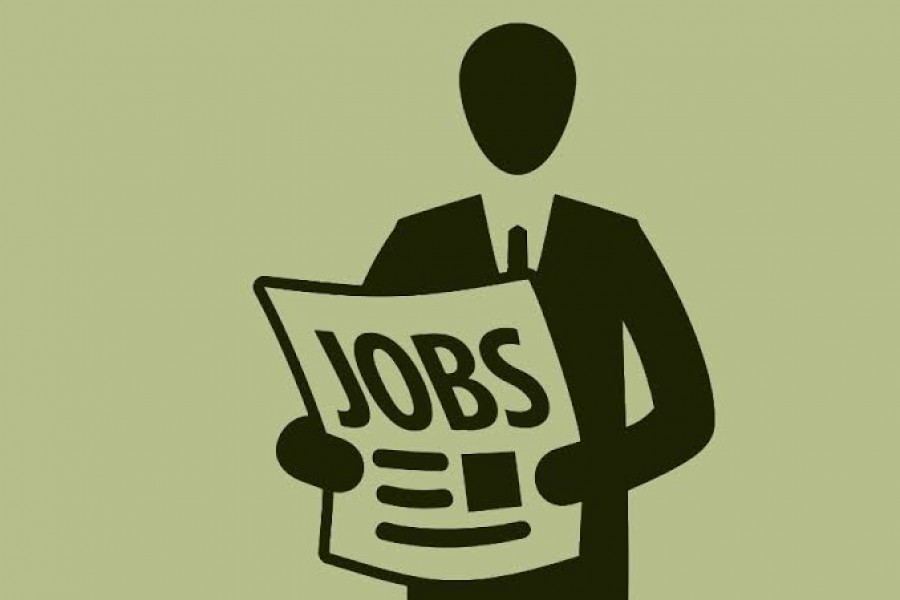 In the early 1980s, a famous TV serial titled "The Young and the Restless" used to steal our time from taking meal. It was, in short, about the lust for love and sex of the young generation, their growing restlessness and its impact on family and society. One could possibly prepare a serial called "The Young and the Jobless" as growing unemployment has been signalling social tensions all around. It has even become more imperative in a condition when high economic growth rate allegedly tends to generate less employment thus paving ways for jobless growth.

According to a very recent document of the General Economics Division (GED) of the Planning Commission (2019), two-thirds of the total population of Bangladesh belong to the working-age group. It is generally dubbed a demographic dividend visiting a society after many decades of waiting on the wings with a high dependence ratio. This demographic change is expected to turn a new leaf to the developmental progress of Bangladesh because, lest we fail to use them as fuel for furthering economic progress through generating appropriate employment , the demographic dividend could eventually  turn into a demographic disaster in terms of acute socio-economic crisis.

The document depicts that the unemployment rate in Bangladesh hovers around 3.0 per cent. Seemingly this keeps us on an even keel as the rate is very low.  It is also unsurprising in the sense that in a poor country, hardly any household member could skip works to starve. But a disaggregation of the data causes eyebrows to raise:   the highest percentage - roughly 56 per cent -of unemployed population is eventuated at the younger age between 15-24 years. Further, unemployment rate is observed to be the highest among vocational, technical etc. educated group followed by tertiary educated group and lowest among the 'no education' group. Needless to mention that the highest rate of unemployment among technical/vocational degree holders might raise questions about the relevance of the degrees with day-to-day demand in the job market.

In their submission in Research Almanac 2019, KAS Murshid, Tanvir Mahmud and Nahian Azad of the Bangladesh Institute of Development Studies (BIDS) presented  an interesting picture of the current status of educated unemployed population  in the country. More interesting, as well as innovative, was perhaps the methodology they used for carrying out the research. They sent out questionnaires, through e-mail or facebook, to 600,000 or so educated youths who obtained at least SSC degree. However, about 15,000 responded to the questions asked.

Among those educated with at least a SSC certificate, one-third reported to be unemployed; they were neither in study nor in work. In this particular context, we can possibly draw upon the GED's document, 'Study on Employment, Productivity and Social Investment in Bangladesh' which states, "while discussing unemployment and underemployment, NEET (youth not in education, employment or training) is a noteworthy indicator to identify the potential of demographic dividend. NEET represents the percentage of young people who despite not being employed, are not looking for employment and not taking part in education and training either. In 2018, 27.1 per cent of the working-age population aged 15-29 has been classified as NEET, among which the highest portion is 25-29 years old (35.2 per cent).  Second, among the educated ones,  nearly half of them reported full-time jobs and about one-fifth reported part-time jobs. Third, 55 per cent among the educated employed people are salaried. Fourth, the highest unemployment at 37 per cent prevail among honours graduates while among post-graduates the rate is 34 per cent.  Thus, on an average, about one-third of the graduates seem to be unemployed. And finally, the pitiable presence of unemployment appears to be relatively less at 27-28 per cent among those with SSC and HSC level education.

By and large, Bangladesh has a large army of unemployed population which is young and at the same time educated too. Special mention may be made of the honours graduate and post-graduate unemployed. Another looming concern seems to be unemployment among technical and vocational degree holders. Taken together, both groups seem to be the outcome of a mismatch between demand by the employers and the supply made by the educational institutions or may be that educated youths prefer white collar public sector or multinational corporation jobs that require more quality education than they possess. An alleged downturn in the production of large-scale industries along with technological uplift could explain part of the sources of unemployment among educated youths in Bangladesh. Whatever may be the reasons, unemployment among youths continues to be a major concern if we want to reap home demographic dividend. A full-blown research on the recent accelerated economic growth and apparently decelerated employment remains to be a research focus. Jobless youths will become restless to jeopardize socio-economic stability.

Abdul Bayes is a former Professor of Economics at Jaangirnagar University, and currently an adjunct Faculty, East West University. abdulbayes@yahoo.com