The tale of lost childhood

The children left behind by women migrant workers in an island village are not growing up well. They are not being educated well and taken care of in the absence of their adoring mothers. 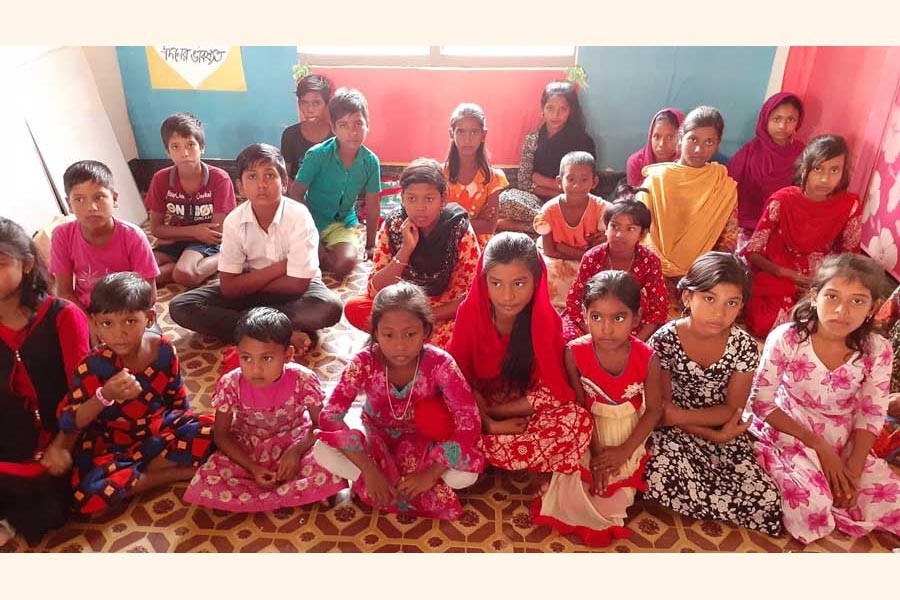 Sharmin Aktar (not real name) is living almost alone at home. She is about to forget laughing and even playing with her mates.

Sharmin, a 10 years old girl, is studying in class three at Char Shalepur Primary School. She is a daughter of a woman migrant worker. Her mother went to Jordan two years back.

Recently a man has started disturbing her. Especially when her father doesn't stay at home, the person comes and wants to touch her body.

"I am very much scared of the man as I think he can do anything with me," she said. The man is married and has children. He also takes drugs, Sharmin mentioned.

Her father does nothing for income, but also does not company with his children, she added.

Like Sharmin, children left behind by women migrant workers in Char Shalepur are facing different kinds of trouble due to lack of proper care. Many times they face exploitation, forced to take workload; cannot continue education, experience early marriage, etc.

Shalepur is a Char (island) in the Padma River. It is under Charbhadrasan Upazila in Faridpur district. Nearly 8,000 people are residing in this area. Of them, a half are women.

During a recent visit to the Char this correspondent has come to know that women from almost every house are now staying abroad.

When wives go abroad, husbands take on the responsibility for care of families and children left behind. But in most cases, they don't perform their duties properly as they like to spend time idly.

Under such circumstances, children are forced to bear excessive workload. Even they don't get proper healthcare if they fall sick. They feel loneliness in absence of parents' company. Besides, girl children are at risk of sexual abuse.

Sheikh Hasan, a 12 years old boy, is studying in class four in the same school. He said his mother desires he will be a police officer. But after completing all household chores he does not get enough time for study. He cooks food for his father and two younger brothers as well as grazes cattle almost every day.

"Sometimes I feel helpless and suffer from loneliness. I am missing my mother," he said.  She is very much caring to them, he added.

But his father likes to spend time with his friends, Hasan added.

Its community mobiliser Lizu Aktar said about 90 per cent of women from this Char have gone abroad with jobs, especially to Jordan, Lebanon and Saudi Arabia.

She said most of women go abroad to change their economic condition through human resource development. But they hardly can achieve the target due to lack of cooperation from their families.

Husbands spend time idly after sending their wives abroad. They neither pay attention to income generating activities nor take care of children.

Many others also waste time playing cards and taking drugs.

Ms Aktar said as it is an underprivileged area, problems are acute here.

Education and healthcare facilities are insufficient. Road communication is not easy with the district town. So, when parents are not caring to their children, their development is hampered severely.

When contacted, Foziron Aktar, a woman migrant working in the United Arab Emirates, said she went abroad mainly to arrange tuition fees of her son.

"When I was at home, I struggled hard as I had no money. I could not pay tuition fees," she added. But her dream was shattered as her husband stopped education of her son when he was in grade six and employed him at a tailoring shop.

"My son was a very meritorious student. I requested my husband not to stop his schooling. But he did not consider my request," she mentioned.

"Why have I been working hard for last seven years if my child fails to continue with his education?" she questioned.

Every year on an average 100,000 women get overseas jobs.  Since 1991, over 0.87 million Bangladeshi women have gone abroad for jobs, according to the Bureau of Manpower, Employment and Training data. Most of Bangladeshi women are working in Middle East as domestic helps.

A study, conducted by Save the Children in 2017 showed that children left behind by migrant workers often suffer from sadness, loneliness and isolation, which have an adverse impact on their education and social lives.

Due to lack of support and guidance during teenage years, children of migrated parents are at high risk of drug addiction, sexual and physical abuse and teenage pregnancy.

The study reveals that in the case of abandoned households, the social costs of migration were found to be high, due to family disintegration and lack of parental care.

The research recommended establishing a national database of children left behind and their migrant parents to deliver various services for well-being of the children.

It also suggested adoption of rules and regulations to address issues relevant to children left behind and incorporate them into national plans for children's rights.

"When it is a woman's migration, then problems become acute as fathers in Bangladesh's rural societies are usually not taking care of children like mothers."

To improve the situation, the government should frame a proper policy for the migration-prone areas. Support centres, and awareness programme can help the families improve communication with children, she observed.

Otherwise, remittances sent by women migrant workers will not be utilised effectively in human resources development.

OKUP chairman Shakirul Islam said a counselling programme should be introduced in every migration-prone area with special focus on underdeveloped areas for health, security and education system.

Talking to The Financial Express, Zahid Anwar, deputy director at Wage Earners' Welfare Board (WEWB), said they have been continuing with a stipend programme for meritorious children of migrant workers.

The government also introduced a quota for the HSC level children of migrant workers. But they have no programme for the children in under- developed areas.

"Migrant workers also can lodge complaints through the 'probashbondhu call centre if they or their families face any kind of problems," he said. They will also increase the facilities of migrant workers gradually.