The sustaining power of rains 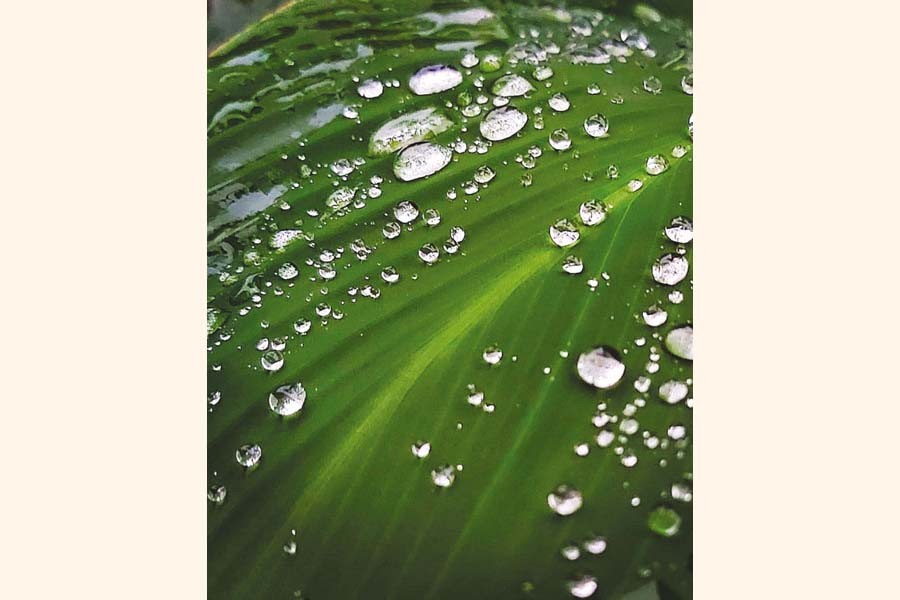 This melodious romantic song sung by Hemanta Mukherjee has captured the ecstasy of arrival of the beloved after a long wait. But then the most cherished presence has been equated with rain ---indeed an apt comparison.
Why rain, not anything else? What the absence of rains means to the living world is acutely experienced by flora and fauna, people in particular. In Rajasthan, special prayers for rains are arranged and women of a certain community disrobe themselves to hold group dance. They believe the dance will bring down rains. Even in Bangladesh hot spells and no rains at times cause unmitigated suffering and loss of crops, fruits and vegetation. Rajshahi under the influence of aridity often suffers more than the rest of the country. There are rhymes to welcome rains like, 'Ai bristi jhepe, dhan debo mepe'.
This year also not only Rajshahi but the entire country had a close shave before the Kalbaishakhi (seasonal storm) arrived on Wednesday last with moderate to heavy showers. After unremitting drought and heat waves, rains accompanied with the season's first Kalbaishakhi arrived as a blessing from the heaven. It was delightfully refreshing not only for human beings but also for every form of life.
What is particularly rejoicing is that the rain reinvigorated the floral world, mango and litchi fruits in particular. These luscious summer fruits do not grow to their usual sizes in want of rains. Some fruits in their prime got dried and dropped off. Had the rains arrived earlier, those immature mangoes did not perish. Yet the first rains of the season will save the fruits from further losses.
Another spell of rains that followed the Kalbaishakhi on Friday is likely to help the cause further. A Baishakh without rains is a disaster for this tropical country with its most famous gifts of Nature ---the fruits. But if the Kalbaishakhi starts visiting frequently, it also makes things worse for both crops and fruits. But rains without the storm are most welcome as long as they do not damage the standing boro paddy in the field, the harvesting time of which is fast nearing.
Let it be cherished that this Baishakh is not going to be another rainless month. The air became cooler with the Wednesday's rains and the Friday's spell made it even more pleasant. Climate change has upset many of the natural orders and Bangladesh's seasonal cycle cannot be expected to remain immune to the process. The two days' gifts are simply priceless.
Small wonder that rainy season has shortened and continuous rains for days are becoming a rare event. Do children get holiday for rainy days? Perhaps not. But decades ago, such holidays presented little learners with the extra joy and thrill of enjoying rains. That Rabindranath had nourished especial fondness for the rainy season is clear from his poems and songs.
Yes, rains are a symbol of life. It has been used as such in novels and short stories. In the concluding part of A Farewell to Arms, Hemingway's use of rain is significant. When the hero leaves the hospital where his beloved gives birth to a stillborn baby and also dies a little while later, he is left a lonely, dissolute and devastated man. Earlier he bade farewell to arms with which war is fought or by extension the Great War itself. Now he bids farewell to the loving arms of his beloved. The hero Henry walks out of the hospital in the rain to return to his hotel.
No, there is no triumph of life and yet disillusionment of war and loss of love are not the end of everything. Life is somehow sustained by rain. The crudity and harsh reality of life have been painted with lifelike and brusque touches where rain provides the only relief.