The pandemic must not lead to increased poverty 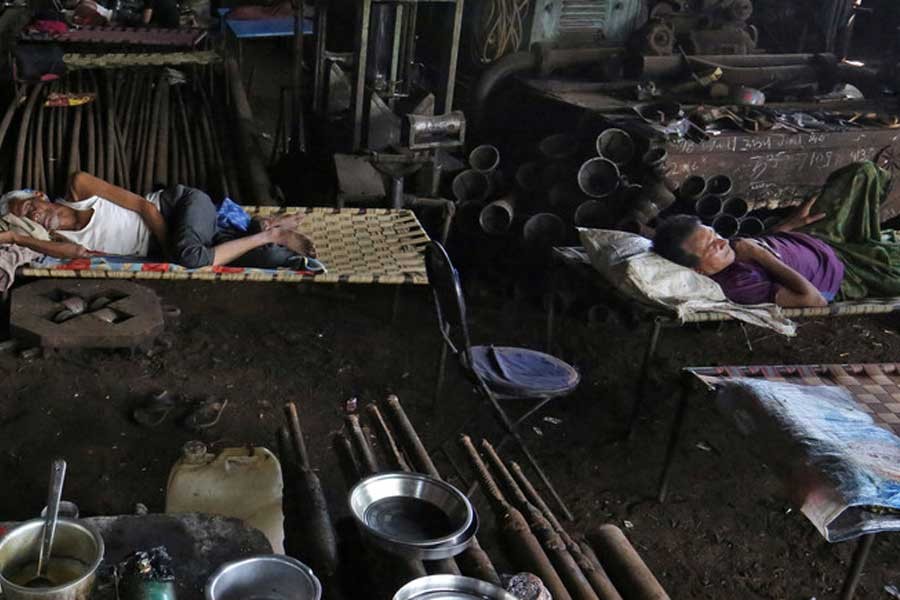 The Covid-19 pandemic now has spread across the globe affecting almost every country. Lockdowns are being recommended and enforced in many instances to contain the coronavirus. But health experts are warning that  such a measure is  unlikely to be achieved the objective in crowded cities which also host slums. These cities could see very rapid spread of the virus. The virus will take many lives, disrupt communities, even shatter institutions leaving behind national economies devasted. This in turn will also have a devastating effect on the global economy.

There is now a growing degree of anxiety that goes far beyond the health scare. These concerns are serious and real involving the livelihood of a very large proportion of people on this planet. As fear and uncertainty grip the rich, the welfare of the poor and vulnerable fall by the wayside.

The recent public advisories by governments and health agencies strongly recommend that people should stay home and stockpile food in response to the coronavirus outbreak. Also, people are advised to wash their hand with soap and water or hand sanitisers and maintain "social distance''. While these advisories are very well intentioned, but fail to take into account the most vulnerable groups of people in society. In fact, the recommended basic hygienic measures like hand washing with soap and hand sanitisers are not available in slums. Also, for homeless people the advisory to "stay at home'' is of little relevance.

Government advisories to date are of very limited use to the poor people without adequate safety nets. People working in the informal sector predominate the working population in countries like Bangladesh and India. They do not have the luxury of staying home without paid sick leave. People living below the poverty line lack disposable cash to enable them store up food and necessities of life in an emergency situation like the outbreak of an epidemic or a pandemic. Hunger and malnutrition contribute to ill health and the lack of hygienic living condition further aggravate their health condition leading to increased vulnerability  to diseases.

More importantly government advisories like social distancing, self-isolation and stocking up food have little practical relevance to the poor both in urban and rural areas in a country like Bangladesh. These advisories are highly urban upper and middle income group-centric. 24.4 per cent of population in Bangladesh live below the poverty line and 10.4 per cent of employed population live below US$1.90 a day.

According to the World Bank Report 'Poverty and Shared Prosperity 2018', Bangladesh ranked 5th for extreme poverty while India topped the list. The rich-poor divide in both the countries is continuing to widen and also witnessing rapidly growing  number of very wealthy people. This is the darker side of the economic success of both the countries.

Also, for the dire need for survival many must go out to earn some income in urban areas or do their daily chores in rural areas such as to graze the animals or tend to the field regardless of their health condition or weather. They simply can not work from home. In Dhaka close to 40 per cent people live in overcrowded slums and many live in public spaces lacking the most basic shelter. They do not have space for keeping 1-meter distance when a whole family huddle together in a one-room hut. For the poor the current crisis has further compounded their health condition as many of them already grapple with other ongoing health conditions.

The deplorable health care system in these countries at a time of the pandemic and the reliance on it for the virus testing  evokes further despair.  The poor can only access the health care if they are able to pay for it or can reach a health care facility.  To address the  crisis, governments in developing countries must deploy their resources and capabilities with innovative health care practices to reach out to all in need of health care regardless of their socio-economic status based on their need not on their ability to pay.

Many hundreds and thousands of migrant workers, having lost their jobs and bereft of savings are trekking back to their native villages clutching their children and meagre belonging from urban centres like Dhaka and Chattogram. Furthermore, Bangladeshi migrant workers are also returning from countries like Italy, Spain and other European countries and straight heading back to their native villages. These twin flows of migration to villages will severely put the very meagre health care system in rural areas under severe stress. Also bereft of any income flows and savings, these returnees will further put village communities under severe financial stress.

In India a 21-day lockdown has been declared, asking 1.37 billion people to stay at  home without telling them how to access food and water, especially  the rural poor and urban slum-dwellers, and how they would pay for them at a time when they could not work to earn a living. The lockdown has brought the nation's economy and supply to a  standstill, leaving certain areas short of medicine and other necessities. Like in Bangladesh, millions of migrant workers in India have undertaken a journey on foot to their native villages because all modes public transports are shut down. Some observers opined that  this was the biggest human migration on foot after the 1947 partition of the sub-continent.

There is a growing fear that the Covid-19 pandemic is likely to accelerate the process of income inequality further. Over the last 20 years people living below the poverty line in the United Kingdom (UK) increased by 3.0 percentage point to 13 per cent and more than half of people in poverty are working poor. In the US the vast majority of working people earn less than living wages and are mostly concentrated in the services sector. Now those who still remain healthy, they are also likely to lose that income as a result of the quarantines and lockdowns.

Even in normal times, 40 per cent of wage earners in the US could not afford a US$400.00 in emergency according to a research finding of the Federal Reserve. According to the housing charity Shelter, 37 per cent of working families in the UK could not cover their housing costs for more than a month in the event of job loss. The UK government statistics also indicated that 16.5 million working age population in the country did not have savings. Many working poor now also face frightful prospect of not being able to pull through the crisis.

The first-ever extraordinary virtual G20 meeting was held on March 26 to develop collective global responses to the Covid-19 pandemic.

There was a general expectation that the summit would come up with coordinated concrete policy measures similar to what it did in the wake of 200-7-08 Global financial crisis (GFC). The three-page statement issued at the conclusion of the Summit was long on aspiration but very short on concrete measures to combat the spread of the virus.

While health and public safety remain of paramount interest in this time of the global pandemic, people must not face the prospect of not being able to pull through this heath crisis financially. Countries with functioning social welfare system may be able to extend income support to take account of the threat like in most European countries. But it is also the time for countries where such systems do not exist to initiate to develop them to offer protection to the most vulnerable people in society.

Only a centralised state response in countries with well-functioning democracy with firmly built democratic institutions  is capable of responding to the crisis, not the market-based response. Such a centralised response will save us from the far-right model of a centralised state response that has now been put in place by Viktor Orban in  Hungary  using the pretext to fight the pandemic to consolidate his authoritarian rule.  In the Philippines, President Rodrigo Duterte is also using the pandemic as a pretext to further consolidate his authoritarian rule and  ordered the security forces to "shoot them dead'' if any protest against his government takes place after police used force to disperse a protest by poor people in Metro Manila..

Also, authoritarian leaders in seemingly otherwise functioning democracies like   Donald Trump in the US and  Jair Bolsonaro in Brazil ( many call the political system in  these two  countries as plutocracy rather than democracy), initially portrayed the virus of insignificant consequence, then moved on to downplay the pandemic and finally when they could not hide the mounting number of infections and deaths, they accused others for their derelict response.Occurrences such as the Covid-19 pandemic is particularly troublesome for authoritarian leaders because they bring bad news and pose a challenge to their authority by nature, if not men,  and both tarnish their image as the "leader''.

The pandemic has struck with stunning ferocity creating an extraordinary systemic challenge at this point of time in human history. That means this is the time to develop alternatives to existing policies to make impossible to become politically possible. Also, in this critical moment of history, ideas seemingly look impossible also look possible.

This is the time for policy makers to start with a basic universal income (UBI) as a simple social policy which will ensure providing modest but regular and unconditional cash payments to all.

This is the only way to ensure that everybody has enough money to get through this crisis. But such an income support policy is not to be confined to deal with the economic fallouts arising from the current pandemic but should be an integral part of ongoing social protection policies.

Muhammad Mahmood is an independent