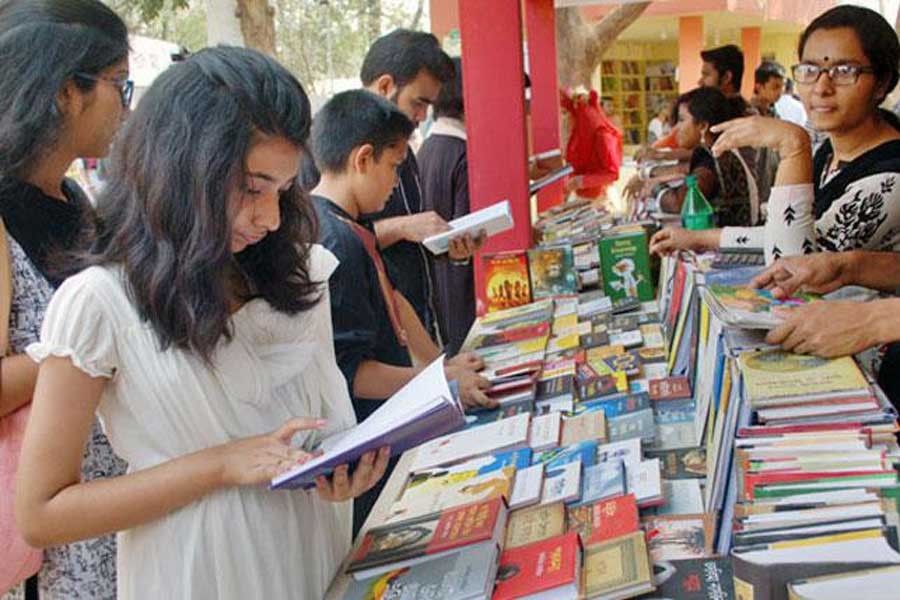 Amor Ekushay Boimela, the grand book-fair in memory of the heroes of the language movement, has not only turned into a display venue, but also has become a place for the book lovers to meet and interact. After a tiny beginning in seventies, the Ekushey Boimela has not only put on magnificence over the time, but also has flourished. In course of time it has become a festive evet for the readers and writers, for which they wait round the year and publishers as well. In Humayun (Ahmed) era, the publication industry got a momentum that continued for decades afterwards. While bringing in a radical change in developing readership in the society, it also added dimensions to the publication industry. Thereafter, the entire publication business tried to cope up with the changed choice of readers and catch-up the tune of the readers in their production. A number of fresh writers have been introduced during post-Humayun era responding to the changing pattern of the readers' choice. Though many of them disappeared soon, a good number still have been able to continue.

At this age, the tech-savvy generation steps nowhere without checking it out online. Thus, businesses took the benefit of the platform to draw attention of their target population. Therefore, why not the publication industry? A sharp transformation has also been encountered in the patterns of developing readership and creating writers during the facebook age more significantly. Facebook became the centre to draw attention of the readers. Even a decade back, Ekushey Boimela based publication business was totally writer-centric. The name and fame of writers helped sell a book like hot cakes irrespective of its content. However, readers' choice has shifted from writer to content more. In a changed reading atmosphere, readers have become more particular in selecting books. Today contents remain the top priority of the readers, and many a book carrying the differently conceived content remains in focus irrespective of the writer's age, popularity or the number of books. Marketing techniques of different types are also being adopted in the publication industry to communicate with the readers in a meaningful way.

While studying, the publishers and writers move to communicate with the readers through different media, specially online and social media platforms, the concept of reaching out to people has been found very much aligned with the theory of Marketing 4.0 introduced by marketing guru Philip Kotler. Along with co-authors Hermawan Kartajaya and Iwan Setiwan, Philip Kotler in his book 'Marketing 4.0: Moving from Tradition to Digital' (Wiley, NJ. 2017) has described the deepening and broadening of human-centric marketing to cover every aspect of the customer's journey.

According to Kotler, "Power shifts to connected customer". Random conversations about brands are now more credible than targeted advertising campaigns. Social circles have become the main course of influence, overtaking external marketing communications and ever personal preference. Customers tend to follow the lead of their peers when deciding which brand to choose. They seek advice and reviews, both online and offline.

If we align this theory with the current scenario of book industry specially on the eve of Ekushay Boimela, it is evident that now a days the readers are intended to be connected to each other on social media platforms. Immediately after purchasing a book and completing reading, they post a review on the book and share the same with peers to let them know the reactions. The young generation, to some extent, is very much blunt in expressing impression on a book after reading.

Philip Kotler then focused on "The Paradoxes of Marketing to Connected Customers". The changing landscape creates a set of paradoxes for marketers to deal with, one of which is online versus offline interaction. Even as connectivity empowers customers with abundant information, customers have also become overly dependent on others' opinions, which often outweighs personal preferences.

Since recent years, the book marketers are being found interacting with the readers both online and offline. The publishers are found intended to stimulate readers to visit book fair through creating different attractions, like autograph from and photograph with the writer. In ages, it was believed that a book was not to be unveiled to its reader to keep the climax afresh. Whereas, a more details of a book are being described to the potential readers (purchasers) to get them be informed and feel interested towards the content.

The Influential Digital Subculture is the another area that Philip Kotler focused on in his Marketing 4.0 where he has denoted YWN i.e., Youth, Women and Netizen. Youth, women and netizens have long been researched thoroughly by businesses but typically as separate customer segments. Their collective strength, especially as the most influential segments in the digital era, has not quite been explored. Youth and early adopters of new products and technologies, they are also trend setters and game changers. Women are defacto household managers, purchase managers and asset managers all rolled into one. Finally, netizens are social connectors, as they overwhelmly connect, converse and communicate with their peers. Together, youth, women, and netizens hold the key to marketing in the digital economy.

Therefore, YWN has been in the centre of the focus of publication industry in recent years. Now a days, publishers are very much interested to publish debut books of young and even amateur writers. They are well aware of the fact that the youths are the trend setters and change makers. Though there are no dependable data, still it is evident that books are being published in bulk written by women, many of whom have emerged from online platforms. The industry is intended to patronise the women writers while it will also impact marketing. Netizens, according to Kotler, are social connectors. The content on the internet is created and shared by the people and for the people. They talk to one another and information flows as they converse. The publication industry in Bangladesh in recent years has very successfully scooped this group of people. Immediately upon buying a book, the youth and netizens tend to have a photo or selfie with the writer and post it on their own profile. This flows among the cyber generation at the mbps speed and magnify to rush to have a same type of photo or selfie with a celebrity writer. So, in fact the celebrity writer and fellow reader both are the product of the system that is being prevailed in the industry, either intentionally or not, as described by Philip Kotler in his book 'Marketing 4.0: Moving from Traditional to Digital'. Catching up with this, you will find notifications about which writer will be available on what time at Boi Mela at which stall.

In the digital economy, Marketing 4.0 is an approach that combines online and offline interaction. Traditionally, the market was divided into homogenous groups based on their geographic, demographic, psychographic, and behavioral profiles. Kotler has redefined it as Five-A covering Aware, Appeal, Ask, Act, Advocate. In the context of publication industry, social media platforms are being widely used to make people 'aware' of the specific book and its writer. Readers become attracted and shortlist the specific books due to its 'appeal'. Audiovisual media is being widely used in this phase to address the readers, especially with Emotional Intelligence and Empathy to lead them think associated with the story.

Prompted by the 'aware' and 'appeal' people nowadays follow-up and actively research for more information from friends, family and from media. If you follow the social media trend and newsfeed of people, many will be found asking "Visiting Boi Mela Today, Friends suggest some good books" or "What's your feedback about the XYZ book". If they are convinced by further information, they decide i.e., 'act' to buy the book and immediately upon completing reading post feedback on wall which may cover from negative to positive advocacy. Many a publishing house has formed facebook groups where different types of competitions are arranged there on book review, writing, photography to attract the right group of target population.

Kotler also focused on Tactical Marketing Application in the Digital Economy and described the Human-Centric Marketing for Brand Attraction. Imagine a world where artificial intelligence and robotics are integrated into people's daily lives. This has already began in the publication industry of Bangladesh. Once I purchased a book based on the Partition of 1947 from an online store and a few days later I received a call from the store telling that a new book of the same topic was published and whether I was interested to purchase it as well.

Lastly, we would like to relate the theory of Content Marketing for Brand Curiosity with today's publication industry. According to Kotler, content marketing is a marketing approach that involves creating, distributing and amplifying contents that is interesting, relevant, and useful to a clearly defined audience group in order to create conversations about the content. This is very much prevalent on the social media-based marketing platform. In fact, the boosted up culture of posting book review is in fact a content marketing. Considering the awareness, appeal and advocacy, marketers have understood it well that no reader can be attracted without providing them with an idea of the inside. The #Hashtag culture is also another perfect example of this. Still, to create curiosity, not depending on content marketing only, publishers (or writers) are found to be serious to create curiosity through giving stunning titles of the books.

The writer is a banker in profession and can be reached through:
ashadullatif1979@gmail.com