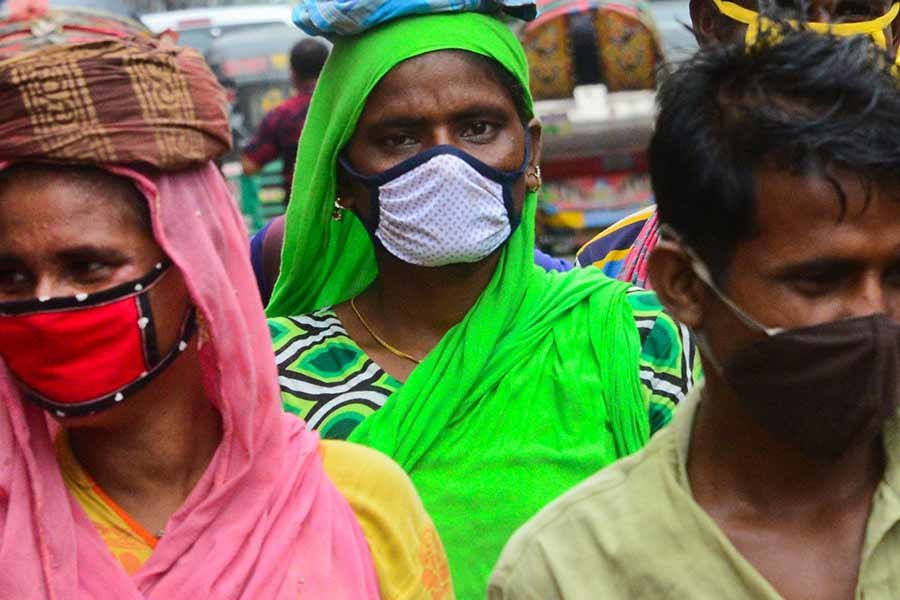 The Covid-19 pandemic threatens to roll back gains in women's economic opportunities, widening gender gaps that persist despite 30 years of progress.

Well-designed policies to foster recovery can mitigate the negative effects of the crisis on women and prevent further setbacks for gender equality. What is good for women is ultimately good for addressing income inequality, economic growth, and resilience.

Why has Covid-19 had disproportionate effects on women and their economic status? There are several reasons.

First, women are more likely than men to work in social sectors - such as services industries, retail, tourism, and hospitality - that require face-to-face interactions. These sectors are hit hardest by social distancing and mitigation measures. In the United States, unemployment among women was two percentage points higher than men between April-June 2020.

Because of the nature of their jobs, teleworking is not an option for many women. In the United States, about 54 percent of women working in social sectors cannot telework. In Brazil, it is 67 percent. In low-income countries, at most only about 12 percent of the population is able to work remotely.

Second, women are more likely than men to be employed in the informal sector in low-income countries. Informal employment - often compensated in cash with no official oversight - leaves women with lower pay, no protection of labor laws, and no benefits such as pensions or health insurance.

The livelihoods of informal workers have been greatly affected by the Covid-19 crisis. In Colombia, women's poverty has increased by 3.3 percent because of the shutdown in economic activities. The UN estimates that the pandemic will increase the number of people living in poverty in Latin America and the Caribbean by 15.9 million, bringing the total number of people living in poverty to 214 million, many of them women and girls.

Third, women tend to do more unpaid household work than men, about 2.7 hours per day more to be exact. They bear the brunt of family care responsibilities resulting from shutdown measures such as school closures and precautions for vulnerable elderly parents. After shutdown measures have been lifted, women are slower to return to full employment. In Canada, the May job report shows that women's employment increased by 1.1 percent compared with 2.4 percent for men, as childcare issues persist. Furthermore, among parents with at least one child under the age of six, men were roughly three times more likely to have returned to work than women.

Fourth, pandemics put women at greater risk of losing human capital. In many developing countries, young girls are forced to drop out of school and work to supplement household income. According to the Malala Fund report, the share of girls not attending school nearly tripled in Liberia after the Ebola crisis, and girls were 25 percent less likely than boys to re-enrol in Guinea. In India, since the Covid-19 lockdown went into effect, leading matrimony websites have reported 30 percent surges in new registrations as families arrange marriages to secure their daughters' futures. Without education, these girls suffer a permanent loss of human capital, sacrificing productivity growth and perpetuating the cycle of poverty among women.

It is crucial that policymakers adopt measures to limit the scarring effects of the pandemic on women. This could entail a focus on extending income support to the vulnerable, preserving employment linkages, providing incentives to balance work and family care responsibilities, improving access to health care and family planning, and expanding support for small businesses and the self-employed. Elimination of legal barriers against women's economic empowerment is also a priority. Some countries have moved quickly to adopt some of these policies.

• Austria, Italy, Portugal, and Slovenia have introduced a statutory right to (partially) paid leave for parents with children below a certain age, and France has expanded sick leave to parents impacted by school closures if no alternative care or work arrangements can be found.

• Latin American women leaders have established the "Coalition of Action for the Economic Empowerment of Women" as part of a wider whole-of-government effort to increase women's participation in the post-pandemic economic recovery.

• In Togo, 65 percent of participants in a new mobile cash-transfer program are women. The program enables informal workers to receive grants of 30 percent of minimum wage.

Over the longer term, policies can be designed to tackle gender inequality by creating conditions and incentives for women to work. As discussed in a recent blog, particularly effective are gender-responsive fiscal policies, such as investing in education and infrastructure, subsidising childcare, and offering parental leave. These policies are not only crucial to lift constraints on women's economic empowerment, they are necessary to promote an inclusive post-Covid-19 recovery.

KristalinaGeorgieva is Managing Director of the International Monetary Fund (IMF). StefaniaFabrizio is Deputy Unit Chief in the IMF's Strategy, Policy, and Review Department. Cheng HoonLim  is an Assistant Director in the Western Hemisphere Department of the IMF.

Marina M. Tavares is an economist in the Research Department of the IMF.

This article first appeared in IMF blog and drew from a body of work undertaken by the IMF available at the Gender and IMF page on www.imf.org.