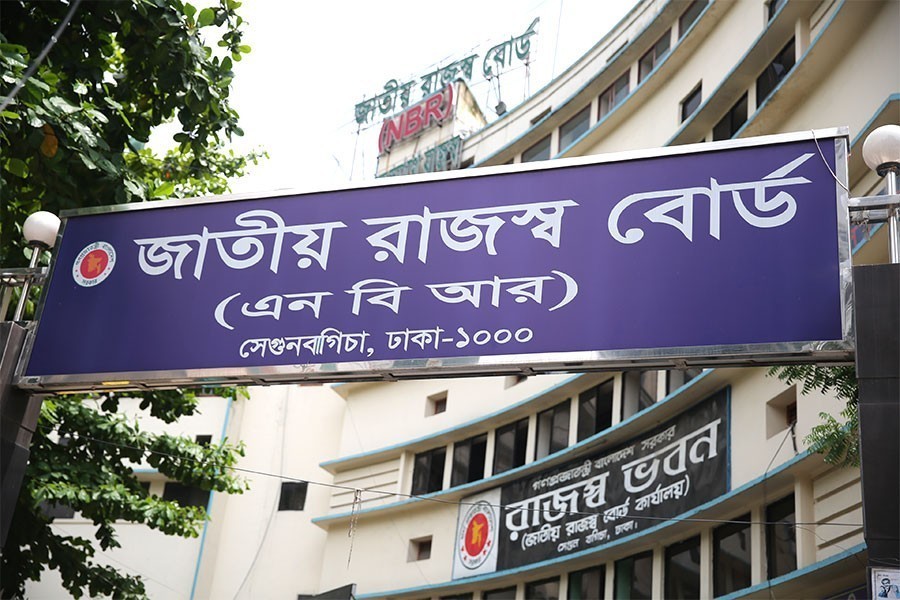 The National Board of Revenue (NBR) has proposed a Tk. 3.25 trillion tax collection target for the next financial year (FY), which represents a 44 per cent increase over the revised target for the current FY. Surprise, surprise!

The NBR does the same thing ahead of every fiscal year. It sets a tax revenue target that invariably evokes scepticism from various circles, including economists.

However, such scepticism is proved to be genuine as the revenue board is forced to revise downward its tax revenue target in the third quarter of almost every FY. That revised targets again, in most cases, remain unmet.

There is no denying that government's tax revenue earnings have been growing in recent years without any pause, but those are failing to reach the targets set at the beginning of every FY.

Truth is the tax targets that the NBR sets are found unrealistic, mainly because of the lack of capacity of the taxmen. The potential of tax revenue earning is far greater than what the NBR sets from time to time.

The collection of tax is far short of the potential, mainly because of strong propensity among the eligible taxpayers to evade tax payment and corruption and indifference on the part of taxmen.

In a country of nearly 170 million people, only 2.0 million people do submit tax returns annually. Then again a good number of them do not have taxable income.

However, the propensity to evade tax payment is nothing unique in the case of Bangladesh. Even in developed countries, people tend to evade tax. What is however important is that tax evaders in those countries face harsher penalties in the event of detection. So, the incidence of tax evasion in the developed countries is very insignificant. Moreover, taxpayers usually do not face any hassle while paying their tax. Taxmen are friendly, in most cases, and taxpayers pay their taxes digitally.

Tax evasion is rampant in Bangladesh not only in the case of individual tax payment. It is equally true in the case of payment of value added tax (VAT) and import duty. Lack of manpower and logistics support in the tax offices is one of the major reasons for tax evasion or tax avoidance, whatever one may prefer to call it. Corruption and lack of seriousness on the part of tax officials are also listed as major factors undermining the government's tax revenue collection efforts.

In such a situation, one cannot expect the country's tax-GDP ratio to move up notably---the current ratio is below 12 per cent--- without putting in place the much-discussed reforms.

The potential to hike the tax-GDP ratio to 20 to 25 per cent is there. Once reforms are in place, there would be significant increase in the mobilisation of income tax, VAT and import duty. What is necessary is plugging the holes in tax collection.

The collection of withholding tax is a case in point. According to a report published in this paper Sunday last, the income tax wing of the NBR has recently detected evasion of Tk.13.5 billion in withholding tax. Withholding tax is the tax that a number of agencies, including banks and financial institutions, deduct at source against procurement and services.

Taxmen see this particular tax collection mechanism as a very potential one as far as boosting of the tax revenue earning is concerned. But it could not be tapped effectively for shortage of manpower and logistics.

There are about 200,000 withholding agencies that are supposed to deduct tax at source and deposit the same with the government exchequer within a specified period. Allegations have it that some agencies do collect the tax but do not deposit the same with the government exchequer or make long delays in making deposits. Many other agencies that are required by law to collect tax at source are not aware of their responsibility. The relevant wing reportedly does neither have necessary manpower nor logistics to carry out their job efficiently.

In such a situation, one high tax official has estimated that withholding tax source alone, if tapped properly, could fetch revenue worth Tk. 2.0 trillion a year.

Similarly, if loopholes in areas of VAT, import duty and individual and corporate tax could be plugged, to a notable extent, the targets that NBR sets annually would not have appeared ambitious.

However, it is important for both taxpayers and taxmen to behave responsibly to help the government raise the volume of tax collection in all areas. But neither of the two groups would cooperate unless they are compelled to do so through the implementation of some major reforms, including full automation of tax administration.

Naturally, taxmen should be the prime targets of any reform. The state of tax administration has improved in recent years but the improvement is far short of the requirement.

There has to be 'qualitative change' in tax administration, said Dr. Ahsan H Mansur, executive director of the Policy Research Institute (PRI), while talking to the FE last week. It is high time the government took the right kind of measures to ensure that kind of change.