Tale of a child labourer 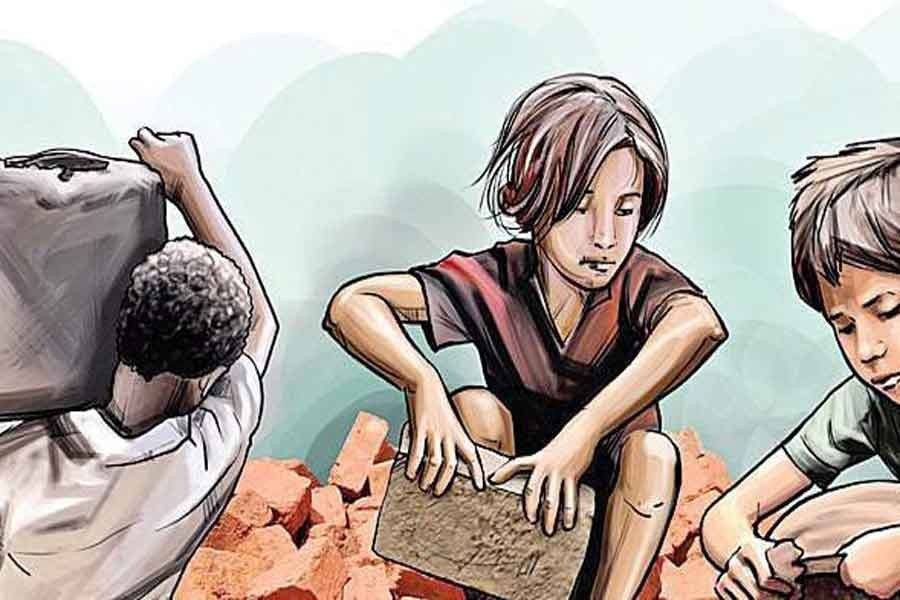 Child labour is very common and widespread in Bangladesh. A child of around 10 years of age of an affluent family of the country normally gets off the bed, brush teeth, take breakfast and gets ready for school. But Ridoy Ahmed's story is different. He has to jump off the bed and rush for work, just when the twilight begins at the dawn. His life is not so smooth and comfortable, rather harder than others of his age in affluent families.

Ten years old Ridoy does not get the opportunity to brush teeth, take breakfast or wear school uniform. His mother awakes him from sleep and drives him out of the room just after hearing the Fazar Prayer call on the loud speaker from the nearby mosque. On barefoot he starts running fast to the nearby fish market where Ridoy works as an assistant of day-labourers. The wholesale fish market is located at Launchghat under Mirkadim municipality area of Munshiganj.

Ridoy has no time to waste as the market starts from early in the morning. He at a morning said, "If I'm late for few minutes, they (owners of a fish trading shop) don't take me in work". He usually carries icebergs that are used for preserving fishes, water, and washes fishes and helps senior day-labourers in cutting fishes in to pieces. Ridoy was talking in different gaps between his work that "My earning depends on how much work I can do. Usually, I earn Taka 80 to 100 daily". It is surprising to observe as to how hardship Ridoy faces during his work in the fish market. He represents innumerable working boys of his age group and class in Bangladesh.

Ridoy was seen sometimes carrying large pieces of ice on his head; sometimes he was carrying large buckets in two hands to wash fishes; sometimes he was carrying a sharp knife to cut fishes. He was seen continually running from one corner to another of the market. The small and fragile body of Ridoy became tired and exhausted with the time approaching. He was getting thirsty and hungry and his movement was seen slowing down. But the fish trader, who employs Ridoy, was not happy with the performance of such huge tasks; rather the trader was seen asking Ridoy to move faster and work quickly.

The trading was about to end and crowd was becoming lesser at around 9:00 am. Now Ridoy is fortunate to have few moments to rest. At that time he sat on a bench in the fish market and said, "Today, I have earned Tk 100. It's not fixed for everyday. If I do less work, they (trader) pay me less. I will take breakfast now by some of the money from here and I will give the rest of the earning to my mother". Ridoy's mother is a street beggar while his father collects waste from dustbins. He has one sister, who is married off, and another younger brother. Ridoy, who did not get himself enrolled at any school, said "We live in a nearby slum".

He cannot read or write as he never went to school; and does not even know alphabets and words. Ridoy explained, "Nobody has ever taught me these; so, how can I learn the alphabets and words". However, he added, "I dream of going to school to study, to school, college and more. But there is no source from where I can get money to study. If I don't work, what I will eat," a tearful Ridoy pondered. Talking about child labour, a trader at the market said they don't want to employ children in work. But children themselves of Ridoy's age and class and their parents insist that traders employ them, even in low wages. He claims traders employ children in work on the humanitarian ground. The mayor of Mirkadim municipality almost echoed him. But he said the municipal authority is taking initiatives for education of street and working children.

But social norms and economic realities mean that child labour is widely accepted and very common in Bangladesh. They are engaged in different types of work ranging from risky work like helpers in the transport sector to ship breaking. Child labour is often highly valued here as many families rely on the income earned by their children for survival. Moreover, as child labour is cheaper and child labourers are considered to be more compliant and obedient than adults, the employers often prefer to employ children. As per the UNICEF statistics, at the time, there are some 3.2 million child labourers like Ridoy working hard for livelihood in different sectors of the economy in Bangladesh.

The writer is a retired Professor of Economics, BCS General Education Cadre.
sarwarmdskhaled@gmail.com