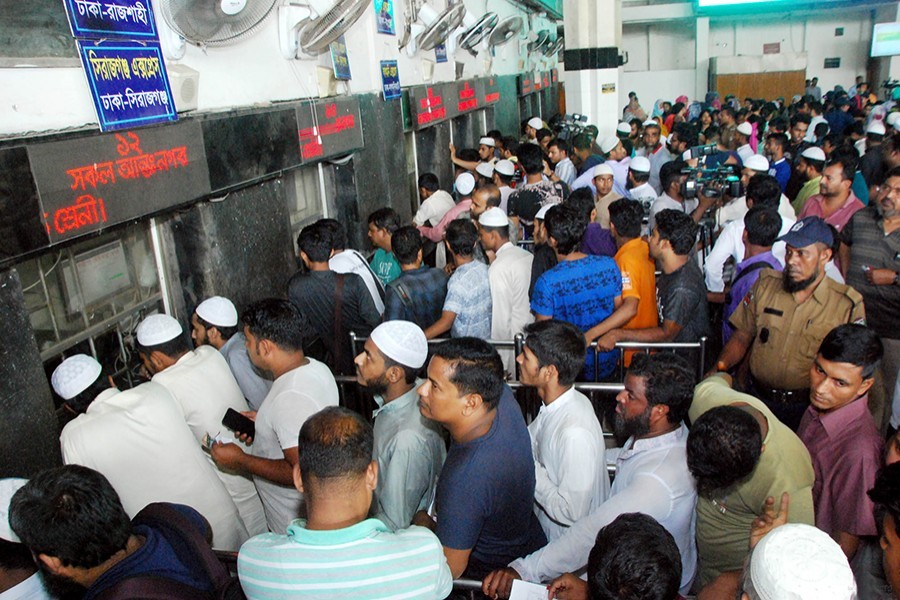 Some of the inter-city trains from Dhaka to different big cities and the other way round are mostly run in a jam-packed condition especially in the first and last week days.  A good number of commuters purchase standing tickets for different destinations, far shorter than the full trip, from Dhaka. Similarly passengers from these stations also do the same to get on Dhaka-bound trains. They find it advantageous to stand for two to three hours instead of sitting in buses for hours together in long tailbacks.

Heavy demand from passengers compels the railway authorities issue standing tickets.  It provides some relief for commuters. At the same time, it causes unease and even problems for sitting passengers especially in the middle stations. Take the example of intercity trains passing through Tangail. Some 11 inter-city express trains halt at Tangail after touching three other stations at Dhaka Airport, Joydevpur and Mirzapur. Passengers travelling from Dhaka to Tangail take the opportunity to get on board these trains. There are some seats reserved for Tangail in each train. But a large number of commuters have to purchase standing tickets due to limited seats. So there are heavy crowds in the non-AC (Air-Conditioned) compartments in the weekdays.  There is no standing ticket for AC compartments.

While passengers having seat tickets can board from Dhaka and avail their seats, sometime it becomes difficult for passengers who get on from Air Port and Joydevpur stations. A large number of standing passengers bound for Mirzapur or Tangail crowd the doors and sometimes compel women and children to miss the train. They may have bought tickets for longer destinations like Rajshahi or Khulna.  Getting off from train in Tangail becomes very troublesome as heavy rush of standing passengers travelling to next stations like Bangabandhu Bridge East or Ullahpara allows hardly any room to slip out.

Even more difficult it is to get into a train at Tangail station. Except AC compartments, passengers have to struggle hard to get in a Dhaka-bound train. Both seating and standing ticket holders have to face the same difficulty in most of the time.  Some even miss trains. Crowd of standing passengers, boarding from previous stations, is the only reason. The railway staff and attendants usually don't assist passengers to overcome the difficulty. Though there is a commuter and two local trains connecting Dhaka with Tangail, these fail to provide optimal service due to inadequate coaches.

The most hazardous thing is when two trains halt at Tangail station. Only one train can stop at platform while another has to stop at outer signal or on second line where no platform exists. Due to broad-gauge line, compartment of these trains are wider and higher. Ascending to or descending from trains become very risky without any mobile stair or ladders.

It is clear that the railway authorities did not examine the pros and cons of standing tickets. So, it is time to do so by taking the passengers' sufferings into consideration seriously. Immediate steps are required to add more compartments in these trains with facilities for standing passengers. At the same time, limiting standing passengers in regular seating compartments is also necessary.