Spike in prices of pungent tuber 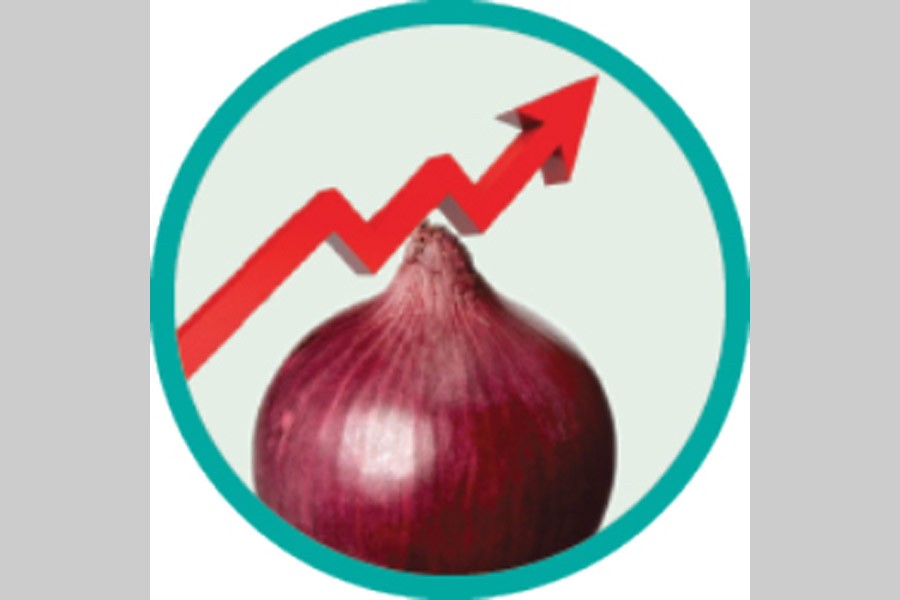 The onion prices have gone through the roof. The pungent tuber has become 40 per cent costlier in past seven days and nearly 70 per cent over a period of one month.

The consumers are hard hit as the consumption level of onion either as spice or as vegetable has increased notably in recent years. This, possibly, has much to do with the rising income of the people.

The soaring prices of onion, however, again brought to the fore the weaknesses on the part of relevant government agencies that are responsible for market monitoring and doing the needful to keep prices of essentials within the reach of the most consumers.

When onion price at the retail level increased by Tk 15 a kg about a month back, a onion seller at a city market had told this scribe that onion price might go up to Tk100 this season. When asked about the reason/s, the small trader said he had heard the wholesalers at Karwan Bazaar discussing the damage caused to onion and other crops by floods in some Indian states and its possible impact on the import price of the item.

When  wholesalers and small traders could smell possible hike in the prices of onion, the government agencies concerned were napping, which they do most of the times.

In fact, they were clueless about the sudden rise---from Tk 30 to Tk 45 a kilogram--- in the prices of the kitchen item. Nor did they bother to look into the possible impact of floods on import price of onion from neighbouring India and explore alternative sources of import.

The domestic price levels of essential items imported in bulk from India have always been sensitive to any increase in the market of the latter. It is, thus, necessary for the traders and the relevant agencies here to keep watch on the production situation as well as prices of the items imported from India. This is also true for imports from other countries. The private traders do follow international price trend of the commodities, but the government agencies concerned are not that much updated.

Had the Ministry of Commerce (MoC) and relevant other government agencies followed the developments in the Indian market and taken measures to import onion from other sources, the prices of the item would not have gone so high.

However, the failure to take timely steps on the basis of proper monitoring of the market, both domestic and foreign, is not happening for the first time. This had happened on a number of occasions in the past also.

When prices of any item goes up abnormally, the MoC does, usually, hold meetings with traders concerned and request the latter to do fair business and provide relief to the consumers. The traders do also assure the MoC top notches of doing the needful. But nothing happens on the ground. Some weeks ahead of the holy month of Ramadan organising such meetings has been a routine affair for many years. However, consumers do not attach much importance to all the exercises that the government does following the abnormal rise in the prices of any item.

There are allegations galore that a section of unscrupulous importers, millers and traders fleece the poor consumers by forming an unholy alliance. There have been many instances where dishonest section of traders would keep prices of some items at high level though the international prices are found to be declining.

The government, however, does not take the allegations very seriously. This is evident from its actions in the event of hike in prices of essentials unreasonably. Such indifference rather emboldens the dishonest section of traders to exploit the poor consumers whenever opportunities come.

Then why should there be any shortage of onion? There could be a nominal sympathetic rise in prices of onion in the domestic market following upward revision of export price of the item by India at US$850 a tonne. But, given the domestic supply situation, the prices should not have doubled in Bangladesh.

Under the circumstances, consumers should have valid reasons either to question all the official statistics about onion production or suspect the existence of an 'unholy' alliance of relevant traders that is out to make undue profit. Will the government bother to look into the issue and try to identify the true reasons behind the unusual hike in prices of onion?