Socialist agenda in British and US election campaigns 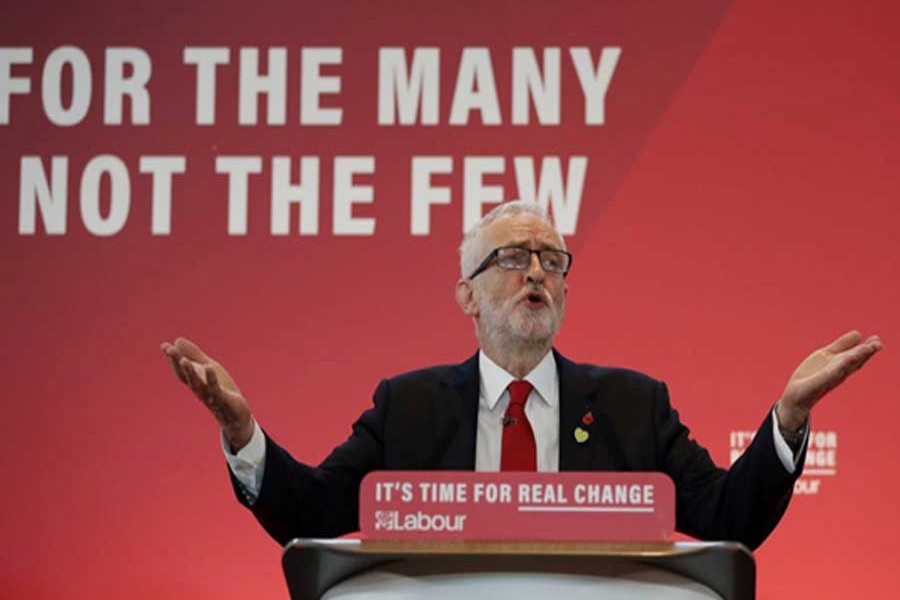 Jeremy Corbyn says the election is a 'once-in-a-generation chance' to transform the UK. -AP

For the first time, socialist programmes have figured prominently in election campaigns of America and Britain almost simultaneously, in recent weeks.  The snap election called by British Prime Minister Boris Johnson will take place on 12 December, giving candidates barely a month for campaigning. Barring an unprecedented election upset, either the leader of British Conservative Party, Boris Johnson or the leader of Labour Party, Jeremy Corbyn are likely to be the new occupant of No. 10 Downing Street.

In America, while President Trump is most likely candidate from the Republican Party in the next Presidential election in November next, as many as 12 Presidential hopefuls belonging to Democratic Party are vying with each other to get their party's nomination. As of now the nomination of the Democratic presidential candidate is up for grabs, with opinion polls showing fluctuating popularity of the candidates in the top rung. This difference apart, what distinguishes the campaign of the 12 Democratic presidential hopefuls is the emergence of two candidates with election manifestos that are copycat of each other. Both Bernie Sanders, the Senator from Vermont and Elizabeth Warren, the Senator from New York have boldly declared their election manifesto that have distinct socialist leanings. Of course, Senator Barnie Sanders is not a dark horse, having run unsuccessfully for nomination of his party with a socialist agenda. But Senator Elizabeth Warren is a neophyte in politics and did not show her hand until she became an aspirant for White House. In the course of her campaign, particularly recently, she has made no bones about her socialist leanings. After she spelt out her election manifesto it became evident that she is more radical in the pursuit of socialist programmes than veteran Barnie Sanders. None of them however have described them as textbook socialist with doctrinaire convictions and ideas about management of the economy. Neither of them have any plan for taking over the control of industries or utilities. But their insistence on radically overhauling healthcare and reforming student scholarship has won them the sobriquet `socialist'. President Trump has lost no time in resurrecting the fear of `red takeover' that many Americans nurture subconsciously. It seems that he has not taken note of the change in the mindset of people in his country that has taken place in the wake of the end of the cold war.

For Labour leader Jeremy Corbyn it is not much of a surprise to commit himself to socialist agenda because the far left in his party has always upheld the ideology of socialism that was crafted by their political guru, Sydney Webb, after the second World War. It constituted the main plank of welfare state under Labour government and became known as the hallmark of British Government until it was viciously dismantled by the 'Iron Lady', Maggie Thatcher.

It is natural that when two Democratic presidential candidates in the US promise radical changes in some sectors of their nation's economy that they should make news and ruffle the feathers of quite a few moderates in their party. But it seems the old guards in the Democratic Party also have reservations, even suspicion about the socialist agenda in the manifestos of two of their candidates. Decision in this regard will be made when the latest results of opinion polls pour in from the grassroots. As of now the ballast of the campaigns of the two 'socialist' candidates has come from the millennial who are fed up with corporate capitalism. It remains to be seen whether this trend will be sustained till the convention of the Democratic Party is held six months later.

In Britain there is, of course, the memory of the past when socialist agenda was put into practice by the Labour Party and a welfare state was ushered in. The only question is whether the voters belonging to the far left in the party can muster majority to handover a victory to Jeremy Corbyn. True, the baby boomers and members of Generation  Z are sick with the placating attitude and obsequious tendency of moderates who flaunt themselves as the New Labour. It is also a fact that they are disenchanted with the performance of the downsized government under the Conservative Party that has given the middle class and workers a raw deal. Their grievances against the government of the right heightened particularly after the financial crisis of 2008 that exposed the weakness of the system. Desire and demand for a change is rife among this disgruntled electorate and the Labour Party has sensed blood. Far from being mealy-mouthed, Labour Party under Jeremy Corbyn has promised return of the party as it was under Clement Attlee when the welfare state was established. Labour Party under Jeremy Corbyn wants fundamental changes in ownership of utilities including water, gas, electricity and the railway bringing these back under the management of the government. Alongside this, taxes on the rich and corporate sector will be increased manifold to pay for the socialist programme. The changes will be broad about in a way that future parties will struggle to unravel them, it has been indicated. As the Labor Party sees it, this is about fairness and reorienting an economy that works for those at the top and not for the young, unemployed and those struggling with part-time work. It has been indicated by Labour leaders  that their election manifesto is just a start. The party is studying an array of even more radical programmes including fewer-day work, workers' ownership of company shares, cap in executive's pay and an end to generous bonus to bankers, a universal basic income, a right-to-buy for tenants and punitive tax on lazy landlords.

In contrast to the election campaign by Labour Party in UK, there has been no promise by the two Democratic candidates with socialist agenda in the US about the role of government to revert back to a past of 'Democratic socialism' or a welfare state because there was no such experience in American history. Even President Roosevelt's New Deal introduced after the great depression pale before an all-caring welfare state that Britain evolved right after the Second World War. All that the two politicians from the Democratic Party with a socialist agenda want is to replace the inequitable healthcare system that benefits the insurance companies and the pharmaceutical sector. In addition they want to alleviate the crushing burden of bank loans taken by students with some sort of subsidy or government grant. Neither of the two candidates wants to replace the free market system for a wide variety of economic activities. They have identified only two of the most burning issues, healthcare and financing higher education and want to tilt the balance of advantages in favour of the users, particularly the middle class. Compared to Bernie Sanders, Elizabeth Warren has been more specific and more forthright in outlining her programme covering these two programmes.

What has moved Elizabeth Warren to pursue her hard-line socialist programme for health and education is the data showing younger people supporting socialist programmes in increasing number. According to a Gallup Poll, the percentage to 18 to 29-years-old Americans who have positive views of socialism has held steady at 51 per cent while the percentage of people in favour of capitalism has declined from 68 per cent to 44 per cent since 2010. If this trend among the young continues she may even go for breaking up big companies and impose a wealth tax on people with assets over $50 million. She has already promised to raise back the corporate tax to 35 per cent from where President Trump brought it down to 25 per cent. She has assured again and again that for implementation of her programmes only the rich will pay through higher taxes. She has made it clear that her agenda is to increase the public option for the middle class and the poor and through this reform capitalism as it stands now.

The general election in UK to be held next month will show whether the electorate, disenchanted with the performance of the Conservative Government, particularly its espousal of 'business as usual' policy based on unmitigated capitalism will opt for a return of the welfare state under the Labor Party. Since the nomination of the candidate from the Democratic Party is unknown, the convention being six months away, nothing can be said at this point in time whether a candidate with socialist agenda will challenge Donald Trump or anyone else in the US. But the fact that two presidential hopefuls from the Democratic Party are already sending ripples with their unconventional prescription to cure the ills of America's corporate capitalism speaks volume about the 'radical' change that has taken place in American politics. Perhaps for the first time 'socialism' is no longer a dirty word in America, President Trump and his ilk notwithstanding. This is nothing short of coming of age for American democracy.