Social disutility of the superrich 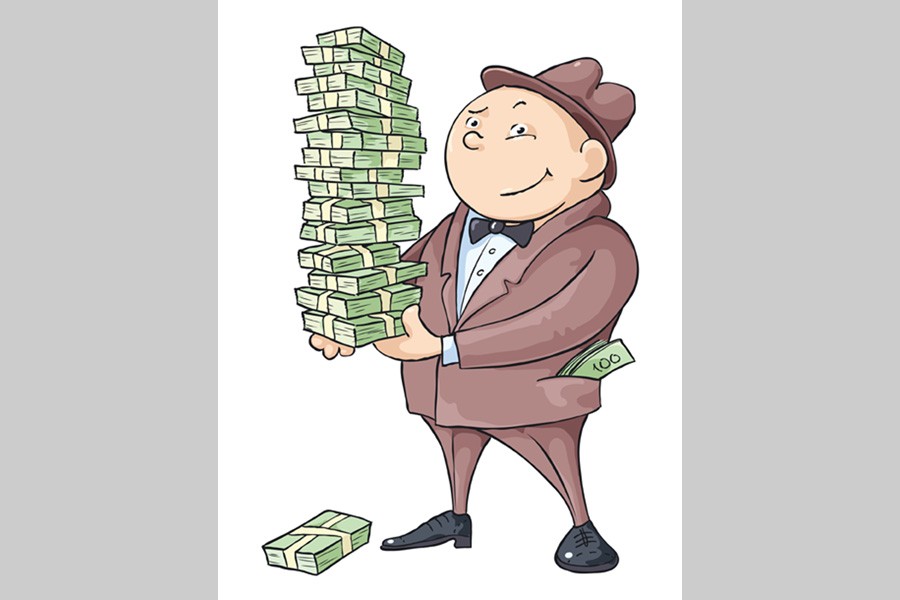 The latest November 2019 UBS/PwC Billionaires Report counted 2,101 billionaires globally, or 589 more than five years before. Earlier, Farhad Manjoo had seriously recommended, 'Abolish Billionaires', presenting a moral case against the super-rich as they have and get far, far more than what they might reasonably claim to deserve.

Manjoo also argues that unless billionaires' economic and political power is cut, and their legitimacy cast in doubt, they will continue to abuse power to further augment their fortunes and influence, in ways detrimental to the economic, social and public good.

BENIGN BILLIONAIRES? In defence of billionaires, Josef Stadler, head of ultra-high net worth at UBS Global Wealth Management, argued that their wealth "has also translated into their philanthropy, as billionaires seek new ways to engineer far-reaching environmental and social change."

Philanthropic ethics expert Chiara Cordelli notes that philanthropy and donations have diverted social responsibility from governments, and created other problems by bypassing democratic political processes and accountability. "The philanthropist should not get to decide - in virtue of her or his disproportionate influence - which world we should live in".

An ostensibly benign 'billionaire effect' cannot offset the adverse impacts of billionaires' wealth accumulation, tax avoidance and abuse of power to corrupt political processes and policy making. Rather, 'every billionaire should be regarded as a policy failure'. To create fairer societies, we need to end extreme wealth concentration and its problematic consequences.

DUBIOUS SOURCES: Robert Reich has shown that a significant share of billionaires' wealth is undeserved and does not bear any reasonable connection to their ability, intelligence or contribution, as expected in a society supposedly based on meritocracy and fair competition.

Oxfam estimates that about a third of billionaire wealth is inherited. There is no real economic case for inherited wealth as it undermines social mobility, economic progress and meritocracy, the main basis of legitimation in modern society.

Other work finds that about 43 per cent of billionaire wealth comes from crony connections to governments and monopolies, e.g., when billionaires use such connections and corruption to secure government concessions and contracts.

In developing countries, this share was even higher, 56 per cent, according to a 2015 Oxfam study. The Economist's crony capitalism index also suggests that corruption and crony connections to governments are behind much billionaire wealth.

Another source of billionaire wealth is abuse of monopoly privileges granted by patent laws. While intellectual property has been justified as necessary for innovation, recent research, summarised by the The Economist, disputes the supposed link between patent rights and innovation, and deems the patent system a dysfunctional way to reward innovation or new ideas.

Since the 1980s, patent rights have been extended well beyond what may be considered necessary to incentivise innovation. For Richard Posner, a respected US judge, "such extensions offer almost no incentive for creating additional intellectual property".

Insider trading - taking advantage of privileged information not yet made public - has been significantly abused for 'unfair' advantage in markets. The New York Times has found, "Some of the most prominent cases of illegal insider dealings have involved very wealthy people".

GROWING WEALTH CONCENTRATION: A large and growing share of the global economy is controlled by a few large transnational corporations (TNCs). Decades of mergers, acquisitions and ineffectual anti-trust legislation have seen market power concentrated despite claims to the contrary.

Such TNCs, cartels, other monopolies and oligopolies extract lucrative rents, enabling them to secure super-profits, accelerating wealth accumulation and concentration at the expense of petty producers, workers and consumers.

The way wealth is used by the superrich confirms their own 'social disutility'. They accumulate more quickly by paying as little tax as possible, making good use of tax advisers and havens. A study found that the super-rich pay as much as 30 per cent less tax than they should, denying governments billions in lost tax revenue.

The extremely wealthy also get the best investment and tax evasion advice, enabling billionaire wealth to increase by an average of 11 per cent annually since 2009, far more than average investors and ordinary savers get.

'DARK MONEY' CORRUPTS SOCIETIES: The secretive Society of Trust and Estate Practitioners (STEP), representing over 20,000 wealth managers, has successfully lobbied many governments to reduce taxes on the richest. STEP has spent billions to 'buy' legal impunity, politicians and the media to lower taxes on its clientele. Such lobbying has accelerated wealth concentration and accumulation.

Such 'dark' money is used to influence elections and public policy the world over. An Oxfam study has shown how politicians have been 'bought' by Latin America's super-rich, e.g., with substantial financial backing for ethno-populist, racist and religiously intolerant leaders.

NEOLIBERALISM "OVERSOLD": However, in recent decades, neoliberal economists have taken a much more benign view of oligopolies and monopolies, distinguishing them from classical liberal economists committed to market competition.

Conversely, insisting on competition in small developing economies has effectively prevented domestic firms from becoming internationally competitive by building on economies of scale and scope.

Significantly, even the International Monetary Fund (IMF), which imposed neoliberal policies for nearly four decades as a condition for credit support, now accepts that neoliberalism was "oversold", while the World Bank acknowledges disappointing growth after neoliberal reform.

Deregulation, liberalisation, privatisation and globalisation have strengthened the market power of corporations, reduced the progressivity of tax systems, reduced public provisioning, increased the frequency and intensity of financial crises, and slowed growth and development.

Jomo Kwame Sundaram, a former economics professor, was Assistant Director-General for Economic and Social Development, Food and Agriculture Organisation, and received the Wassily Leontief Prize for Advancing the Frontiers of Economic Thought in 2007.