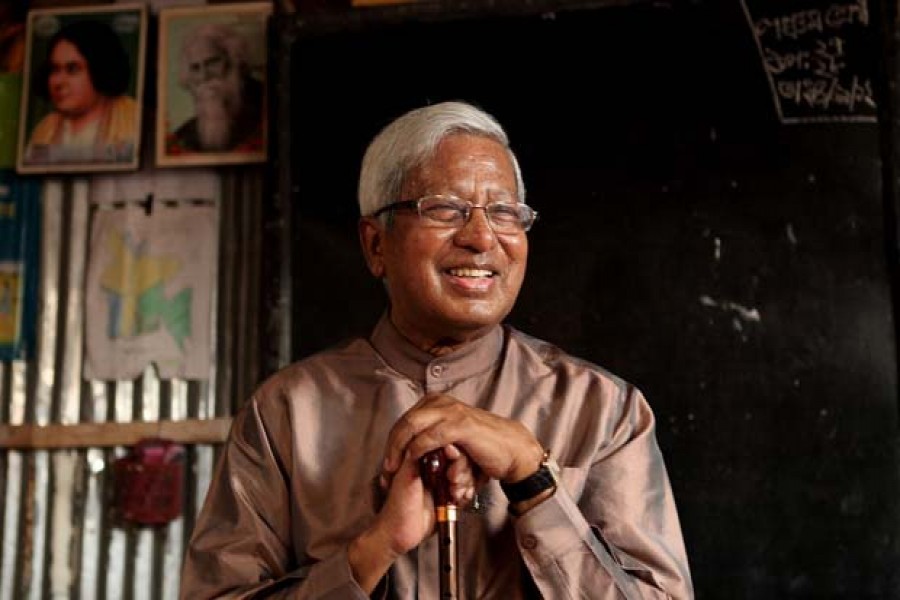 Sir Fazle Hasan Abed, the founder of BRAC, world's largest non-governmental organization (NGO), passed away in the evening of December 22 at a hospital in Dhaka. His death marked the end of an era.

I have had the unique opportunity to work with him at the very early stage of BRAC's intervention. Fazle Hasan Abed was the Executive Director and his office was in Dhaka. He selected Sullah and Derai in Sunamganj district for reconstruction and rehabilitation immediately after the liberation of the country. The area was severely devastated by the Pakistan occupation army. People returning from the refugee camps in India found their homes totally destroyed and were left to stay under open sky. BRAC launched a rehabilitation programme and assisted a large number of the people with housing materials imported from India. It was a massive undertaking and consumed several months to get the materials in place and delivered to the affected people. Abed Bhai, as he was known to his employees, would visit the project every month and would stay a few days with us to give guidance on how to manage the programme. There were local pressures but with Abed Bhai's unfaltering backing we were able to adhere to our own agenda.

As the rehabilitation programme was coming to an end, we thought we would be relieved and should be looking for jobs elsewhere. Sir Abed used to tell us that we were at the service of the nation and shouldn't consider our engagement with BRAC as paid jobs.

He himself had given up a well-paid job with an oil company before he joined the liberation war. At the dawn of March 26, 1971, as the Pakistan Army launched its brutal operation, he decided to leave the country. As the curfew was lifted he went to his office in Chattogram, applied for leave and quietly left for Karachi. After an overnight stop-over in Karachi, he flew to London and organised "Help Bangladesh" programme. In the month of May, he moved to Kolkata to orchestrate humanitarian assistance programme to the areas protected by the freedom fighters. The programme continued until the country was liberated in December 1971.

The rehabilitation programme that provided shelter materials to about half a million people earned the admiration of the donor community. In mid-1973, BBC broadcasted a 15-minute commentary highlighting the activities undertaken by BRAC. This was recorded and at the monthly meeting at the field office it was replayed in presence of Sir Fazle. He listened to the commentary and remarked that we shouldn't pay too much attention to BBC's evaluation. His explanation was: we knew we had lapses, we couldn't do as much as we wanted to do but BBC focused on our success stories only. "There is no room for complacency," he added. We were a bit disenchanted, but we couldn't have disagreed on his appraisal.

Sir Fazle would always insist that involvement of local population was a prerequisite to make the programme sustainable. Keeping this in mind we were instructed to restructure the "Cooperative societies" in the project area. Cooperative societies were led by the elites in the area. They would take lease of the fisheries and would enormously benefit while the members were paid as wage earners. We fragmented the cooperatives and upgraded the farmers/fishermen as members and enabled them to draw dividends from the profits earned by the society. This was a remarkable achievement. Within a few years, BRAC was able to restructure Sullah Cooperative Society on a new paradigm with the management and members.

Health care was non-existent in the area. BRAC appointed a few physicians and operated clinics but that was deemed utterly inadequate. In order to reach the most vulnerable, a squad of paramedics was trained, and under the supervision of Medical Officers the paramedics were assigned to villages to treat the patients suffering from common ailments. Simultaneously, a contingent of Lady Family Planning Visitors (LFPV) was trained and entrusted to counsel the expecting and nursing mothers in the villages. The services of the paramedics and LFPVs brought health care services at the doorsteps of the people in the project area.

Functional literacy programme was designed to encompass men and women with little formal schooling. The classes were held in the evening and the teachers were paid by BRAC. In order to promote functional literacy programme, it was felt that people would need a venue to discuss issues that were of concern to them. Sir Fazle suggested we should build "Gano Kendros" on the land people would select. His advice was that BRAC would pay for the construction of the GKs but people should get land by themselves. It was a daunting task. We began talking to the people and after some hesitations they slowly came forward with the sites. It was a painstaking effort, but the outcome was gratifying. GKs became a venue for meetings of cooperatives, literacy programme and social events.

Sir Fazle had a deep commitment on empowerment of women. He believed society could not march ahead leaving behind half of its population. In 1976, he recruited a batch of female university graduates and assigned them to Sullah project. The young ladies came from urban background but promptly adapted to local cultures. They would interact with women and girls on education, health care, population control measures and on issues that were relevant to disadvantaged women. Ayesha Abed Foundation, set up in memory of Sir Fazle's wife, was devoted to skills development of women from low-income families.

Sir Fazle realised that BRAC could not ignore the urban population. During the famine of 1974, he rushed to launch mass feeding programme in Rowmari, the hard-hit area in Kurigram, Rangpur. He started "Education and Health Care Project" in Manikganj in 1976 in order to serve the disadvantaged urban population.

The deterioration of the quality of education at the colleges and universities pained him. He deeply felt that in absence of quality education the graduates would not turn them into a productive workforce. The BRAC University was established with the pivotal objective to impart knowledge to the students enabling them to competently serve society. BRAC University, over the period, has been graded as one of the most reputed private universities in Bangladesh.

Sir Fazle knew well that BRAC could not depend on foreign financial support for an indefinite period. He was concerned that the on-going projects should not be affected by lack of funding. His first attempt was to set up a "printing house" to generate income and it proved successful. BRAC Training Centre also became another income-generating project. He was mindful that BRAC should expand its coverage of the beneficiaries and at the same time he ensured that the organisation should not be reliant on individual or individuals. When I left BRAC in 1977, he mentioned that he would love to see people having experience in working with BRAC would make space for themselves in different organisations at home and abroad.

I went to his office to congratulate him soon after he was honoured with Knighthood. I sat with him for about 45 minutes. He proudly mentioned that BRAC has been recognised as the best non-governmental organisation (NGO) in the world in terms of transparency and sustainability. I saw him last at the Shahjalal Airport in 2017. He was travelling to India to attend a conference and I was returning to Washington along with my wife. I saw him walking with a stick. He enquired about our wellbeing and we talked for a few minutes.

Sir Fazle Hasan Abed lived and died for the people he loved. The huge crowd that assembled at the Army Stadium, Dhaka and participated at his funeral prayer on December 22 underscored that people from different walks of life valued his contributions to society. May the Almighty rest his soul in peace.