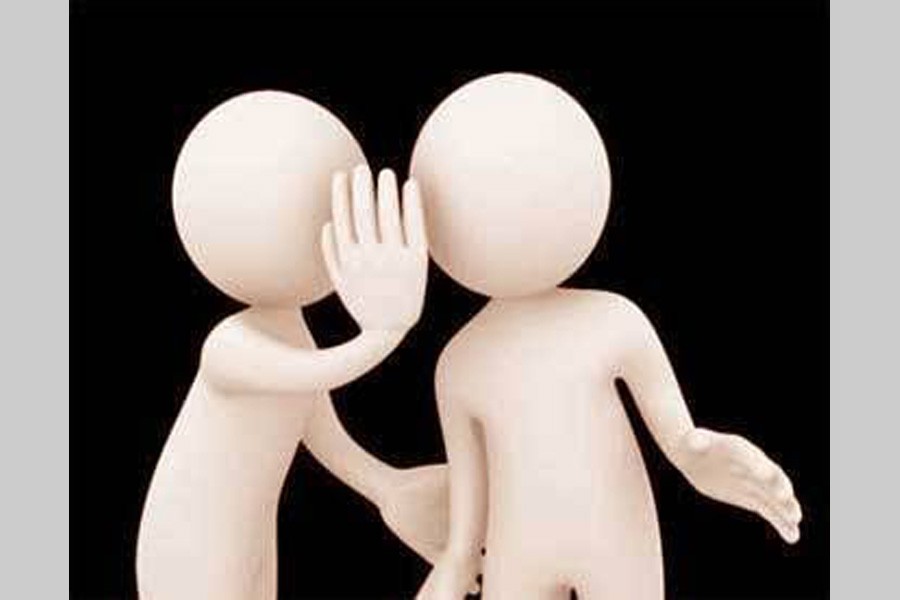 The two phenomena of 'rumour mill' and 'grapevine' outwardly carry similar meanings. But separate impacts and fallout come to the fore upon an in-depth look at their workings. Viewing casually, the activities of both the two are prompted by a single human trait -- giving free rein to one's imagination; on occasions in an aberrant manner. Human imagination loves taking wing, and visit the fanciful, at times blatantly unreal worlds created by the persons concerned.

Some relish throughout their lives these flights of imagination. They include chiefly creative people like poets, painters and novelists. With the ordinary people, these exercises often take perverse turns. These sections of people love to spread rumours with a motive which could be termed Machiavellian. They bother little about the impact of the baseless information they disseminate.

In many cases, rumours die down after creating a temporary stir, mostly of lighter or humouristic vein. This phenomenon is mostly found in the grapevines of the glamour world. Few in these circles believe in these 'news-breaks', but the rumours instil some phases of harmless excitement and suspense as well as innocent fun.

The rumours spread by some people often fly the wrong way. Many apparently innocuous rumours on becoming full blown are seen filled with lies, fears and distortions of truth. They gather poisonous debris during their mostly unpredictable course of travel. These baseless pieces of information cause embarrassment, and trouble for persons who haven't been particularly targeted by fun-loving, yet mischievous, rumour-mongers.

But there is also a dark and grim aspect of a different type of rumours. They are spread by a section of people having a crooked and pervert bent of mind.

The persons who run these rumour mills are incorrigibly crafty. They take preparations meticulously while devising a certain rumour's trajectory of flight. Experienced as they are in their trade, they keep their evil intention of their rumours hidden, at least initially. It's because they are fully aware of how the piece of their fictitious information will keep being twisted as they travel from one mouth to another. They also foresee terrible damages set to be wrought by their so-called innocent rumours.

One may raise a pertinent question: what is the psychology that drives a section of people to spread poisonous rumours. The answer is plain and simple. As they grow up, they develop the trait of pushing people into the zone inconvenience and trouble. This remains inherent with them throughout their lives. A lot of others are driven by the prospects for material gains. By victimising a person or persons with rumours targeting them, they at times make them isolated in society. Going further, they try to prove that certain members of a community are harmful to others. It finally results in the victims' ostracising. The following episode sees these evil quarters resort to extortion of the helpless people. In the cases of noncompliance with the former's demands and diktats, the victims are made to face extreme forms of persecution. As has been seen in communities devoid of literacy and civilised norms, people are frequently falling victim to rumour-mongers.

Syndicates of people spreading motivated and vile rumours are active in both rural and urban areas of Bangladesh. The recent spate of lynching innocent persons on suspicion of being child lifters drove the general people in the capital and the adjoining areas to the edge. At one stage, the scourge began spreading to far-flung areas. Thanks to stringent measures taken by the administration, the frenzy petered out at long last.

Lots people are found to be sickeningly suspicious. Few people could remain free of their 'probing' eyes in vulnerable situations. This happens generally at crowded places, in packed public transports or large open gatherings like a market. A section of people at these venues remain obsessed with hunting down pickpockets. Countless innocent people are reportedly humiliated at these places on suspicion of being pickpockets.

This type of humiliating people on mere suspicion has long been a part of human history. In medieval Europe, lots of women, some deranged and living outside the mainstream society, were burnt alive publicly on suspicion of their being witches. Witch hunts remained confined mainly to Europe and the Sub-Saharan Africa. But there are other types of community-prompted persecutions in the South Asia region. One particular community, stronger and larger in number, swooping on the weaker ones have for quite some time been a normal occurrence. Apart from material gains, the reasons for these conflicts have roots in ethnic and social class-based hatred and an irrational sense of class superiority.

In less developed societies, some of the people love to keep themselves obsessed with seeing others in trouble; while many others nurture ulterior motives or long-term agenda like evicting a community from their ancestral lands. Spreading rumour targeting possible victims makes the job easy. However, genetic hatred for a certain group of people also prompts many to go after them.

Apart from social villains in disguise, many others are found busy running their rumour mills round the year. They are active in both villages and cities. Many of them are arrogant in their acts. A group of people will drop a word in the air that a person has hired a hit man to kill someone. Their intention is to have the former harmed physically. As expected, the latter learns about the former's 'conspiracy' and bides time to swoop on his 'enemy'.

In the largely backward countries like Bangladesh, the impulsive would-be victims have little patience to think over the pros and cons of a so-called conspiracy. A faint rumour does the trick. Rumours travel from place to place and ear to ear in a lightning speed. Exaggeration adds to the dreadfulness of the episode. Nobody knows how long innocent and peace-loving people of Bangladesh may have to suffer at the hands of rumour-mongers. It's only tough rules and community resistance which can make a great difference.