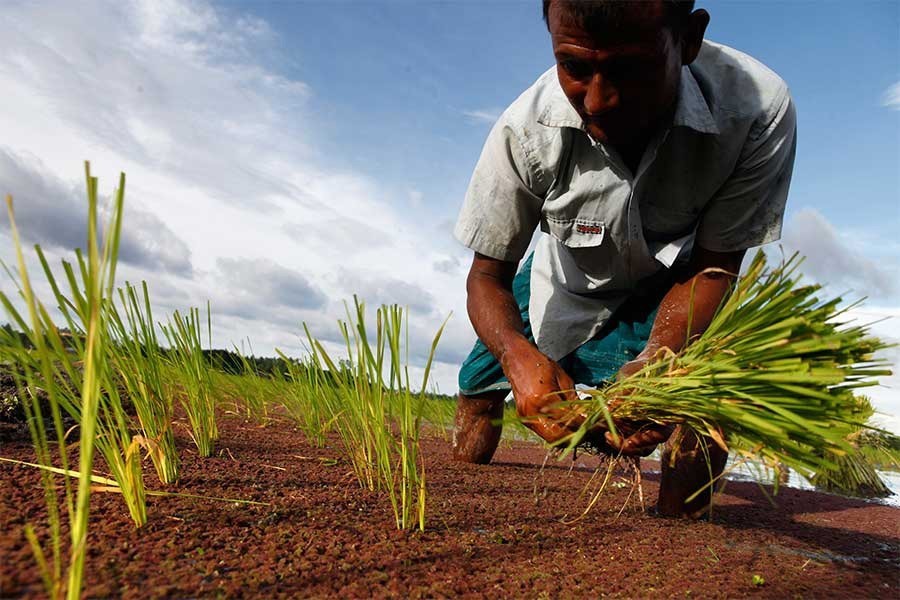 One of the great success stories of Bangladesh is its transition from a food-deficit land to a self-sufficient one. The Bangladesh Rice Research Institute (BRRI) has worked wonder in inspiring and capacitating farmers of the country on the way to tripling and even quadrupling production of the staple in cultivable lands. Today the total cropland has declined but production of cereal -paddy, wheat and maize - has gone up several times to feed a population double the size of Pakistan period.

For several years now - except in 2017 when early flash floods damaged crops in the Haor area of Sylhet due to negligence of timely repair of flood-protection dam - farmers are growing bumper paddy. This year is no exception. But sadly what should have been a cause for great celebration has turned into woes for farmers.

Low price of paddy has been so frustrating that farmers in different places in the country have made their anguish and protests known in unprecedented ways. Infuriated, a farmer in Kalihati, Tangail set his paddy field on fire. In Kishoreganj, a group of people set ablaze stacks of paddy right in the middle of a road. Farmers and their sympathisers have demonstrated, forming human chains not only in front of the Press Club in Dhaka but also elsewhere.

The smarter among farmers have already started growing cash crops - in some cases exotic fruits and vegetables that fetch them far better returns. Without farmers' contribution the country could not have attained the economic status it now boasts. It will be self-defeating to evade responsibility towards largest productive community in the country. Full attention must be given to solving the problems they are facing for no fault of their own.

It is primarily a result of policy flaws. When damage of Haor crops led to a policy review  on rice, traders started importing rice taking advantage of the duty slash from 20 per cent to just 2.0 per cent. So desperate was the situation that it caught the authorities off-guard at a time when it was too late for order for import of rice from the international market. One of the reasons for continuation of high prices for all varieties of rice was this late order and import. Prices then refused to drop even when the next local harvest was good. In keeping with the tradition, farmers did not get the price they deserved. Market manipulation was on to preserve the interests of rice millers and traders. The middlemen too had their share of the undue profit at the cost of farmers. In the Haor area this year, a powerful millers' syndicate reportedly dictated the term to keep price at a much lower level than elsewhere. The syndicate did not allow any outside buyers to the area.

This is how farmers are being exploited all across the country. The production cost of a maund (approximately 37 kgs) of paddy varies from Tk 700 to Tk 1,000 depending on paddy cultivation areas. But the same amount sells at Tk 450 to Tk 600. This means that a farmer has to incur a loss of Tk 250 to Tk 400 a maund. How outrageous. No market economy can justify this. The price difference between paddy at the farm level and rice at the consumer level is a glaring example of injustice. A kilogram of coarse variety of Boro rice in Dhaka sells at Tk 38 and in Mymensingh priced at Tk 30. On that count, 25 kg rice obtained from a maund of paddy is priced at Tk 750. But a maund of paddy is priced at Tk 500 only. Why? Counting processing cost at Tk 25 and a profit margin of Tk 25 for traders, the price of a maund of paddy could easily be Tk 700.

The story of exploitation of farmers is the same everywhere. Traders have made a stock of 6.0 million tonnes of rice notwithstanding the fact that the country has had two bumper yields in the past two years. Is there any ulterior motive behind it? Clearly, something is seriously wrong on the policy front. Buying paddy from millers is indeed a wrong policy. Miller do not grow rice, farmers do. So the target should be farmers in the first place. The government has mulled the idea of rice export. This would be a post-haste decision, the consequence of which may go not only against farmers but also against the country. It may rather serve the interests of rice traders and millers. The majority of farmers are compelled to dispose of their produce immediately after harvest because the sale proceeds are used for a number of long-postponed needs. The stockists or hoarders take full advantage of the late season prior to the next harvesting period.

True, at a certain stage of economic development cultivation becomes somewhat uneconomical. In industrially developed countries like the United States of America, farmers are a pampered breed and are granted many fiscal incentives. Bangladesh is not industrially developed but its farmers deserve reasonable fiscal supports. If loan defaulters are given outrageous concessions, farmers qualify for far better treatment. The government should develop an effective mechanism for purchasing paddy directly from farmers. If committees are formed at the grass-roots level with the responsibility of listing farmers willing to sell paddy at a designated centre, the task can possibly be accomplished without any hassle.