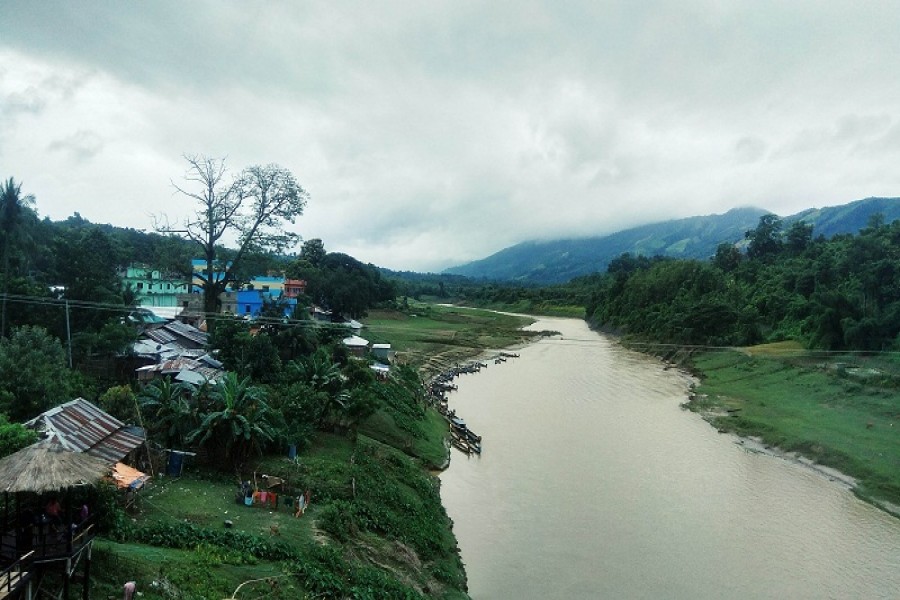 The defining feature of our country is its flat lands, which form 80 per cent of its landmass. Then suddenly, as we travel towards the South-East, we see some uncommon type of land, the hills of Chattogram. For those living in the plain, these hills present them with an undefining mystery and a challenge of adventure.

This writer with some of his friends took on this challenge last year when they visited Bandarban. The experience of the journey remains as fresh as a hot smoking cup of first flash tea today.

As we got on the bus, one of our friends was showing a video on YouTube, of an unknown stream, whose name and location the uploader kept secret as he believed people visiting the place frequently would disturb its tranquillity.

Little did we know, a few days later we'd be visiting that fall. The land of mystery was playing its game long before we stepped into it!

After an arduous 9-hour bus journey through the night, we woke up to the beauty of dawn in the hills, as our bus was hurtling through the hills of Alikadam. It took us more than 2 hours to get to the Alikadam Bazar, from where we took a scenic route, using motorcycles.

As we were visiting in September, some relish of the monsoon season was left and it started drizzling as soon as we got on the motorcycle.

Our bikes reached and rode through the famous peak of ‘Dim Pahar,’ on one of the highest motorable roads in Bangladesh. With the mighty Sangu river on our right and the beauty of the hills on our left, it felt like we were in heaven.

Soon we reached our destination, the Thanchi Bazar. A beautiful town beside the Sangu river, Thanchi was only accessible through the river a few years ago. It is now transforming into a bustling place of business, from a frontier town, thanks to the road connectivity.

Thanchi from the top of the Thanchi bridge. Photo: Sheikh Tausif Ahmed

The drizzle from our bike ride had continued throughout the boat-ride from Thanchi and soon it became heavy rain. As we trotted on our motorised boat, through the hills and against the wind and the water, it felt like we were fighting nature!

The trail was long and steep. We were going uphill and downhill at times and the whole trail was slippery because of the rain.

On the long trail, the Langlok reveals itself once, in a beautiful manner as can be seen in the photo above. It seems that the stream of water is falling from the top of a heart-shaped hill. The scenery was so unearthly that it made us stop on our trail and enjoy the beauty of the moment for a while.

Due to the monsoon, the stream was carrying a massive amount of water downhill. As it fell on the rocks below, some of it evaporated instantly to create a cloud around the fall and made us feel like we were in cloud number 9!

Returning from that, our boat carried us to the Remakri bazar, where we stayed the night.

The next morning, we continued our adventure by taking our boats near the Remakri falls. Due to the monsoon, the steps of the fall were submerged in the water and barely visible.

We went upstream from Remakri and then after some combination of trail walking and boat rides, we were on our way to our next destination, Nafakhum.

The last phase of the trail was a bit dangerous, as we went upstream beside a river trail, which was very slippery and muddy as well.

Finally, we reached our destination, the picturesque Nafakhum. We had already heard about the beauty of Nafakhum as it’s a well-sought destination for adventurers. But to see it unveil itself in front of our eyes was mesmerising.

Our guide informed us that the fall gives out this kind of view only during monsoon and it probably has one of the highest flow rates of all the falls in the country.

After witnessing the beauty of Nafakhum, we were returning and regretting not seeing another famous fall in the Bandarban hills, Debotakhum. It was inaccessible due to the heavy rain that had been going on for a few days.

Hearing this, our guide had planned to take us to an almost unvisited and in his words, “more beautiful than any other” waterfall - Choigong.

Remember the mysterious fall our friend was showing us on YouTube, it was this Choigong.

However, beauty comes with a price. Proving this proverb, Choigong, the well-kept secret of the hills, gave us our biggest challenge yet.

The writer has been to a few trails, at home and abroad, but this was the toughest one by miles. Maybe because not many people visited this fall before us, nature had kept it hidden away, creating all sorts of obstacles.

If the trail wasn’t hard enough, it started raining mid-journey and at that very time, we faced one of our biggest obstacles - an almost 90-degree steep, muddy hill. We had somehow crossed that and then some other obstacles. The whole trail was littered with large stones and deep pools.

After an arduous trek, we were finally at our destination. And seeing the beauty of Choigong before us, made the nightmare journey all worth it.

The fall wasn’t the tallest or it didn’t have the highest rate of flow like the previous ones, but it didn’t have to. The untouched natural beauty was accentuating our experience. The water was falling through many steps and the mellowed-out sunlight was creating a surreal environment.

Soon the light was dying out and we hurried back on the same dangerous trail. After that, we went back to Remakri Bazar and stayed the night.

The next day we went to Thanchi and enjoyed a beautiful 24-hour stay in the town. Soon we were on the bus back to this concrete jungle of Dhaka.

While the rawness of nature elated us beyond anything, noticing the mismanagement and lack of pollution awareness made us sad.

A combination of proper infrastructure and tourism management would not only make these spots easily accessible but also help keep the serenity intact.