The last weeks of the Liberation War 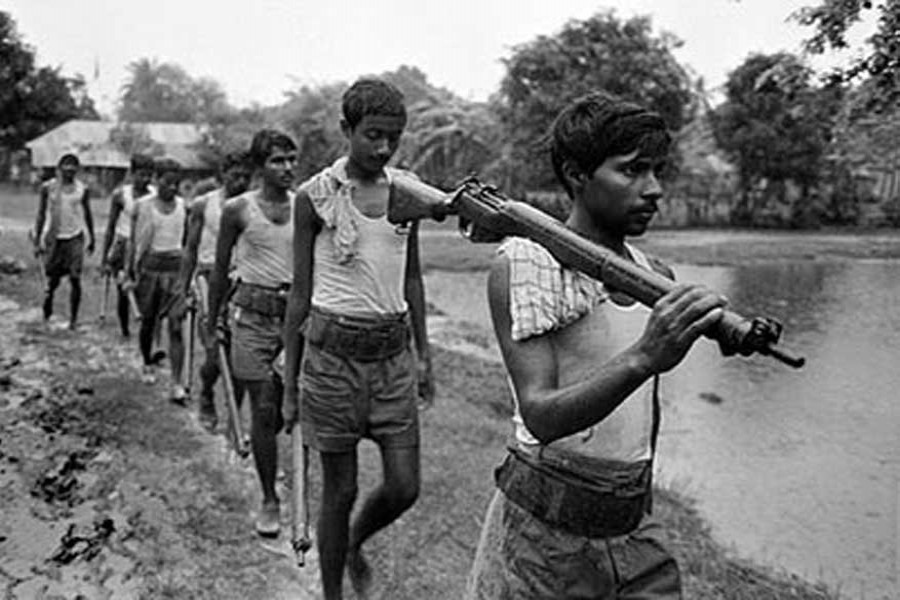 It was a matter of luck for many to have been able to see the start of the Bangladesh Liberation War on March 26, 1971, pass through the turbulent nine months fighting or being brutally persecuted and, finally watch the flag of the independent Bangladesh flying everywhere on the free land. And, of course, they have to remain alive in 2019 to reminisce about those days. The lucky persons should include those in their early or later youth in 1971when the war started. After the passing of 48 years, the age of these persons may range from the mid-60s to the early 80s. Many youths, however, died on the battle front, and some faced natural deaths. Those who survived the 9-month genocidal reign of the then Pakistani occupation army may be termed as having been born enviably lucky. A few encouraging elements are set to add to some of their lives. If they remain alive and hale and hearty in 2021, they can join the silver jubilee celebrations of the birth of Bangladesh. Few moments could be more precious and jubilant in the life of a nation, here Bengalees. Many of them have fought through the centuries to remain free of foreign domination.

That the occupation army would one day concede defeat to the heroic Freedom Fighters was veritably foretold. The past of the land, the socio-political realities in the 1960s-'70s, the upsurge of the Bengalees' heroic spirit, and foremost of these all --- able leadership, everything went in favour of the '7 crore' people of this land. The Liberation War began only to be won. In the history of freedom fights, few wars tasted a decisive victory in such a short time. The Bangladesh Liberation War assumed the form of a do-or-die fight in the months after March 26, the day of the declaration of independence by Bangabandhu Sheikh Mujibur Rahman. The fight ended with the Pakistani occupation forces' unconditional surrender to the Joint Command of the Bangladesh Armed Forces/ Liberation Forces and the Indian Army. The day was December 16, 1971, the venue the erstwhile Race Course Ground, now Suhrawardy Udyan. Thus in a period of nine months, a sanguinary people's war came to a close. A notable aspect of the Liberation War was, despite the short duration, it witnessed martyrdom of 3.0 million unarmed Bengalees and war heroes. At the same time, the marauding Pakistan Army's brutalities forced more than 10 million Bengalees to flee their motherland and take refuge in the neighbouring Indian states.

The view of Bangladesh as an independent and sovereign nation became quite evident from early December. Starting from December 03, 1971, the Indian Air Force's fighter and bomber jets pulverised the Tejgaon-Kurmitola airport runways besides destroying all the warplanes stationed in Dhaka. Within less than a week the Pakistan Air Force had found all its warplanes in Dhaka and Sylhet fully destroyed. Airports in Chittagong, Jessore and Cumilla also came under heavy bombardment missions. Finally, the occupation army found itself left with a handful of Cessna aircraft and helicopters.

By December 13, almost the whole occupied Bangladesh, except the capital Dhaka, became cleared of the Pakistan Army. Meanwhile, Akashvani, India's national radio, had been broadcasting repeatedly the command of the Indian Chief of the Army Staff Sam Manekshaw (later Field Marshal) for nearly a week. The command asked the Pakistani army generals and other officials to surrender to the Joint Command of the Bangladesh Armed Forces/ Liberation Forces and the Indian Army. Three days before the formal surrender of the Pakistan Army in Dhaka on December 16, the capital and its outskirts were encircled by Freedom Fighters and the Indian Army, also called the Allied Forces. The latter were armed with heavy tanks, field guns and convoys.

The countdown to the surrender of Pakistani forces appeared to have ended for the confused and panic-stricken Bengalees almost abruptly. Prior to the surrendering formalities in Dhaka, the city's air remained heavy with alarming speculations. One had it that before leaving the capital, the vanquished and trigger-happy Pakistani soldiers would unleash another bout of killings. As part of a 'scorched earth' strategy, they were said to be preparing for a campaign of killing people by moving house-to-house, destroying nationally important buildings and installations, burning down government documents etc. Those who heard such rumours prepared to leave Dhaka for safe shelters in the nearby villages. That the rumours  were not totally baseless became clear from the midnight of December 13. For three consecutive nights from that day, a Pakistani Cessna and a helicopter dropped bombs on residential areas in darkness. The bombs mainly fell on the eastern Dhanmondi area and Karwanbazar. An unexploded heavy bomb was discovered on the morning of December 15, which had strengthened the speculation about the Pakistani soldiers' resorting to pre-surrender brutality.

Meanwhile, Dhaka had been under a non-stop curfew for almost a week. Few residents of the capital could have imagined that the curfew in fact remained in force as a cover under which hooded anti-Liberation War killers were hunting down the intelligentsia, journalists and professionals to take them to the killing fields. The dastardly episode became clear after two days as people discovered the blindfolded, bullet-ridden bodies of many illustrious sons of the soil on the barren lands west of the city.

Three days before the December 16 surrender of the Pakistani soldiers, people came to know that the US Navy's Seventh Fleet had been detected entering the Bay of Bengal. The fleet had been presumed to be speeding towards Bangladesh to save the Pakistan occupation army's bastions in Bangladesh. The news evidently emboldened the Pakistani army establishments in Dhaka and their lackeys and collaborators. Thanks to the historic Soviet veto on the US-Pakistan proposal for a ceasefire in 'East Pakistan', all stratagems against the Liberation War fell flat. It had added considerably to the speed in which the Liberation War was rushing to its denouement. From the afternoon of December 16 onwards, the slogan 'Joi Bangla' began rending the air of Dhaka. The Mukti Bahini (Bangla for Freedom Fighter) members eventually swarmed on the nation's capital from all parts of the country. Bengalees lovingly called the day Victory Day. After 48 long years of surviving as an independent nation with marks of achievements left in many sectors, Bangladesh has irrevocably carved out a distinctive place on the world map. The nation's pledge on the 50th anniversary of independence in the year of 2021 should naturally be the commitment to an unwavering march. There are still many drawbacks and leftovers from the past. Bangladesh looks forward to the younger generations to cope with these challenges.

Digitalisation no guarantee against graft