The death of Shireen: shooting the messenger 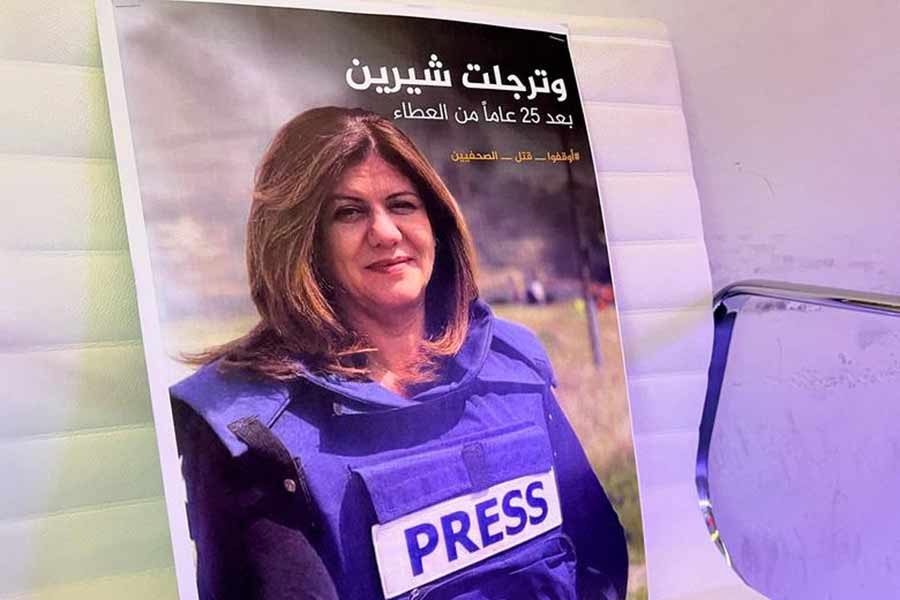 A picture of Al Jazeera reporter Shireen Abu Akleh, who was killed by Israeli army gunfire during an Israeli raid, is displayed in Al-Jazeera headquarter building in Doha on last May 11 –Reuters file photo

Shireen Abu Akleh, the late Al Jazeera reporter, being mortal, was destined to die one day. But she did not deserve to die the way she did -- by the lethal bullet of an Israeli sniper that fell her unaware while on duty near Jenin camp in occupied Palestine. By most accounts, it was a murder 'most foul', a premeditated one committed in cold blood. Her name has now been added to a growing list (42) of journalists brutally killed by the occupying Israeli force while doing their rounds in occupied Palestine since 2000.

Like her colleagues in the profession of the fourth estate across the world, Shireen was a purveyor of truth, particularly a messenger of news through live coverage of events from ground zero. In that challenging role she became the voice of the oppressed Palestinians living their uncertain lives and facing untimely deaths since Israeli occupation. She knew she was in the cross-hairs of the most ruthless and inhumane regime in contemporary world for her bravado and courage in exposing its brutal repression and atrocities against the Palestinians. Undaunted, she went about her rounds, as and when required, to bring before the viewers news through live footage in real time. Being the usurper of the land and terminator of livelihood of the occupied population, Israel seems to have decided that it can cover up or ignore the truth about its acts of gross violation of human rights and wanton violence against hapless Palestinians in whatever manner it chooses. Ironically, this contempt of truth resurrects the memory of Pontius Pilate, the Roman Prefect in Judea (old Palestine) who had asked in jest, 'what is truth?' and did not wait for an answer. The Israeli government and the majority of Israelis look upon truth about their inhuman treatment of the Palestinians with the same scorn and cynicism as the Roman Prefect, the difference being, this time around, they are not the victims of persecution but its perpetrator. But even to cynics like them, truth being told time and again, appears as nettlesome audacity, calling for swift retribution. Knowing that they have the capacity and power of presenting alternative truth, the Israeli government finally decided to do away with another messenger of truth in the person of feisty Shireen Abu Akleh. By appearing at the time of the overnight crackdown by Israeli army near Jenin camp she had shown defiance of their authority one time too many. The Israeli high command and their political boss, exasperated to no end by her relentless exposure of their ruthless conduct, characteristically reckoned that her time was up.

At the time of her death by a Israeli sniper bullet Shireen was wearing a flak vest emblazoned with the word 'Press' that could be seen even from a good distance. But it did not deter the trigger-happy killer under orders from above; it only made the murder in cold blood easier. There was no crossfire, as alleged by Israelis as a cover up later, because the stone throwing Palestinian youngsters were not visible anywhere near the spot where Shireen fell to the ground. It was a clear and unambiguous case of premeditated target killing by the Israeli army.

Shireen was not spared from the wrath and hatred of the Israeli government even after her horrific death. Far from showing a modicum of respect to the departed soul, the Israeli authority slapped restrictions on the family of Shireen prohibiting taking her coffin in a procession to the church where the funeral service was to be held. Israeli riot police beat up the crowd of mourners who had gathered at the hospital where her dead body was kept to pre-empt any attempt at taking out a procession. As the car carrying the body of Shireen neared the church in East Jerusalem, Israeli riot police swung into action against the mourners whose number had swelled, including some carrying the Palestinian flag. Despite a court ruling that carrying Palestinian flag there was not illegal, the riot police snatched and trampled on the flags in blind fury. A scuffle ensued between the mourners and the marauding police during when stun grenade was used by the latter injuring many mourners. This was completely without provocation to the Israelis though there was more than enough provocation for the Palestinians to be riotous. Too shocked with grief at the sudden death of their beloved icon to respond with their signature violence of stone throwing, the mourners bore the police assault with patience. Despite this non- violent stance about two hundred mourners were arrested at different stages of the mayhem. At one point when police was rampaging through the crowd, the coffin, with the dead body of Shireen inside, tilted vertically slipping from the hands of pall bearers and almost fell to the ground. Such a show of barbarism and utter lack of sensitivity on the occasion of the last rites of a deceased has no precedence in modern times. If there was any doubt about the contempt and sneer with which the Israelis hold the Palestinians under their occupation, the live coverage of the atrocities of Israeli police against peaceful mourners should lay it to rest. It is the apogee of irony that the dead body of Shireen had to do what she had tirelessly put up as a messenger of truth for the last twenty years: highlight the inhuman treatment of the Palestinians by their occupiers on daily basis. There are not words strong enough to condemn this bestial behaviour of the occupiers. Any person with a touch of humanity in him/her will spontaneously ask, quoting  W.B.Yeats : 'After this, what forgiveness?'

Condemnation of the dastardly killing of Shireen was swift and widespread. But it also showed the divergence of perspectives and the degree and nature of outrage. In the Western electronic media the condemnation was delayed and when it came, was pro forma, without genuine feelings. The moral outrage that is on display while reporting killing of civilians in Ukraine by reporters of BBC and CNN were conspicuous by its absence, confirming the view that all killings are not the same, that identities of who and where the victims are from matter to the Westerners and their handmaiden media. The response of American Administration was typical, and came as no surprise. The State Department spokesperson condemned with a deadpan expression, observing that the killing should be held to account and concluding that Israeli government had the capacity to conduct a fair and independent investigation. It sounded as a sick joke even to those who toe the American line at the fall of the hat. How can those suspected, nay accused, of the dastardly killing of Shireen be expected to carry out an independent investigation? On other hand, if the Israelis are as innocent of the crime as they pretend to be, why should they object to investigation by an independent third party? To judge by the past, a perfunctory investigation will be held by an international authority, perhaps UN or by Israeli government itself, absolving the Israeli army and the matter will be consigned to oblivion. After all, public memory is short and news of a death, however sensational, is overtaken by others coming in quick succession. Shireen's death, however tragic, will not merit even a footnote in history.

But the issue is greater than the death of Shireen Abu Akley and it will not be buried with her mortal body. Her assassination, at the hands of the abominable regime in Israel, has highlighted the continuing violation of human rights that takes place under the aegis of Israeli government in occupied Palestine and denial of justice to the Palestinians. Occupied Palestine has been the site of the longest running conflict in the world and chronic violent clashes between the occupier and the occupied resulting from it. The impact of the conflict may not be as dramatic as that in Ukraine at the moment. But the panning out of the conflict over a long period of time does not attenuate its vicious and egregious nature. Rather, it remains as a glaring example of aggression, illegal occupation and rule by the hateful system of apartheid. By dint of that, it is not merely a slow burning problem but a flashpoint that may one day explode into a greater conflagration, drawing many countries. Occupied Palestine remains a perennial case of an incendiary situation on short fuse.

The conflict is so tragic because its solution is very much within the realm of possibility. With political will America alone can ask Israel to agree to the Two State solution mooted long ago. But it won't because of the powerful Jewish lobby and the Defence establishment-- the deep state of America. The defence establishment is the real political force that guides American foreign policy. It is in the interest of defence establishment, backed by defence industries, that conflict and armed clashes have to be stoked all over the world. Nothing else explains why NATO had not only to be maintained but expanded after the collapse of Soviet Union. It does not require super intelligence to realise that promotion of defence industries is the main reason behind the Ukraine war and all the other armed conflicts around the world. The long simmering conflict in Palestine is part of this great narrative of American policy because it highlights the need for arming Israel to the teeth in the name of safeguarding her security needs. There was a time when Europe distanced itself from the war-mongering foreign policy of America. It was then that the Oslo Accord was forged on the basis of two-nation doctrine. After years of blood-letting and foot-dragging by Israelis,  a solution of the Palestinian problem seemed tantalisingly close. But a peaceful settlement of the Palestinian problem was not in the interest of either America or Israel. For both, a solution meant giving up something very valuable-- for America reduction of arms supply to Israel; for Israel surrendering occupied  land.

The war in Ukraine has now robbed Europe of its independence in foreign and security policy making. The dancing to the tune of America that has started with Ukraine war will not be over anytime soon. So, in the absence of a neutral and fair-minded power, the fate of the Palestinians will continue to be languishing in oppression and misery until a country not under the thrall of America in the Middle East emerges as a nuclear power. It will be a supreme irony when the weapon of mass destruction will force peace in Palestine through the erstwhile cold war doctrine of mutually assured destruction (MAD). In a world dominated by warmongering America, backed by her defence establishment, only nuclear weapon appears to be the deterrent. It is a sad commentary on the world order that prevails.