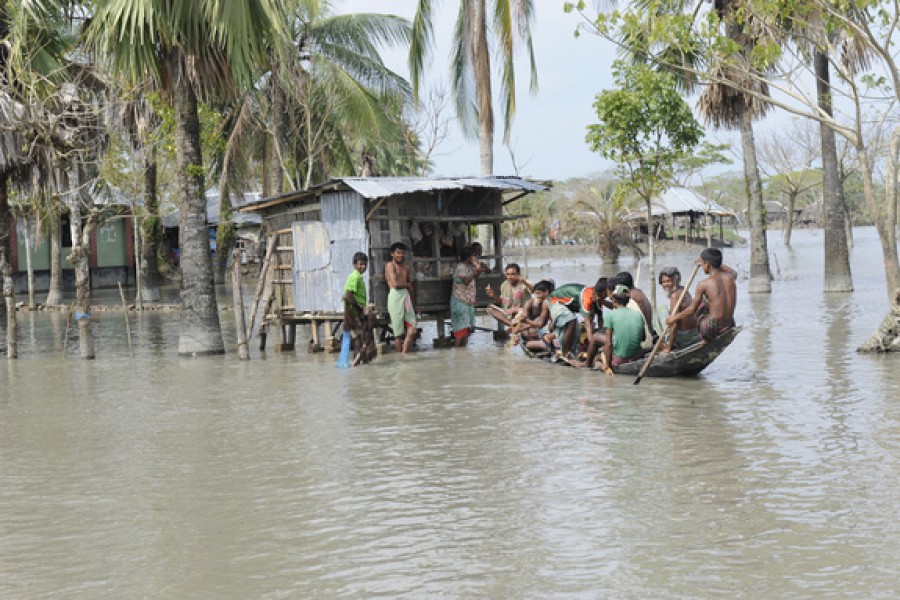 "Climate Change is humanity's greatest threat in thousands of years….which could lead to the collapse of our civilisations and the extinction of much of the natural world," said famous naturalist Sir David Attenborough one year ago. Global temperatures have risen by 0.9 oC since 1850, with each of the last three decades being warmer than the previous one. The frequency and intensity of natural disasters due to increased greenhouse gas emissions has also risen in tandem.

As a low-lying coastal region, Bangladesh lies at the centre of this transformation. According to German Watch's 2017 Long-term Climate Risk Index (CRI), Bangladesh ranks 7th among nations most vulnerable to climate change, losing around 0.64 per cent of its GDP (gross domestic product) due to climate-induced disasters in the last two decades. The impacts of this changing climate have manifested in Bangladesh through multifarious mediums - rising natural disasters, migration, urbanisation, poverty, diseases, water insecurity, resource constraints, conflicts, and many more with each intricately linked to the other.

CLIMATE CHANGE AND SECURITY: For Bangladesh, climate change poses threats that are direct and also indirect. One key consequence of it is the increasing frequency and scale of natural disasters. While not alien to frequent natural disasters, Bangladesh has already faced two mega cyclones in 2019 i.e. Cyclone Fani and Cyclone Bulbul, that caused an estimated Tk 5.36 billion and Tk 2.36 billion worth damages to crop yields alone. Even though deaths due to such natural disasters have sharply fallen over the last decade, primarily owing to impressive mitigation efforts, the financial implications remain a major concern.

With approximately 170 million population, Bangladesh is the 8th largest country in the world, and Dhaka alone is housing about 20 million, making it the densest city in the world. To feed this burgeoning population, the country has relied on primarily homegrown crops, while climate change threatens sustainability of this system through multifarious ways. Also, increasing salinity in ground water driven by sea-level rise, is affecting quality of crops and causing drinking water shortage and contamination.

Despite advancements in food production, around 60 million people consume less than the recommended calorie, which climate change can only make worse, particularly in rural areas, as crop yields suffer.

One of the by-products of such lack of nutrition and access to clean water is the threat to health. The World Health Organisation (WHO) estimates that about 8.5 per cent of all diarrhea-related deaths in Bangladesh in 2030 will be caused by climate-related impacts. While diarrheal deaths are expected to fall, the proportion dying due to climate impacts will rise, thus hamstringing the government's drive against such virulent diseases.

Furthermore, deaths among Bangladesh's elderly population due to extreme heat is expected to increase to almost 30 deaths per 100,000 by 2080 compared to four deaths per 100,000 between 1961 and 1990. More alarmingly, the cause of the country's worst dengue outbreak of this century in 2019, which killed at least 60 people and infected around 30,000, has been linked to the Aedes Aegypti breed, which thrived in rising temperatures and urbanisation in the country.

The rising frequency of natural disasters, sea-level rise, river erosion, and salinity increase have permanently changed the lives of many rural Bangladeshis, forcing them to move to already dense urban areas in search of a sustainable livelihoods. However, the already dense urban regions struggle to accommodate the climate migrants from the country's rural areas, a process that may threaten to disrupt basic social services. Climate change has become one of key drivers of rural-urban migration with studies estimating around 10 million new migrants in the next two decades.

With fight for limited resources growing more intense, it is not just petty crimes in suburbs that rise, but also other forms of conflict. Recent studies show evidences of conflicts between different groups of people that are linked to climate change, especially its effects on resources in rural areas.

FINANCING THE FIGHT: Bangladesh has been one of the earliest responders among least developed countries (LDCs) for climate change adaptation and mitigation with the government compiling its first policy memorandum in 2005 in the form of the National Adaptation Programme of Action (NAPA). The subsequent 2009 Climate Change Strategy and Action Plan (BCCSAP) provided a more comprehensive strategic and policy framework to tackle the climate change-induced impacts for Bangladesh. In terms of mitigation, Bangladesh is set to reduce the Green House Gas emissions only by 5 per cent below the business as usual level which is insignificant compared to most other developing countries such as India which has targeted a 33-35 per cent reduction.

However, for Bangladesh, climate change adaptation is a greater issue as the country has been at the receiving end of impacts from external actors. Climate Change is expected to lower the country's real GDP by around 4.3 per cent by 2030, compared to the business as usual average (BAU) - a significant cost for a $280 billion economy. The burden of tackling such costs can become crippling for this underdeveloped state, and a very unfortunate incidence considering that developed countries have been responsible for most carbon emissions that haunt developing nations today. Climate expert Saleemul Huq recently stated: "The States of Texas, Florida, and Puerto Rico assessed an estimated cost of US$300 billion for 3 hurricanes and are sending the bill to US Congress who have agreed to deliberate on their merit. But who does Bangladesh send its bill to?"

Bangladesh's progress in terms of shoring and using financing modules have been commendable, but far from adequate. Bangladesh's Intended National Determined Contribution (INDC) Roadmap estimates a requirement of almost US$70 billion till 2030 for climate change adaptation and mitigation, out of which around US$6.8 billion has been spent through local channels so far. The Green Climate Fund (GCF), under the wings of the Paris Agreement, had earmarked around US$10 billion for mitigation and adaption in the most vulnerable countries. Out of the approved US$5 billion, Bangladesh has been able to receive a meagre US$85 million in three projects - the dearth primarily owing to hurdles regarding cumbersome accreditation process for receiving funds. At a local level, the government of Bangladesh has set up the Bangladesh Climate Change Trust Fund (BCCTF) and Bangladesh Climate Resilience Fund (BCRF), the former directly funded by the government while the latter by international development partners. However, implementation of these local funds has continuously been hampered by misallocation of resources, lack of transparency, and red-tape.

While Bangladesh has performed well with its mitigation efforts to tackle climate change, the country has a long way to go in terms of adaptation. In addition to accessing to appropriate funding, governance and bureaucracy are a major issue that needs to be addressed as we look to make transition. Unfortunately, Bangladesh is only a victim of climate change with much of the driving forces engendering from the developed nations over the last century. It is thus the developed countries that need to come forward with more sincere and concerted efforts to support countries like Bangladesh, or else there are risks of deaths of thousands through both traditional and non-tradition security threats.

Abdullah Ar Rafee is Senior Research Associate and Project Manager at The Institute for Policy, Advocacy, and Governance (IPAG).

e-GP -- a big leap towards digitisation

Black money and vibrancy in economy

Blockchain use in pharma supply chains