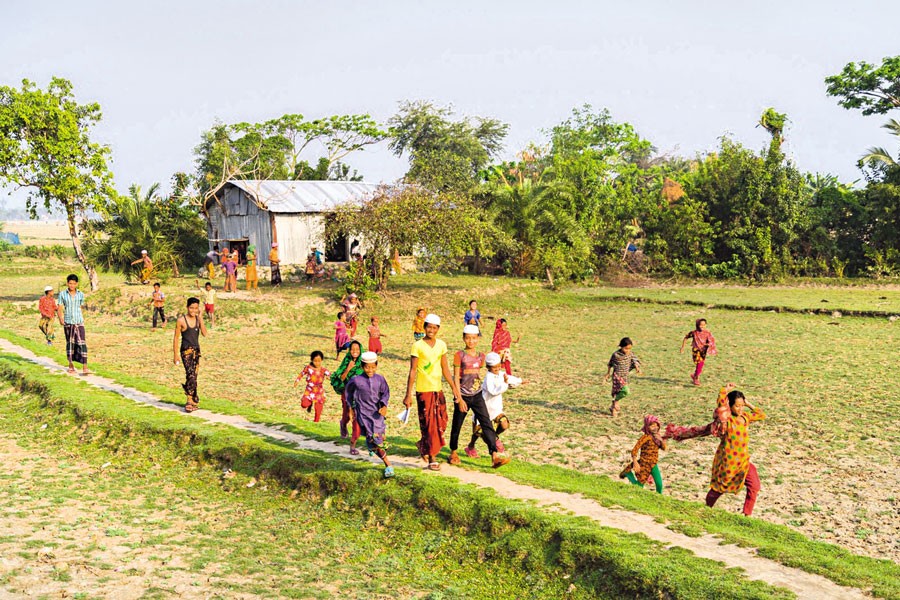 A village in Bangladesh —lostwithpurpose.com photo

The metamorphoses of idyllically sylvan places into ugly patches bereft of their earlier healthy character are common views in Bangladesh. The character of the change is more or less similar. No matter if they are in the big city suburbs, a small upazila town or in a relatively remote area in the hills, the pace and style of the change remains the same. Some take just a couple of years to offer a completely changed look. In cases, the change takes time. But in both cases, the changes are stunning. This writer has seen many such makeovers in areas near capital Dhaka and also places scattered across the country. After a recent daylong visit to a place a little over 63 kilometres from Dhaka, he was surprised to encounter the radical changes undergone by the spot in just 8 years. It is located a couple of miles away from a business hub, its main road branching out from a busy national highway. The place once comprised just a few villages. It had two markets --- one large, the other small and nondescript, and a river with sparklingly clear water. Both country and engine boats used to ply it, considered one of the Dhaka region's major rivers.

To his utter disbelief, it was the first time when this writer the other day heard the groans of the river, now in its death throes. Eight years ago when he first visited the place, the river was tempting in its look. He had travelled by an engine boat, filled with rural co-passengers, to his destination. The nearly 30-minute boat journey was really memorable. The scenic beauty of the two banks with patches of dense forests, dwellings peeping out from them, on one side, and clusters of villages in a row on the other, seemed only one of its kind. The area belongs to one of the country's few forestlands covering the greater Dhaka and Mymensingh. Only eight years have elapsed. The lush green patches filled with tall trees and bushy stretches on the riverbanks are gone. In their places, horrid spectacles are in place. They comprise brick kiln chimneys spewing out billows of smoke, stacks of new bricks and rejected chips scattered over large barren areas of the land. On the earlier visit, green paddy fields were found on both sides of the river.

This time they appeared to have vanished for good. In place of the paddy fields, shanty-like congested and unplanned huts dotted the long bank. One thing that struck the writer most was the noisy protests raised by the boat's passengers as he playfully dipped one of his wrists into the river water. On his earlier trip, he played with the cool river water during the whole trip. This time, he was told that the river's water had turned poisonous. Humans coming in contact with this water will invariably develop skin diseases. The water has deteriorated to such an extent that the villagers are reluctant to let even their cattle bathe in the river.

On hearing these words, the writer turned nostalgic. The scene of him taking baths and swimming in the river flashed across his mind. It resulted in a pall of gloom that overshadowed his mind. After getting down from the boat, he panned his eyes over the river. Lo, how the river has shrunk, with water remaining still at places! It means several shoals are set to emerge in the coming winter at those spots. Boats and cargo-laden trawlers getting stuck in the mid-river have lately become frequent. To speak forthrightly, the river is fast being avoided by the people living nearby. Instead, they prefer the 'autos', 'legunas' etc running on the 'dusty' concrete road and shuttling to and from the larger marketplace a couple of miles away. Passenger boats are rarely seen on the age-old river route.

This is how a pleasant river travel route has been made to disappear from the pages of local history. People living in the nearby villages unanimously blame the effluent discharging factories located upstream for the river's slow dying process. Once famous for its abundant fish populations, the river has long been devoid of fishes and all kinds of aquatic living organism. The small and large fishermen have moved to other cleaner rivers in the vicinity. And this river appears to be bracing for the phase of wearing the look of a fast dying flow, its water turning blackish brown, then pitch-black, and later giving off a revolting stench.

The small Ghat on the edge of the small market would once witness a weekly 'haat' filled with traders coming from far-flung areas. The much-awaited 'haat day' would bring hundreds of villagers to the venue. The market would cater to their needs for articles used in their day-to-day lives. Moreover, fancy items, cheap utensils, wooden and bamboo-made objects would draw female clients. During the day-long tour this time, none were found who could speak in detail about the present state of the market. But it was learned that everything the villagers needed was available at the larger market, which once was known especially as a ferry station.

This market, as this writer has discovered, has no difference with any city market. A decade ago, it comprised a few grocery shops, improvised restaurants, crudely built concrete outlets selling sweetmeats and local takeaways; and some wholesalers dealing in paddies.

The trading centre is now a mini-urban corner complete with sales centres offering products ranging from clothing, electronic goods etc to confectionary delicacies to their customers. The loitering youths' overall clothing outfit, haircut and the dialects tell them from their counterparts walking through the narrow alleys years ago. Beauty parlours, Chinese restaurants, fast food joints are springing up. So are residential buildings. Of late, the local affluent people do not have to rent community centres at the upazilla centres to host wedding receptions. The riverside rural marketplace, yet to be recognised as a town, now boasts of its own community centre.

In the past, hajak lamps and hurricane lanterns used to be the source of light at the market surrounded by darkness at night, and thinning forests and paddy fields in the day. On being connected to electricity supplied from the area's own power station, the fast-growing business centre remains lighted throughout the night. Darkness engulfs the area during power outages. At times it would last for hours, or even for a full day or night. The frequency of power failures has lately been cut down remarkably. Apart from the primary and junior-level schools, and kindergartens, there are a few high schools and a college in the area. A boys' high school in the river port-based trading centre is said to have crossed a hundred years since its founding. There is also a fast-rising girls' high school. Hadn't these two schools and the college been there in the locality, the future of these teenagers and the youths would be anybody's guess.

The teenage girls in most probability would have ended up being married off prematurely by their parents. The youths from humble backgrounds would presumably take up petty business or trading. Many would, as seen elsewhere, would waste away in utter despair in silence. Some might join the neighbourhood underworld or go astray. Many others might rush to Dhaka.

There are the rewards yielded by a perennially backward rural area after its joining the march of development. With its lifeline, an erstwhile vibrant river, made to die away for the sake of fortune-making by a segment of unscrupulous people, it's the collective efforts undertaken by the area's masses which have succeeded in bringing meaning to the survival of thousands of villagers. The efforts are led by the creative socio-economic navigators. They cannot save the rivers. But organising protests and devising parallel ways of a fruitful life is not out of their survival strategy.

There are hundreds of cases like this area being eroded by the agents of lust for riches and power. They have least compunction for the mortal harms they unleash on the innocent. Their thirst for a life filled with endless hedonistic pleasures appears to be unquenchable. But in an inscrutable twist of fate, it's the people's collective strength that prevails. The invisible culprits responsible for the rivers' death could once get away with their misdeeds. They blamed people's 'lack of awareness'. Those days may have been consigned to the past. People might soon start identifying them.