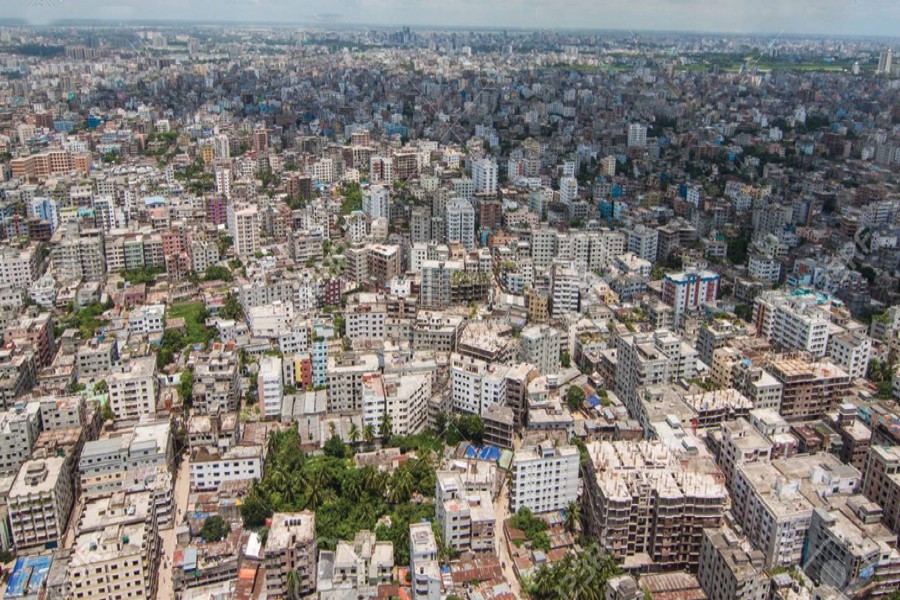 The economy of Bangladesh is now thriving with a very promising GDP (gross domestic product) growth of 8.1 per cent. After liberation and especially after 1990, development in many spheres has been expedited. The housing sector is considered as an extensive and progressive sector as it fills one of the most significant basic needs - shelter. In recent years, developments in infrastructural sector, especially construction of industrial buildings, corporate offices, dwelling houses, roads etc., have increased significantly.

The housing sector plays an important role in attaining economic stability. This sector contributes 7.4 per cent in GDP, which is Tk 14.15 billion in numeric value. According to  Article 15 of the Constitution, the provision of the basic necessities of life, including shelter, is a fundamental responsibility of the state to attain. Projection from last population census says that the total housing demand will be 0.8 million units in 2020 and 1.14 million units in 2030.

The number of urban dwelling people is almost 35 per cent of the total population now, which is increasing gradually. But the growth of housing sector in the last three years is only 6.0-7.5 per cent. Almost everyone dreams for his/her own house and puts his/her lifetime endeavour for owning a proper shelter. To meet this basic demand there are some state-owned and private institutions, which are involved in home construction, home loan and allotment of plots and flats.

In the construction of houses, the real-estate developer companies are directly involved. There were only 10 developer companies in 1980s; their number has now increased to about 2000, and of them 1006 companies are registered member of the Real Estate and Housing Association of Bangladesh (REHAB). However, only 10-15 companies hold 90 per cent share of the real-estate market and their operation is confined only in Dhaka and Chattogram city areas. Besides, almost all state-owned and private commercial banks, Bangladesh House Building Finance Corporation (BHBFC), some private financial institutions and non-governmental institutions (NGOs) are financing home construction, flat purchases and commercial building construction.

According to Bangladesh Bank, the housing finance demand in fiscal year 2019-20 is Tk 1496 billion, which will be Tk 1544 billion next year. Against this growing demand, the total outstanding home loan in 2017-18 fiscal year was TK 815.2 billion, where private commercial banks hold 58.4 per cent contribution. There are also two specialised institutions only for housing finance: the state-owned Bangladesh House Building Finance Corporation (BHBFC) and private sector Delta Brac Housing Finance Corporation Ltd.

There are many significant differences in the operational procedures of the state-owned and private organisations. For starters, private entities usually target the upper class and upper-middle class customers for financing home construction and flat purchase. The low and lower-middle class do not even get 1.0 per cent of the housing financing benefit. In that situation, as a beacon of hope, the state-owned banks and BHBFC provide home loan facilities in zila sadar, upazila sadar, peri-urban and growth centres all over the country.

Before the liberation of the country, the House Building Finance Corporation was established to provide housing facilities for the low and lower-middle income group. With limited capital, BHBFC is still trying to provide housing loan facilities for every class of people with the motto "Housing for all". The private commercial banks and financial institutions are not interested to invest outside city corporation areas. But BHBFC has dispersed its loan activities in upazilas and to limited income groups with the highest ceiling of Tk 10 million, lowest 7.0 per cent rate of interest and a maximum repayment period of 25 years.

As housing financing is playing a major role in the country's economic growth, it is important to resolve some impediments the sector is faced with. People are rushing to city areas and it causes price hike of liveable lands, construction materials and ready flats. There is unbridled corruption in land and housing offices due mainly to weak regulations and absence of overseeing. Land prices are not ascertained and owner of real-state agencies are trading in an unregulated system.

Public harassment in almost every step is another malady in this sector. Chances of falling victim to fraudulent practices are always there in purchasing land, registration and mutation.

Ordinary people have no clear idea about home loan procedures. Some visible problems like high interest rate, complexity in documentation and mortgage system in granting loans make this sector rather inaccessible to the ordinary customers. Added to these are non-cooperation from home loan providers, lack of compliance between housing finance institutions and property owners. The subregistry office is another pain in the neck for ordinary public as it is a hotbed of corruption. Alongside reducing corruption, interest rate, registration fees, processing fees, housing policies and regulations should be revised under government's strict monitoring.

Although commercial banks and financial institutions are investing in the housing sector, there is the need for public-private partnership (PPP) to gear up the sector as well as build trust among the potential and prospective clients.