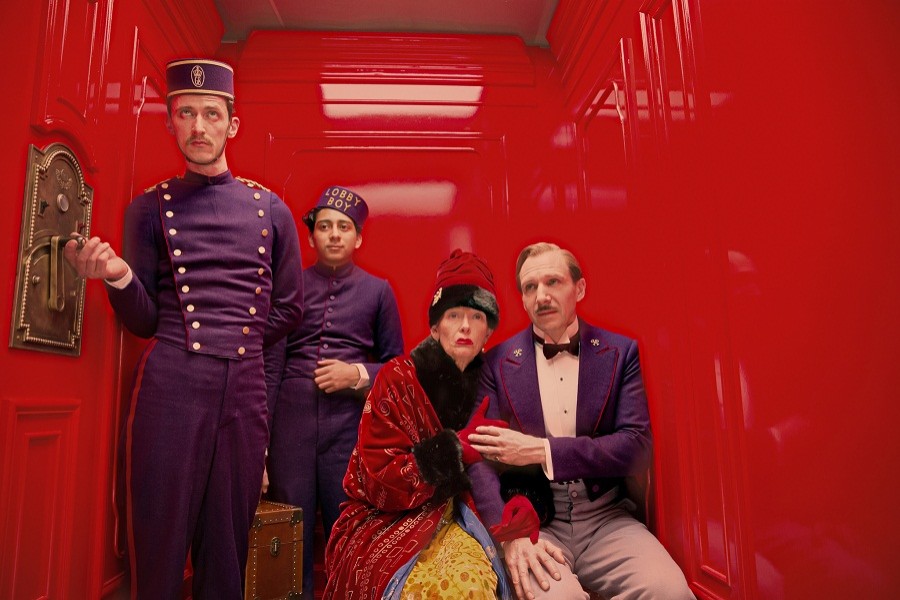 Wes Anderson is known for his comedy-drama films with aesthetic visuals and a penchant for capturing his characters on camera symmetrically.

In his eighth film ‘The Grand Budapest Hotel,’ he leaves no stone unturned to direct the movie in his most Wes Anderson-esque way – artistic visuals with amazing comedic timing and beautiful cinematography.

The movie is narrated by an unnamed author who visited the titled hotel in 1968. There he met the hotel owner in a fictional country Zubrowka who tells his story of being rich from the dirt poor situation in his youth.

Owner Zero Mustafa was an immigrant working as the staff for the hotel hired by the concierge Gustave. Gustave had quite a notoriety for seducing old wealthy clients who stayed at the hotel. His life takes a turn when he was framed for the murder of his long-time lover.

Gustave establishes a master-protégé relationship with Zero after being saved by him and his lover Agatha.

He goes on a journey to prove his innocence and claim the renaissance-era painting ‘Boy with Apple,’ which now-deceased lover Madame D. willed for him.

After many encounters and chases by D.’s son Dimitri, his hired assassin, and the Zubrowkan troops, Gustave finally manages to secure the painting and makes himself wealthy.

But the story has no happy ending, as Gustave gets killed in a train in front of a newly-wed Zero and Agatha by fascist Zubrowkan soldiers.

‘The Grand Budapest Hotel’ is a story of a man on an adventure with his protégé to achieve redemption and reclaim his wealth. Wes Anderson tells this story with perfect comedic timing, aesthetically pleasing cinematography, and clever use of colours.

Zubrowka witnesses change by the influence of fascism, but the characters inside the hotel never seem to be disturbed by it. Anderson carefully avoids the similarities with the real world scenario and merely symbolises the Zubrowkan fascists in the movie as the real counterparts.

Many scenes like the chasing of Gustave by his adversaries, the skiing scene of Gustave-Zero duo chasing Dimitri’s hired assassin Jopling etc. may seem cartoonish at first.

Yet, the film gets its fair share of adult themes of profanity, mainly used as comedic elements which make the film more entertaining.

The film has a star-studded cast, including Ralph Fiennes, Adrien Brody, Willem Dafoe, Tilda Swinton, Edward Norton, Jude Law, and so on.

The portrayal of Gustave and Zero by Fiennes and Tony Revolori makes the perfect Master-Protégé duo on screen.

The Grand Budapest Hotel won many accolades deservedly, including winning the Oscars in four categories from several nominations, mainly for its creativity and original score.

Keeping aside all the comedy and plot twists, this film outshines all Wes Anderson films in terms of eye-pleasing cinematics and frames.

At times, the screen might seem to be a large canvas with a mesmerising beautiful picture drawn on it. The characters feel far from reality but closer to fictional jolly souls which intrigues the viewers even more into the film.

Such is the magic of the Grand Budapest Hotel that this film is celebrated in February, the month of the film’s original release in 2014, every year by the fans across social media platforms.