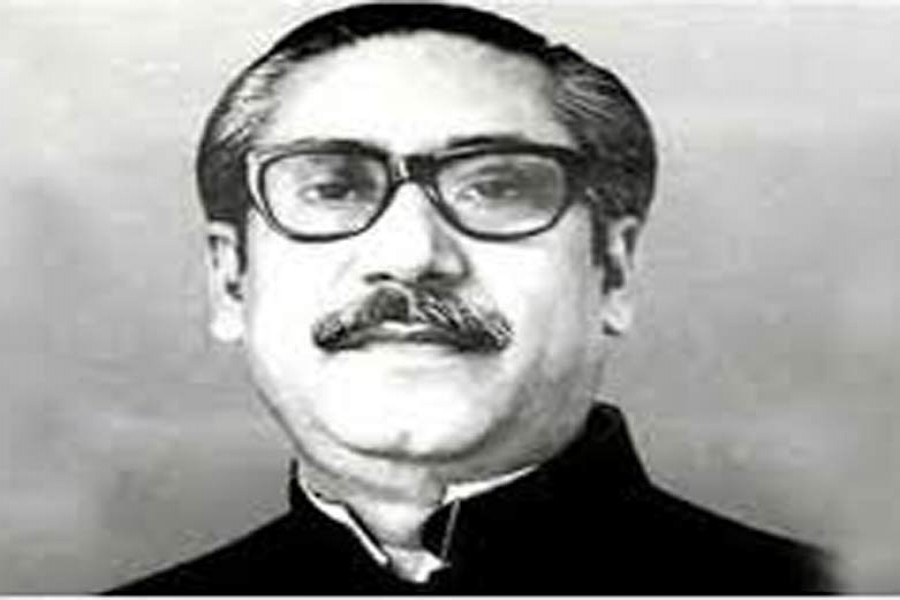 BANGABANDHU SHEIKH MUJIBUR RAHMAN: "Only a peaceful environment can enable us to enjoy the fruits of the hard-earned national independence and gather all our strength and resources to fight poverty, hunger, disease, illiteracy and unemployment."

Bangabandhu Sheikh Mujibur Rahman, released from his internment in Pakistan on January 08, 1972, eventually returned to Dhaka, the capital of independent Bangladesh amidst a rapturous welcome on  January 10. On the way he stopped over in London and New Delhi. The return of Father of the Nation completed our struggle for independence.

I recall the historic role that he played as the master helmsman during 1972 and subsequently over the next three years. It was his commitment and his vision that enabled him to safely guide our ship through troubled waters amidst a devastated post-war scenario. It was his significant contribution that facilitated our growth towards democracy and institution building.

He believed in nationalism, democracy, secularism and socialism. He felt that these principles were required for the good of the common man. Bangabandhu was also a firm believer in the rich cultural and literary heritage of Bangladesh and for him that was the springboard of the Bangalee ethos, its tradition and its nationalism. That instilled in him the pride of being a Bangalee living in Sonar Bangla.

Dedicated and committed to the cause of Bangladesh, he encapsulated his vision for his new country at Palam Airport, New Delhi on January 10, 1972. He described his journey to a free Bangladesh as 'a journey from darkness to light, from captivity to freedom, from desolation to hope'. He also reiterated that he was going back to his independent country 'not with hatred in my heart for anyone, but with the satisfaction that truth has at last triumphed over falsehood, sanity over insanity, courage over cowardice, justice over injustice and good over ill'.

Bangabandhu after his return to Dhaka, openly thanked India for its past assistance and then requested that country to withdraw all its troops from Bangladesh. This was complied with soon enough [addressing a mammoth public meeting along with Bangabandhu at Suhrawardy Uddyan on March 17, 1972, Indian Prime Minister Indira Gandhi announced the decision to withdraw Indian troops from Bangladesh]  and belied claims by the then Pakistani leadership that Bangladesh was going to remain as an Indian colony.

Bangabandhu's magnanimity and belief in the people of Bangladesh was reflected in his optimism. It was also this spirit that would inspire him to face up to the many difficulties that he would have to overcome in the coming months - arranging relief and rehabilitation for the more than ten million Bangladeshis who had sought refuge in India during the war in 1971, restoring economic activity, infrastructural connectivity, agricultural process, educational institutional facilities and healthcare. It was a daunting task but was handled efficiently by Bangabandhu and his team in cooperation with the United Nations.

A statesman and gifted orator, Bangabandhu in his speech on  January 10, 1972 at Suhrawardy Uddyan was masterly in his advice for the victorious people of Bangladesh. At this first opportunity, he warned that none should 'raise' their 'hands to strike against non-Bangalees'. At the same time, he displayed his concern for the safety of the 'four hundred thousand Bangalees stranded in Pakistan'. There was a nuanced connotation in his approach to the problem. This eventually assisted in the safe repatriation to Bangladesh of the unfortunate Bangalees who were stranded in different internment camps in Pakistan.

While re-affirming that he harbored no 'ill-will' for the Pakistanis, he also pointed out that 'those who have unjustly killed our people and assisted in this crime will surely be tried'. Later, on April 17, 1973, after the completion of investigations into the crimes committed by the Pakistan occupation forces and their auxiliaries, it was decided to try 195 persons for serious crimes, which included genocide, war crimes, breach of Article 3 of the Geneva Conventions, murder, rape and arson. It was also decided that the trials of such persons and others associated in planning and executing such crimes would be held in accordance with universally recognised judicial norms. This argument and the related judicial process were to be central till Bangabandhu's murder in August 1975. Unfortunately, his death also resulted in the setting aside of the entire judicial process. Fortunately, under the leadership of Prime Minister Sheikh Hasina the trial process has been activated and is being completed. We owed it to the millions who lost family members and the tens of thousands of women who were molested.

Subsequently, Bangabandhu did not hesitate to exhibit his and Bangladesh's closeness and support for Islam, Arab countries and the OIC (Organisation of Islamic Cooperation) during the 1973 war between Egypt and Israel. His personal initiative resulted in the dispatch of a Bangladeshi Army Medical team and cartons of Bangladeshi tea for Egypt and Syria. This was greatly appreciated by members of the OIC and resulted in Bangladesh being invited to be a member of the OIC during its Summit meeting in Lahore, Pakistan in February, 1974.

Bangabandhu believed strongly in the sovereign equality of all nations and laid particular stress on the promotion of close cooperation with India in the fields of development and trade "on the basis of equality and mutual benefit". He also believed in development and utilisation of resources 'for the benefit of the people of the region'. It was this approach that led him eventually to persuade India to agree to the establishment of a Joint Rivers Commission on a permanent basis comprising of experts of Bangladesh and India 'to carry out a comprehensive survey of the rivers systems shared by the two countries and to formulate projects concerning both the countries in the fields of flood control and then to implement them'. In the Joint Declaration of the Prime Ministers of Bangladesh and India on  March 19, 1972 at Dhaka, there was also a reference to examining the feasibility of linking the power grids of Bangladesh with the adjoining areas of India. That is being achieved now. Today, 47 years later, under our current Prime Minister, we are evolving the necessary dynamics for a regional energy grid and regional water management for South Asia. Such a process is consistent with Bangabandhu's vision of so many decades ago.

Consistent with this principle of brotherly relations, Bangabandhu signed the historic "Land Boundary Agreement (LBA)" with the then Indian premier Indira Gandhi on May 16 in 1974 to settle the land boundary dispute between the neighbours. Bangladesh quickly ratified the agreement that year but India failed to do so. Indian Parliament however took 41 years to subsequently unanimously pass the LBA on May 07, 2015 - thanks to the persuasion of Sheikh Hasina.

Similarly, Bangabandhu enacted "The Territorial Waters and Maritime Zones Act" to establish Bangladesh's sovereign rights in the sea. The law was framed in 1974 when there was no such law in most of the countries in the world. Nearly eight years after the enactment of "The Territorial Waters and Maritime Zones Act" by Bangabandhu, the United Nations (UN) framed "The UN Convention on the Law of the Sea (UNCLOS)" in 1982.

This has been recently reflected in Prime Minister Sheikh Hasina not only being acknowledged as a significant world leader but also being accorded the title of "Mother of Humanity". Like Bangabandhu, who was conferred with the "Joliot Curie Award" in 1973, she has also received recognition through numerous awards bestowed on her by international agencies for her government's socio-economic achievements that has helped to reduce poverty, create higher functional literacy, better health care, induce gender empowerment and facilitate accountability, so important for good governance, through the Right to Information Act. Her efforts through digitalisation, mobile phone technology and use of renewable energy have also enabled Bangladesh to achieve a high growth rate and meet the required Millennium Development Goal (MDG) targets. We are now also on the way towards meeting the requirements pertaining to Sustainable Development Goal (SDG) goals.

Through these achievements, during this important year 2020, when we are observing the special centennial anniversary of the birth of Bangabandhu, Sheikh Hasina has proven that Bangabandhu was correct when he stated: "Only a peaceful environment can enable us to enjoy the fruits of the hard-earned national independence and gather all our strength and resources to fight poverty, hunger, disease, illiteracy and unemployment."