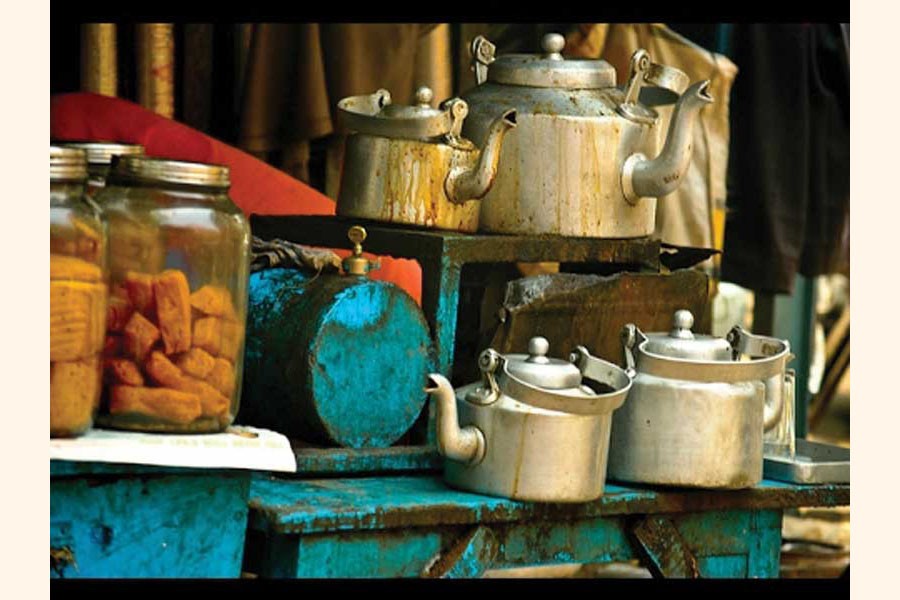 It is 7pm. 45-year-old Masud, a senior who is thriving in his field of work, is fiercely typing away at his workstation, in dire anticipation of the promotion he has been pining for. Next to him is a plate of oil-drenched mughlai parathas that he and his colleagues devour a few times a week to keep them through this strenuous deadline chase. The only movement he gets throughout the day is when he goes out with his colleagues for a cigarette break, complemented by a saccharine sweet cup of tea. Despite his doctor telling him that he needs to incorporate at least 30 minutes of walking in his daily schedule, he has otherwise been sitting at his workstation the entire day and is anticipated to sit through two more hours of rush hour traffic, a commonplace struggle amongst the people of Dhaka, Bangladesh. He has been diagnosed with Type II diabetes and hypertension but he has not been getting time to visit the diagnostic center for a follow-up. Since he is able to perform well in his office and lead a healthy life with his family, he does not feel the need to seek healthcare.

As a lower-middle income country (LMIC), when we think about health issues in Bangladesh, we are often quick to limit ourselves to the lens of infectious diseases. We think about dengue, tuberculosis, diarrhea, and other "diseases of the poor". And then there are those diseases that cannot be transmitted from person to person. The diseases that are slowly creeping into people's lives. The diseases that do not discriminate against any socio-demographic group, they could affect anyone from the biggest business tycoon in your neighborhood to the tong er cha mama at the tea stall outside your office. Diabetes, hypertension, COPD, cardiovascular disease - collectively known as non-communicable diseases (NCD) - are now occupying the forefront of the causes of mortalities and morbidities in Bangladesh.

A global study jointly conducted by the Institute for Health Matrix and Evaluation of the University of Washington reported that smoking, high blood pressure, and increase of blood sugar were among the top five leading causes of death in Bangladesh, as of 2017. There is no paucity of research about NCDs in Bangladesh nor is there a dearth of government-led initiatives to tackle NCDs. In fact, the Government of Bangladesh has launched the WHO-PEN protocol for early case detection and management of NCDs. There is, however, a scarcity of awareness and risk perception of NCDs among the people of this busy, competitive, and challenging city. What you know can't hurt you right? Even though, in reality, it is hurting you inside.

According to data from recently published scientific articles, programmatic report and national health data, there is a low reported uptake of healthcare for NCDs from public healthcare facilities and other healthcare pathways. Research has also suggested, however, that patterns of low healthcare uptake resonated in other LMICs in the Asia-Pacific region, such as Mongolia and Nepal. These numbers are alarming, considering the growing burden of NCDs. A study of 52 countries revealed that the study participants in South Asia suffered from their first attack at an average age of six years younger compared to the rest of the world. According to this study, the most significant risk factors were diabetes and high cholesterol and low levels of physical activity. This information seems to make complete sense considering our culture of devouring syrupy sweet roshogollas and those shingaras and puris that have been deep fried in mounts of recycled oil. We can also top that off with the lack of physical exercise thanks to our traffic-ridden, technologically-driven culture, with literally very little room for pedestrians.

Like Masud, many other people living in the city carry on the burden of at least one NCD without actively taking steps to lower that burden. Masud could substitute those mughlai parathas for some fruit or consider quitting smoking, but he and many other people have become entrapped in a cycle of unhealthy lifestyle habits. The more damaging part is that they often tend to overlook the long-term health implications of their habits, and hence, do not feel the need to seek healthcare. Masud does not feel weak, he is able to play with his children and even though his doctor instructed him to regularly get his blood tested and schedule a follow up appointment, he perceives these endeavours as a waste of his valuable time. Similarly, seeking healthcare and visiting the doctor is not really a regular ritual that people in this country follow, especially it was not something we were accustomed to doing for several generations.

Although there is no one-size-fits-all formula, let's see what our forefathers from several generations ago did whenever they got sick. They would probably get advice from their trusted family members, especially their ancestors, or seek help either from the local pharmacy or traditional healers in the community. Of course, this scenario evolves over generations, as small community clinics, upazila health complexes and general doctors take more of a role in providing healthcare to the general public. Meanwhile, while people become more educated and informed, people start to realize the importance of safeguarding their own health. Although, not in its entirety. Because you have still got educated civilians like Masud. He is no doubt an intelligent bloke, and he is very well aware of his health condition. He even knows what he has to do in order to keep his health in check. However, despite the progression in healthcare-related awareness, the adamancy of not seeking healthcare still persists across generations. People may not respond to treating an NCD the same way they would approach a stubborn fever, persistent food poisoning or any other health condition that interferes with their wellbeing on a day-to-day basis. But that does not make it any less of a concern.

So what can we conclude from this? The number of healthcare facilities can increase, the scope for diagnosing NCDs can also become more accessible, people's awareness about NCDs can increase, the government can launch more initiatives to improve NCDs - but none of these initiatives will work if the individual is not prepared to take ownership over his or her own health. Now let us imagine an alternate reality where Masud spares time out of his schedule to take a test and visit the doctor. He finds out that his sugar and cholesterol levels have increased. His doctor places him on a strict regime where he eats healthier food and walks at least 3 to 4 times a week. And the end result? His test results have improved, he has more energy to play with his children, and he has been able to secure that promotion he was pining for because he had more energy to work. It may be one little step in this bigger quest called life, but a very important one indeed. It is the step that opens the door to a better life.

Samira Dishti Irfan is currently working as a Senior Research Officer in the Infectious Diseases Division of International Centre for Diarrhoeal Diseases, Research, Bangladesh (icddr,b). She attained her Bachelor's degree in Integrative Biology from University of California, Berkeley and her Master's in Public Health (MPH) from North South University.

e-GP -- a big leap towards digitisation

Black money and vibrancy in economy

Blockchain use in pharma supply chains