Jasim Uddin, folk poet with awareness of his time 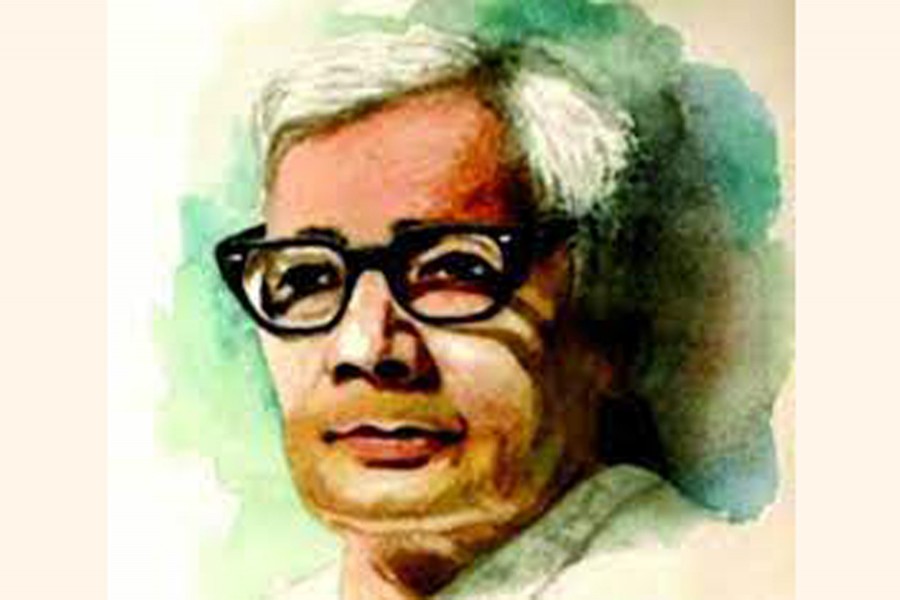 The 4-time Pulitzer Prize winner Robert Frost, the American poet, had been known throughout his career as a major poet of the 20th century. The subject of his poetry used to move round the pastoral, particularly rural, America and its plain people and their surroundings. In spite of his being chiefly confined to the villages enveloped in nature, agricultural farms and farmers, Robert Frost had never been given the honorific title of a 'poet of villages', or a 'poet of nature'. It was because like every genuine poet, he never evaded the agonies of modern life, its alienation as well as its dichotomies.

The similar observations apply to Jasim Uddin (1903-1976), popularly known as 'Polli Kobi', or a rural or folk bard of Bengal. The title was a popular expression of love. The poet passed away in Dhaka on March 14 in 1976. There are potent reasons for the folk identity of the poet. The poet himself had never objected to the title of the 'Polli Kobi'. It was because he was born a pure rural man. As he grew from childhood to his adolescence, the budding poet found himself being nursed by the innocence of rural nature and the accompanying environs. In this regard, Jasim Uddin bore striking resemblance with Rabindranath Tagore, who had been in the midst of nature since his teenage times. Unlike Rabindranath, the Polli Kobi established a lifelong bond with the typical features of Bengal, especially that of East Bengal.

Rabindranath fell in love with the mighty Padma. Its lush green villages along its banks, and the poor rural folks living there close to paddy fields and the sun-burnt farmers --- everything fascinated him. The poet had the eyes of a 'zeminder' who was virtually in charge of ensuring the villagers' wellbeing as a person given the task of collecting British government-imposed taxes from his mostly poverty-stricken people. Due to his being from the class of the Bengal nobility, Tagore had appeared to be averse to his purely mundane job. But it was not so. He loved villages and their people. Jasim Uddin was from a rural well-to-do familial background. He had his schooling at his rural school, passed his secondary examinations and enrolled on the nearby small-town college. All this occurred in the then Faridpur. The poet hails from this district. Tagore was born and brought up at the Jorasanko 'Thakur Bari' in the heart of Kolkata city. He had been purely urban till his death, barring a considerable part of his life passed in Shantiniketan, a school modelled after the ancient India's forest hermitage. It eventually became a learning centre under shade trees, and amid sylvan peace.

Tagore founded Shantiniketan at the age of 40. Yet Tagore couldn't avoid being beckoned by the rural beauty of East Bengal. The poet had by then emerged as a brilliant poet in Bangla literature. Like Tagore, Jasim Uddin attracted readers quite early in his life. The inclusion in the school-level Bangla textbook of his popular poem 'Kobor' (Grave), written and published in his early youth, made him a well-known poet overnight. But the poet chose to remain attached to the folk theme and ballad form for his popular long poems. Those included 'Sojon Badiar Ghat', 'Nakshi Kathar Math', 'Beder Meye' etc which created a permanent place for him in Bangla literature. The wide popularity of his plays and their open-air performances for the rural folks made him a living legend of sorts as he reached his late youth. By that time the Polli Kobi had completed his Masters in Bangla at Calcutta University in 1931. Earlier, he received his BA from the same university in 1929. He passed IA from Rajendra College, Faridpur, in 1924.

Jasim Uddin did not write for the urban elite readers. His aim was reaching the large rural audiences throughout the undivided Bengal. He didn't fail in his mission. In a few years after he had engaged himself in fulltime writing, the Benglalee folk poet was on his way to attaining the status of a living legend. He didn't fail to receive the attention of the time's great folklorists. The poet worked as an assistant research fellow under the famed Bengalee folklorist Dineshchandra Sen. After the sale of the copies of his plays, poetry collections and records of his songs (as lyricist) in hundreds and thousands, Jasim Uddin attained a cult status of sorts in both Bengal. Besides writing poems and ballads, the bard in his mid-youth had begun composing folk songs for great singers like Abbas Uddin et al. At the same time, he developed a passion for discovering the Bangla lyrics lost in the abyss of time. The folk poet is credited with retrieving hundreds of songs from being lost once and for all.

Poet Jasim Uddin despite being involved in creative writings was also a tireless researcher. As is natural, his field was folklore. Besides folk pieces, the poet dealt with assorted types of literature. He wrote fairy tales for juvenile readers; and also won the hearts of scores of readers with his 'Bangalir Hashir Golpo'. The book is the compilation of a number of age-old humorous tales long in circulation in Bengal. While editing the stories, the poet kept the style and theme intact. He just retold the tales in a smart form.

One of the Polli Kobi's most remarkable books was 'Thakur Barir Anginay', an intimate and inside portrayal of the paternal residence of Rabindranath Tagore. The book portrays the characters of Tagore's father Debendranath Tagore, Tagore's brothers & sisters, the uncles, the nephews and nieces and the numerous visitors to the proverbially famous house. The extent of respect, love and awe Jasim Uddin had for the house could be found in detail in this book. Tagore used to reside in Thakur Bari while he was a student in Calcutta.

The folk bard rejected the Bangla Academy Literary Award for poetry. He thought it was a belated recognition of his works on the Academy's part. However, in the following years he was honoured with the Ekushey Padak and Swadhinata Puroskar. Earlier, in 1969, he received De-Lit from the Rabindrabharati University in West Bengal. The poet was also awarded the Unesco Award in 1976. The then Pakistan Government honoured him with the award titled President's Pride of Performance in 1958. Jasim Uddin and Bangabandhu had long been close friends. Few people know about how the relations began and developed between the popular folk poet and the great leader and founder of the independent Bangladesh. They, however, had one thing in common. Both of them were from the then greater Faridpur district.

In 1974, Bangabandhu was invited to inaugurate the Ekushey programmes of Bangla Academy. Bangabandhu accepted the invitation, but on condition 'his friend' Polli Kobi Jasim Uddin also be invited on the dais at the ceremony. On that very day, the folk poet and the Father of the Nation were seen sitting on the dais together along with the guest-writers invited from Kolkata.

Since his youth, Polli Kobi Jasim Uddin had been attracted to the ideology of a discrimination-free egalitarian society. Many would love to call Jasim Uddin a poet of progressive thoughts and dream. He was free of all kinds of orthodoxies.  Along with the other Bengalee litterateurs and intellectuals, the poet stood up against the slapping of a ban by the Pakistani rulers on Tagore's Songs in the 1960s. Being the only successful folk poet in Bengal, he can be compared with many traditional rural bards with talent elsewhere in the world. But Jasim Uddin did not follow a linear, narrative style in his works. By the time the poet was at the zenith of his fame, the modernist trends had started influencing Bangla poetry. Jasim Uddin was fully aware of it. In line with this, like Robert Frost, he began interspersing modernist features in his later poems.  These attempts at adding a new diction to the outward folk narrative did not escape the critics' notice.