India opts out RCEP, marches to its own tune 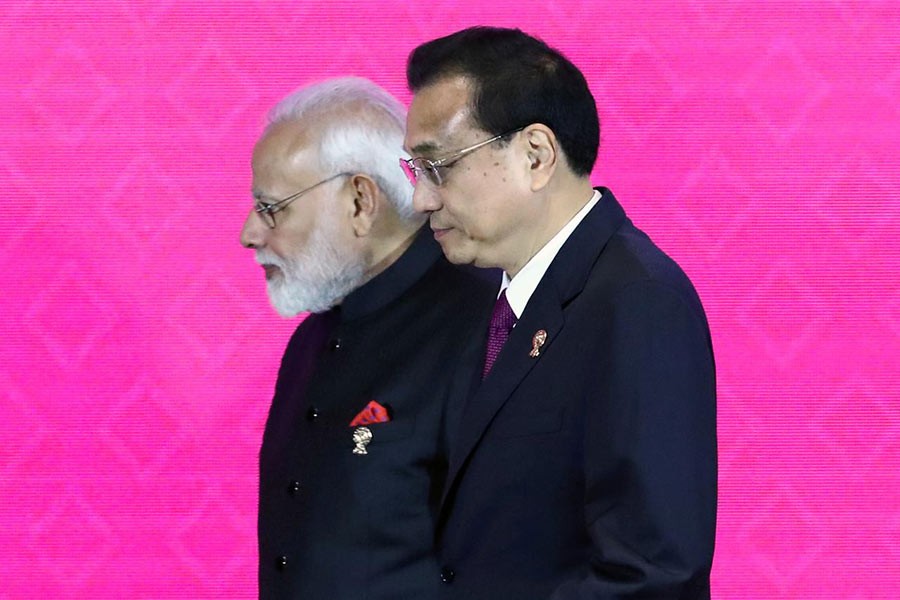 The Summit of the world's largest proposed free trade agreement, the Regional Comprehensive Economic Partnership (RCEP) was held in Bangkok on November 04. RCEP comprises 16 Asian nations which include 10 ASEAN (Association of Southeast Asian Nations) countries plus Australia, China, India, Japan, South Korea and New Zealand. India balked at signing the deal at the last moment but all the rest 15 countries decided to go ahead.  India has apparently taken a delaying tactics.

RCEP negotiations were launched in 2012 and took seven years of gruelling negotiations to take a final shape in 2019 at the Bangkok summit. During this period India negotiated hard, even extracted some concessions, in particular with regard to its agriculture sector. Trade ministers who met in advance of the arrival of their leaders were clearly frustrated for India literally putting cold water on any prospect to conclude the full deal at the Summit. Some argue that it was merely a hardball negotiating tactics of India to extract fresh concessions and sign up next year when the final RCEP deal will be signed and sealed.

OPEN TRADE AND INVESTMENT ENVIRONMENT: The statement at the conclusion of the Summit declared that 15 RCEP participating countries had concluded their negotiations which demonstrated their commitment to an open trade and investment environment across the region. The fine details on market access will be worked out by February, 2020 and the final deal completed by the end of the year in Vietnam.

However, there was a general consensus to keep the door open for India to join the group at a later date if the country wishes to do so. China announced that India was welcome to join when it is ready.  Joko Widodo, the Indonesian President, urged to exercise patience with India and not to proceed with any arrangement that would exclude India. But all that depends on how satisfactorily can be resolved the "significant outstanding issues'' that India has raised.

The RCEP deal as it stands now is a very traditional free trade deal as one can find in any economics text-book. The deal primarily focuses on tariff cuts in tradable goods but does not include services and also contemporary trade-related issues such as labour and environmental standards. RCEP is expected to stimulate not only trade in goods but also further strengthen regional supply chains which again will further add to stimulating trade in goods. This is happening at a time when global economic growth is threatened by the US-China trade war and growing threats of trade protectionism is on the rise.

President Donald Trump's initiatives to dismantle or to make inoperative all multilateral institutions including the World Trade Organisation (WTO) have caused further slowdown in trade and investment flows across the globe. In such a pessimistic global economic environment, the Asia Development Bank has made a forecast that RCEP would contribute USD$260 billion in global income. In fact, the rising economic nationalism in the US and its trade war with China has created heightened interest in the RCEP deal throughout the region.

POLITICAL PRESSURE ON MODI: The Modi government has been under intense pressure not only from affiliates of the Rastriya Swayamsevak Sangh (RSS), the Hindu militant supremacist organisation which espouses the Hindutva ideology to turn India into a Hindu state but also from  the secular opposition Congress party, which is now almost a moribund political party, to stay away from RCEP. India's decision not to join RCEP has come at a time when there is growing concern about the state of its economy.

The strong opposition to the proposed deal came from Swadeshi Jagran Manch (SJM) and Bhartiya Kishan Sangh (BKS), the two affiliates of the RSS. The RSS as a Hindu supremacist fascist organisation is in the same league  with other fascist organisations like Spain's Falange, Ukraine's neo-Nazi Azov Battalion, and Ustasha in Croatia. Also, the opposition Congress party's dynastic leader Rahul Gandhi tweeted on Monday, November 04, that it (RCEP) would "flood India with cheap goods, resulting in millions of job losses''.

MODI SIMPLY BLINKS: Shrewd self-promotion using bigoted political rhetoric has enabled Modi to arouse strong passion and attracted a very large following but he is apparently incapable to grasp the economic challenges India faces from both within and without.  When faced with challenges to his policy decisions, especially if they come from the RSS or its affiliates, Modi simply blinks.

The BJP is caught in quite contradictory objectives. It has to juggle between achieving sustained economic growth and expanding and sustaining its political control across the country. Most often the latter overwhelms the other. That's where Modi's capitulation most often comes from. But to be fair to Modi, historically there has been very little support for free trade in India since the days of Nehru, rather the country's elite has a great liking for what is called the "Licence and Permit  Raj'' by creating an economic fortress India.

INDIA'S WORRIES: The official reason given to opt out of RCEP was that India's key concerns surrounding the agriculture and manufacturing sectors were not satisfactorily addressed. India is deeply concerned that its market could be flooded with Chinese goods and also agricultural and dairy products from Australia and New Zealand. India ran a US$58-billion trade deficit with China in 2018. India claims it is  now a "service economy" but trade in services is a very minor part of the RECP deal. Services trade is, however, a very different ball game from that of merchandise trade. Trade barriers in services are regulatory barriers, even the WTO could not yet resolve the issues satisfactory. Services trade requires harmonisation of rules and regulations across a large number of countries which at a regional or multilateral level can be a very difficult task.  Even what has been agreed at the Bangkok Summit on services trade is not acceptable to India.

More importantly, India despite its much-vaunted ambition to become a global manufacturing powerhouse, has gone nowhere. The manufacturing sector is massively uncompetitive and also not plugged into global supply chains. In fact, tariffs on manufactures are rising and that will make more difficult for the country to be part of any long supply chains. India is the sixth largest producer of manufactured goods in the world but accounts for only 3.0 per cent of global manufacturing output. It does not excel in any of those manufactured products. It always underperforms in manufacturing. Lack of infrastructure and massive regulatory burden stands in the way of achieving efficiency. Indian manufacturing is in reality struggling, its auto industry is now faced with serious crisis.

Manufacturing as a share of India's GDP (gross domestic product) has declined to 23 per cent while services sector has gone up to 62 per cent in 2018.  But the agriculture sector employs 44 per cent of the labour force compared to 31 per cent in the services sector. India's current high growth performance is largely attributed to the growth of the services sector. In fact, some are arguing that the country moving from the agrarian stage has leapfrogged the manufacturing stage into a services-oriented economy. That obviously implies India has become a post-Industrial economy but many are not very convinced about that given the level of extreme poverty that exists in India. And more worryingly India's exports have remained stagnant at the 2011 level.

US STANCE: RCEP is viewed in Washington as another attempt by China to undermine US hegemony in the region though its close allies like Australia and Japan have joined the pact.

A view is now emerging that India, a US strategic ally against China, sought to stymie the regional initiative by refusing to accept the RCEP deal. The basis of such a view is supported by an opinion piece published in Bloomberg where it said that the US was gratified by India's stance as it would undermine the RCEP.

INDIA VS CHINA: India has always cherished a global role for itself since the time from Jawaharlal Nehru. It now sees itself as the credible challenger to rising China because of its geographic size and population. India has readily accepted the role as a franchisee of the US to perform this role in the region. India has increased its diplomatic engagement with South East Asian countries to safeguard its strategic interests despite its awful limitations. It is fearful that RCEP will further create economic imbalance between India and China which will work against its economic interests in the South East Asia region.  Also, that would affect India's standing against China as the competitor.

Why India wants to be a competitor of China instead of co-operating with it is a real mystery. India simply does not have the economic strength and political and social cohesion for this purpose. India's economy is big but China's economy is five times bigger than that of India. The Economist points out China is still adding equivalent of a quarter of India's economy every year. But India will definitely overtake China by 2035 as the most populous country on earth. India as a country has the scale in terms of its geographic size and population to match China, but it will never be the next China.

Two-thirds of world's poor live in India who earn US$1.5 or less a day. With a per capita income of US$2,172 (2019), India is in the 142nd position among 186 nations.  India ranks 102 out of 117 countries in the Global Hunger Index (GHI), 2019 putting the country below its South Asian neighbours like Pakistan (94), Bangladesh (88), Nepal (73) and Sri Lanka (66) with a score of 30.3 which is considered as serious. About 5000 children die of hunger and malnutrition every day.  It has the largest number of illiterate people in the world. The country's level of hygiene and sanitation can be gauged from the fact that 53 per cent of the population have no toilet, not  to speak of other hygiene and sanitation indicators. Politically India remains fractured in parts of the country as exemplified now in Kashmir and many other parts of the country and socially fragmented by the deep-rooted caste system which stigmatises, humiliates and brutalises lowest castes including Dalits. Yet, India marches to its own tune quite oblivious of these realities and its ambition to be a global player is a part of that tune. Any attempt to compare India with China will only stand in the way to our understanding of the nature and scope of India as a state and its economy.

In love with 'adda': Delight and dread

Digitalisation no guarantee against graft