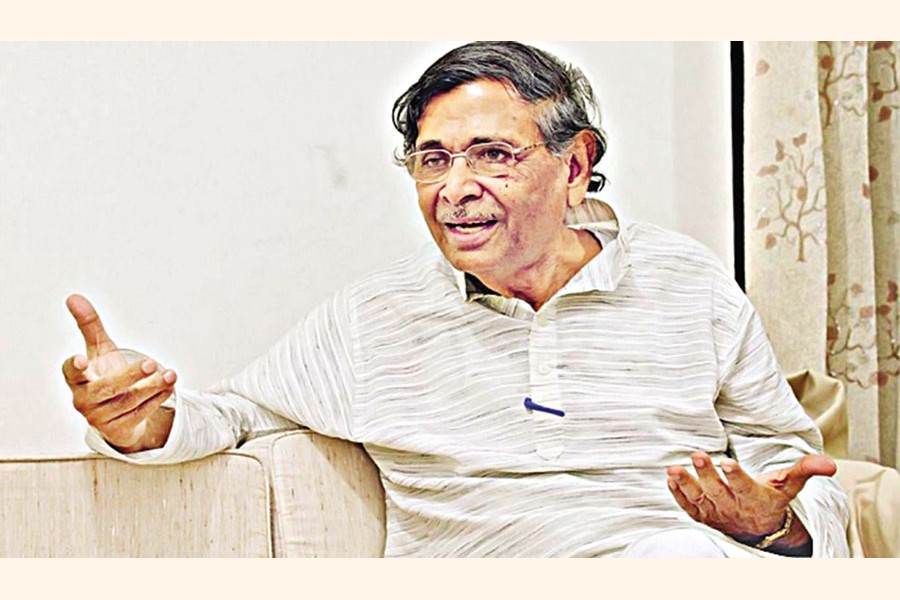 Eminent litterateur Anisul Haque had written in an article back in 1997, "He is a peddler of light, a magical man in the city of memories. As the dusk dawned and the earth got submerged in darkness, the man was still moving on with light in his hands, switching on the lights, from one pillar to another. Darkness descended from the sky, like curtains; but that man was still climbing upward with the help of a ladder, to the peak of pillars of light. It has been a symbol of strife against darkness, against fall - a symbol of human endeavour".

"There exist no other peddlers of light in this city of ours. But there is one Abdullah Abu Sayeed. He approaches the young and luminous hearts of Bangladesh with one million lights. There are no storms, no rains; his fate is like the fate-driven peddler of light - to ignite light in the hearts of people, to groom luminous folks; to seek illumined people. Abdullah Abu Sayeed says, 'Bangladesh is a new country. This is the time to build. There is need for builders - not one or two, but thousands. We seek illumined individuals, accomplished persons. We are striving from 500 places to groom those illumined folks".

Let us first have a glimpse of his life in a chronological order. Renowned educationist, prolific litterateur cum cultural activist, award-winning social reformer and the founder of 'Bishwa Sahitya Kendra' (World Literature Centre) Abdullah Abu Sayeed was born on 25 July 1939 at Park Circus of Kolkata. His ancestral home was at village Kamargati under Kochua upazila of Bagerhat district and his father Azeemuddin Ahmed was a college teacher, later becoming principal. He lost his mother during early childhood, but passed his matriculation examination from Pabna Zila School in 1955, and intermediate examination from P C College of Bagerhat in 1957. He then obtained B.A. (Honours.) and M.A. degrees in Bangla from the Dhaka University in 1960 and 1961 respectively. While at the university, he was a leading organizer of the observance of Birth Centenary of the Nobel Laureate Poet Rabindranath Tagore in 1961, despite threats from the then military junta of Pakistan.

He started his teaching career at Haraganga College of Munshiganj in 1961, followed by a brief stint at Sylhet Women's College. Then he joined government service in 1962 as a lecturer of Rajshahi College. After serving there for five months, he joined the Intermediate Technical College (now called Government Science College) of Dhaka as a lecturer and subsequently as Acting-Principal for two years. He also taught Bangla at the Dhaka Engineering College (now BUET) as a part-time teacher during that juncture. After that, he joined the Bangla department of Dhaka College at the invitation of the then principal Jalaluddin Ahmed during mid-1960s, which lasted till his taking voluntary retirement as a professor in 1992.

While dwelling on why his teacher deserves to be recognised as a foremost hero of our time, the litterateur Anisul Haque first cites Professor Sayeed's role as a teacher that spanned thirty years. He joined Rasjhahi College on 1 April 1962, and took retirement from Dhaka College on 1 April 1992. Coincidentally, both the days were 'April Fool's Day'. In fact, Professor Sayeed's most favourite advice to his students has all along been 'Be a fool', which was originally advised by his father during his childhood. He later explained why this quotation was his favourite while delivering a lecture on Ishwar Chandra Vidyasagar. He held that those people who are considered to be fools by ordinary folks of society actually strive to do good to others, and dedicate themselves for the welfare of the country and society without bothering about their own benefits. This kind of foolish people have in fact been instrumental in the progress of societies, and Ishwar Chandra Vidyasagar was one such 'fool'.

Professor Sayeed never took any roll-call of his pupils in his classroom. He considered it to be waste of time, and made the announcement about shunning this practice in his very first class. While writing about his unique teaching philosophy in his memoir, he wrote, "Why should I compel unwilling souls to sit in my class? My challenge was one step higher; not only to become a teacher, but to touch the hearts of all students, to immerse their hearts". Therefore, instead of focusing on the best students of his class, he used to try and make the dullest ones understand his lectures; because, if they could comprehend, then the whole class would understand.

Professor Sayeed persisted with his teaching job without looking for his own material gains including promotions in career, just like a fool. He did not discuss in his classes how or what techniques should be adopted to get more marks in examinations. But the fame of what he actually discussed still circulates through the mouths of his innumerable pupils even today. He was a legendary teacher of Dhaka city, and many students still recollect rushing to Dhaka College despite being students of other institutions just to attend and listen to Sayeed Sir's lectures.

Poet Abdul Mannan Syed had written a poem in his book of poetry 'Kobita Company Private Limited' that encapsulates the multi-dimensional talents of Professor Sayeed. He wrote:

Hunger for curiosity, numerous forays of dreams!/This time, I sit at a place after collecting myself./Real clarity! Genuine tranquillity! Concrete formula!/Kanthaswar! Te-le-vi-sion? -/Wri-tings? Show-man-ship? -/Those have been done much./But you know well, I am actually a dramatist, /Blood of plays flows through my veins./Yes, I want to confer on Abdullah Abu Sayeed/The title of the greatest playwright/Of an unwritten, impossible drama.

The many identities and versatile talents of Professor Sayeed have been depicted beautifully through this poem. It was he who brought out the periodical 'Kanthaswar' in 1965, which enabled him to play a leading anchor-role in the literary movement of 1960s. While engaged in teaching and literary pursuits in the then provincial capital Dhaka, he could feel the onset of a new literary era. Many talented youths were flocking to Dhaka at that time showing enormous promise. He therefore opted to work as a labourer in that effort in order to flourish those talents instead of focusing on his own writings and poetry. 'Kanthaswar' soon became the mouthpiece of the youths of that period, which was subsequently considered to be the most influential literary journal of Bangladesh.

EXCEPTIONAL POWER OF ORATORY: As pointed out by Anisul Haque, Professor Sayeed was born with an exceptional power of oratory, which has all along been reflected in both his formal and informal public appearances. His sense of humour and incisive wit, style of articulation and presentation, depth of knowledge, patriotism, and the power to recite poems extempore - all these combined to make him a legend among his students and admirers - almost similar to the Pied Piper of Hamelin. Listening to his speeches or participating in discussion sessions with him have all along been enthralling experiences that were always cherished by his pupils.

Abdullah Abu Sayeed started participating in TV programs from as early as 1966. He used to present children's and quiz programs at that time. But it was only from 1973 that he became serious about presenting programs of Bangladesh Television (BTV), which lasted until the mid-1980s. The large studio in the newly built BTV studio at Rampura aided this transformation. And he soon became the most popular anchor of BTV through a series of magazine programs that included 'Saptabarna', 'Choturanga', 'Anandamela' and lastly 'Panchbyanjan'. Saptabarna was telecast once a week for 90 minutes duration, and it soon became a national event across the country. Like millions of BTV viewers who became his fans overnight because of the entertainment and educational values of his programs, Professor Sayeed used to thoroughly enjoy his engagement in this branch of performing arts. Most of the magazine and quiz programs that we have seen on TV channels of Bangladesh since the 1990s owe a lot to Professor Sayeed's creativity on the small-screen. He had anchored 25 episodes of 'Amandamela', which later became a special program on the occasion of Eid festivities and the trend continues even today. He ultimately withdrew from TV appearances voluntarily while at the peak of popularity, as his involvement with Bishwa Sahitya Kendra increased manifold from the mid-1980s.

Numerous traits of Professor Sayeed's personality have found expression in his role as the founder and organiser of Bishwa Sahitya Kendra (World Literature Centre). He felt that innumerable educated and cultured people are needed for building Bangladesh as a prosperous nation in the backdrop of a degenerating society. He therefore established 'Bishwa Sahitya Kendra' in 1978 with the slogan "Alokita Manush Chai" (Seeking Illumined People). It strove to become a life-embracing centre of learning where people could grow and mature through the study of various branches of knowledge, the practice of ethics, and inculcation of values that make people humane and noble. The reading cycle (Path-chakra) included diverse sessions on world literature, cinema, documentary films, poetry, philosophy, open discussions, tourism, recitation, awareness of nature including trees, flowers, etc.

Initially, 25 university students sat under his supervision to read and discuss the world's greatest literary works during the late 1970s. Later, this reading program was expanded to include students of schools and colleges as well as the general people. At present, the institution has around 500 branches in about 55 districts all over the country, and thousands of volunteers are involved in this massive endeavour. Hundreds of thousands of young readers have benefitted from these branches. They also receive prizes by participating in book reading programs. The program 'Alor School' (School of Light) has targeted school and college students, and there is a plan to establish 200 such schools all over the country. Its aim is to groom liberal-minded, knowledgeable and ethical individuals.

Observing the inadequacy of libraries in Bangladesh, Bishwa Sahitya Kendra launched its 'Bhramyoman Library' (Mobile Library) program in 1998, which uses buses loaded with books to reach the young readers at different geographic locations. Today, this program has expanded to most of the districts of Bangladesh. The institution also has a thriving publication program, whereby Bangla translations of numerous world classics as well as outstanding literary and cultural works of the country have already been published. A massive work of encyclopaedic proportion on the origins and practices of various knowledge disciplines in the country is also in the pipeline now.

Professor Sayeed has won numerous awards in his long career at both national and international levels. These included: National Television Award, 1977; Ramon Magsaysay Award, 2004; Ekushey Padak (2005); and Bangla Academy Literary Prize (2012). His admirers and pupils feel that considering the enormity of his contribution in advancing the cause of education and culture in a developing country like Bangladesh, he undoubtedly deserves to be nominated for the Nobel Peace Prize. When asked by an interviewer last year whether he has received the awards he deserved, Professor Sayeed promptly replied, "I never sought any prize or fame. I only wanted to live with joy. I have sought joy in my own work throughout my life. I have received unforeseen and unimaginable love from the people all along. I have no sorrow or dissatisfaction whatsoever with the life that I have lived".

Nikli Haor: A journey to relief at your doorstep