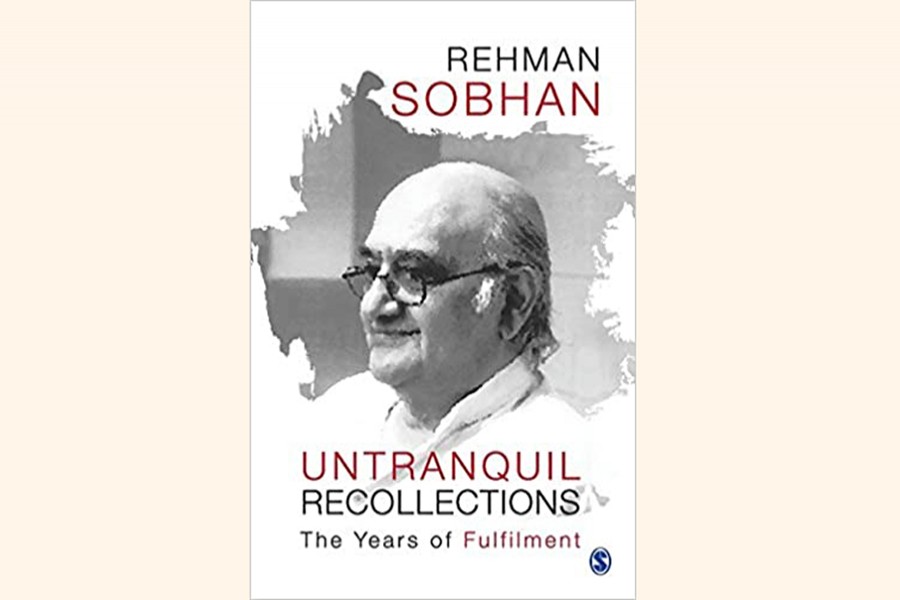 This review is on the autobiography of Rehman Sobhan titled Untranquil Recollections: The Years of Fulfilment (SAGE, 2016). The reviewer feels delighted to dedicate it to the 87th birthday of Rehman Sobhan that silently passed off few days back on March 12, 2022.

The 450-paged or so memoir of respected Rehman Sobhan comprises 17 fascinating   chapters presented in lucid, story-telling language. They are drawn on the mammoth memory storage that the writer intended to  evoke when he was 81 or so. The uphill-task so ushered tells us the stories of turbulent periods that he passed through to reach his momentous 'fulfilments'. In the memoir, 13 chapters seem to be devoted to the  narration  of 'untranquil episodes' of his long  career - from 'Families Inherited and Chosen'  to  'Engagement with the National Struggle' and  four chapters to his  fulfilments such as 'Witness to the Birth of a Nation', 'From Politician Economist to Political Combatant in the Liberation War', Envoy Extraordinaire' and 'The Liberation of Bangladesh'.

2. If the taste of a pudding is in its cooking, then the beauty of a book must be in its preface. The rewarding remarks at the beginning of the book by the author are likely to lure a reader to get into it burning midnight candle. The memoir 'seeks to track the improbable journey of a child born at an elite nursing home in Calcutta, with a British doctor in attendance, to a mother from the Dhaka Nawab Family and a father who was a member of the Imperial Police Service of India.

That seemingly shows that  Rehman Sobhan  was born with a  proverbial  silver spoon in his mouth   and  he reveals it  : 'I was raised in a world of privilege and educated in institutions such as St. Paul's School, Darjeeling; Aitchison College, Lahore; and Cambridge University which catered the elite and where English was the exclusive medium of instruction.'   He adds further,  'I first came to Dhaka in January 1957, at the age of 21. At that time, I could not speak Bangla as I had been raised in a family with little exposure to its rich culture. I could never relish ilish, had rarely heard any Rabindra Sangeet and could not take inspiration from the poetry of either Tagore or Nazrul Islam. When I landed in Dhaka after three years in Cambridge, I was, true to my upbringing and education, a brown sahib, fit for a career abroad, or in the Civil Service of Pakistan (CSP), or as an executive in the head office of a multinational company located in Karachi'.

3. But how could then he become a 'living legend' in the minds of the Bengalis - Bangladeshis we mean -- through his contributions to the causes of the Birth of Bangladesh? This a remarkable story, revealed in novelty, by Rehman Sobhan: 'The central theme of my story is intended to explain why, how and under what circumstances the great-great-grandson of  Nawab Ahsanullah, the son of a police officer who was once a contemporary of Field Marshall Ayub Khan at Sandhurst, would, on March 27, 1971, have his home in Dhaka invaded by an officer and his troops from the Pakistan army with orders to take him into custody on charges of high treason to the state of Pakistan'.

Each and every chapter of the book, as the feelings of the reviewer indicate, would keep the readers mesmerised   while reading the making of 'a Rehman Sobhan' over time and through thick and thin.  His father Khondoker Fazle Sobhan, came from Murshidabad (31st decedent of Hazrat Abu Bakr Siddiq - the first caliph of Islam ) and his  mother Hashmat Ara from Lucknow on her father's side and Dhaka on  her mother's side. In Dhaka, it was the Khwajas coming from Kashmir to do business in 18th century and making home here.  'I am the product of this confluence of families …very different in their origins, circumstances and engagement with the world around them'.   However in his own case, a chosen family grew out of long intimate relations with Salma  Rashida Akhter Banu  and after her passing in 2003, with Rounaq Jahan, both coming from enlightened environment,  and 'have exercised an even more significant role in influencing the course of my life' .

4. In a condition when he had no clear idea of what to make of his life, his father suggested that he goes to England for six to nine months to learn about leather business and then return to Dhaka. It would be a 'discovery' to the reader that he was one of the earliest of the Muslim Bengali participants in the private sector of East Pakistan owing entirely to his father - one of the first Bengali Muslim industrialists in the new East Pakistan. During first summer vacation in 1954 in Cambridge, he traveled to Bad Ischl in Austria apprenticing as a prospective cobbler in response to his father's hope of committing to leather business, and taught as an unpaid apprentice to learn how shoes were made (Chapters 5 and 8).

Cambridge University turned a new leaf in his life as eloquently espoused in 'Cambridge: The transformative Years'. Helped by cousins around like   Kamal Hossain and Kaiser Morshed and having fettle friends like Amartya Sen and Mahbub ul Haq, his more direct engagement with public and political life was derived from involvement in Cambridge Majlis. He had the privilege of meeting alumni like Pundit Nehru when he was a treasurer of the Majlis. Later on, as president, he hosted debates such as 'this house rejects SEATO', and interacted with Oxford Majlis led by Kamal Hossain. Rehman Sobhan's left-leaning political perspectives was shaped by Cambridge and it is where he met Salma - fleetingly though -- the lifelong partner afterwards (Chapter 6).

The emotional engagement with the then Dhaka, the capital of East Pakistan, has emerged in the memoir fascinatingly:  'as we approached Karachi, I experienced both tension and excitement at the prospect of constructing my future in a homeland that had never been my home. At the age of 21, I was not unduly worried by the unchartered terrain which lay ahead of me. At that stage I felt that life's possibilities are infinite  and that I was prepared to cross rivers and ascend mountains to realise my aspirations, however unfocussed they may have been'.

5. Before landing in Karachi, already Rehman Sobhan had a job offer in pocket as a Reader in Economics in Peshawar University with a handsome salary of Rs. 800 per month. He told his father that he was going back to Dhaka as he saw his home and future there rather than in West Pakistan and so he arrived in Dhaka on January 3,  in 1957 :  'Dhaka has remained my home ever since and will hopefully be the place where I will be laid to rest when my time comes.' En passant,  before reaching 22 years,  he spent only a month in Dhaka  in 1948 to visit his nana Khwaza Nazimuddin (Chapters 6 and 7).

Rehman Sobhan's  life under different shades including looking after tannery business, teaching, married life, political engagements  etc. are well articulated with his usual witticism (Chapters 7, 8 ,9 , 10 , 11).   Special mention may be made of his transition from 'Political Economy to Political Economist'. In a seminar in Curzon hall, he expounded the thesis of 'two economies' that went wild in concerned quarters.  The President of Pakistan himself went to expunge it and the  Pakistan Observer ran a front-page headline : 'Rehman Sobhan says Pakistan has two economies,  Ayub khan says Pakistan has only one economy'.  'This bizarre juxtaposition of the remarks of an all-powerful military ruler with those of a 26-year old university teacher reflected the changing climate of opinion in the Pakistan state that eventually culminated in an independent Bangladesh' (Chapter 12).

6. As mentioned before, few chapters provide an account of one of his fulfilments- 'From Political Economist to Political Combatant in the Liberation War' where he cites an interesting episode : 'some of the people there, mystified by my obangali appearances and outlandish garb, suggested I might be a Pakistani intelligence agent… some pushing and shoving took place where Anis, unfortunately, took a few punches, including one on the jaw … I remain indebted to Anis for tolerating these assaults on account of his obangali friend' ( Chapter 15).  And thus, Rehman Sobhan embarked on 'an uncertain odyssey for a liberated Bangladesh' - serving as an envoy for the provisional government and in other capacities.

However, Rehman Sobhan's encounters with the Father of the Nation Bangabandhu Sheikh Mujibur Rahman in various capacities came up in the book fleetingly but those situational descriptions themselves   could constitute a separate chapter.

8. The last para of the memoir remains worth pondering over. A friend of his named Tutul hosted a party on New Year 's Eve, the first in the fiery nine months, in a reunion - 'most had lived through these nine months not knowing who would be alive to greet the new year. Tears and laughter enhanced the flavor of our libations as we embraced each other in a spirit of hope and unity where none could anticipate the cruel and divisive days that lay ahead'.

Economists, political leaders, Civil Society members and even students should read this fascinating  book written by a person who, according to late Professor Akhlaqur Rahman, is a more Bangalee  than Bangalees  and who, like Pandit Nehru, came from the top but beheld the down.