2020: Trump and threats to global stability 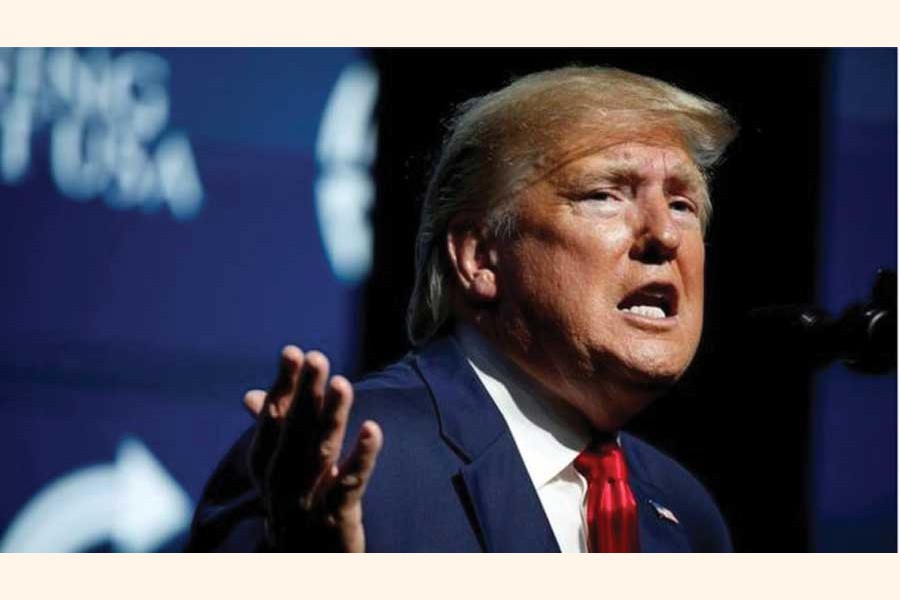 The year 2020 will be particularly important not only because it will see the next US Presidential election in November, but also because it will be the start of another decade where several existing complex problems are casting a shadow on the international horizon.

We have already seen the crisis resulting for President Trump due to impeachment efforts undertaken in the US House of Representatives and now in the US Senate. However, in addition to tackling this impeachment battle, Trump will also have to contain several issues that are directly and indirectly affecting the international arena.

NORTH KOREA: It may be recalled that in their one and only meeting in the Oval Office in November 2016, former President Barack Obama warned Trump that the utterly unpredictable North Korean leader Kim Jong Un and his burgeoning nuclear arsenal was his single most dangerous and intractable problem. Going into Trump's final year of his first term, it still is.

Trump's first gambit was simply to bluster and bait the Korean despot. "Fire and fury," and anger as a weapon were used by Trump as Kim tested increasingly lethal and long-range weapons. Then, receiving nothing in return, Trump pivoted and delivered to the leader of a floundering nation desperate for international attention - a global platform, a smile and a handshake.

Now, Trump, waiting for a so-called Christmas and New Year's gift from Kim has received the answer. Kim Jong-un has informed Trump that he is ending the suspension of nuclear and long-range missile tests put in place during talks with the US. Reports have indicated that he has also left a door open for dialogue and that the scope of any testing would depend on the US's "attitude".

Trump appears to be making light of the evolving dynamics but others are worried that fresh developments do not create or touch off a new round of escalating tensions.

In this context one also needs to touch on the other aspect - Trump trying to extract from the South Korean government an increase by nearly 400 per cent of  the cost for the American forces that have been stationed in that country. This has been some sort of a stumbling block but US-South Korea bilateral inter-active engagement has put a check on Kim's worst impulses.

CHINA: Trump and Chinese leader Xi Jinping have not still signed a trade pact covering all dimensions. However, they are actually trying to delay implementing any new tariffs, trim some existing duties on Chinese products and open markets in China to some American farm products. Even though that will likely happen in the early weeks of 2020, as Trump himself suggested, there may still remain several factors that might delay the signing of a broad agreement before the November 2020 US elections. It also needs to be noted that though the first round may help ease some pressure on American farmers, retailers and consumers, it does not look likely that it will return either country to the level of trade before Trump launched the trade war. Indeed, the first hesitant steps pertaining to the proposed trade pact is likely to leave in place duties and tariffs applicable to nearly US$ 390 billion in consumer items. Meanwhile, China has continued its efforts towards rapprochement with a host of other partners, including Japan and countries that have joined its Belt and Road Initiative (BRI) development initiative.

It may also be mentioned that China, anticipating further delay in resolving trade problems with the United States has already started its push for the internationalisation of the Chinese currency, the Renminbi (RMB). This is being done as China believes that such a measure would lead to more economic influence on the world stage, a bigger say in the process of reforming the international monetary system, and better integration of the Chinese economy with the rest of the world. Chinese economists also think that such a step would enable China and others within the Eurozone to jointly contain the all-pervasive dominance of the US currency.

REARRANGEMENT IN THE ALIGNMENT OF RUSSIA AND CHINA: The Trump Administration, according to strategic analysts, have been carefully following the changes, including the formation of new alliances and partnerships that has emerged gradually over the last two years, particularly in Africa. Developments in that continent are slowly pushing the United States to the sidelines. Both China and Russia and their leaderships have been crisscrossing Africa selling trade and arms respectively to a continent Trump has never visited. This joint approach on the part of these two countries in Africa has signalled growth in their historic rapprochement through the opening of greater cooperation in their respective gas pipeline networks linking their two countries. China and Russia have also found an ally in Iran. These three countries, in the recent past have launched a series of joint military manoeuvres in the northern Indian Ocean.

This change in the global security matrix is being seen against the backdrop of the US and Israel trying to isolate Iran because of the nuclear treaty from where the United States has walked away. The situation might deteriorate because of the effects of US sanctions on Iran. This could also be the year when Iran finally decides it has nothing further to lose and moves toward a nuclear weapon. It has already breached the levels of enriched uranium it is allowed under the Nuclear agreement from which the United States has withdrawn. The question that will then arise is: what will the USA and the EU do then?

RUSSIA, SYRIA, IRAQ, IRAN AND TURKEY: Under the guidance of Russian President Vladimir Putin (entering his 20th year of Russian leadership as President or Prime Minister), this country has got involved over the past few years in several regions - Europe, the Middle East, Africa and also Latin America. Its role in key Mideast countries - Syria, Iraq, Iran and Turkey - has however continued to draw special attention. Putin's close bilateral and strategic engagement with Turkish President Erdogan and Syrian President Bashar al-Assad  within this paradigm has created a matrix where Russia has emerged as the most important ball-player in that region. Putin has also enabled Russia to obtain a firm toehold in the eastern Mediterranean, where the American Sixth fleet based in Naples has long held sway.

Putin, thanks to developments in Ukraine and the aforementioned countries will be an important factor in Trump's efforts to regain a higher profile in the international arena. This will definitely be followed carefully by the US electorate before and during the US Presidential election year.

Meanwhile, Turkey has become the first NATO (North Atlantic Treaty Organisation) Member State to agree to adopt a major Russian weapons system -- the S-400 anti-aircraft missile. This has urged strategic analysts to discern the growing influence of Russia within the Central Asian landscape as Russian and Syrian forces enter the final phase of ending the civil war.

Nevertheless, the path forward during the election year appears to have persuaded Trump to take more forceful action. On December 29, the US carried out airstrikes against five targets in Iraq and Syria associated allegedly with an Iran-backed militia - Kataib Hezbollah who have been accused by the Pentagon for a number of recent attacks on American forces in Iraq near Kirkuk that killed a US civilian contractor. This military action led to the death of 27 persons of Iraqi origin. It also underlined that there is now an emerging Trump doctrine that the US will not hesitate to take firm military action if its national interests are affected.

However, there was a direct response to the US air attack. In a coordinated manner, Iraqi protesters crossed strategic boundaries and attacked the US Embassy in Baghdad- the biggest US diplomatic Mission in the world. Trump responded to this situation by alleging that Iran was behind this and vowed to take necessary action.

The situation was further exacerbated with the aerial attack on the motorcade of Major General Soleimaini, Head of the Iranian Revolutionary Guards termed as the Al Quds forces, who had arrived in Baghdad on  January 02, 2020. This led to the death of Major General Soleimani, some of his companions who had arrived with him and also the Iraqi Militia Commander Mahdi Al Muhandis (who had come to the Airport to receive Soleimani).

Trump and the US Administration have expressed satisfaction with this act. However, the rest of the world, including the UN Secretary General, Russian President Putin, China and the Iraqi President and Prime Minister have expressed their great concern with this latest development. The Iranian leadership has, as expected, condemned this US attack and vowed to take revenge.

This has made the scenario more volatile and created instability.

BREXIT AND NATO: With Britain finally leaving the European Union (EU), sooner rather than later, Trump will need to initiate critical trade talks, first with a newly non-EU Britain and then with the rest of the European Union. The denotations and connotations will involve security measures as well as resolving disagreements with two longtime allies - France and Germany. With both these countries, the recent past has witnessed escalating tensions resulting out of Trump's approach towards transactional diplomacy. This has mostly been reflected in the measures being taken by the US Administration with regard to US tariffs being imposed on French wine, cheese and handbags, and tariffs being imposed on auto imports from Germany. These latest steps have raised questions about the historical friendship that has existed between the US and these two countries for the last seven decades. There is also Trump's approach regarding contributions to be made by NATO Member States towards NATO funding. This has generated controversy and unease. Consequently all Member States of the EU and NATO will now follow closely the emerging scenario.

INDIA AND PAKISTAN: There is a growing debate within South Asia over communalism and radicalism. Analysts have drawn attention to the evolving situation over Kashmir and the introduction of the National Register of Citizens (NRC) and the amendment of Citizenship (Amendment) Act (CAA) by the Narendra Modi government. Many have drawn attention to these measures having been contrary to the existing principles of the Indian Constitution and human rights. That will require Trump's attention ahead of his election.

AFGHANISTAN: The effort to find a solution to the Afghan quagmire continues. The Taliban have apparently been holding discussion with several parties associated with the Afghan leadership. However, despite promises and efforts, instability continues to gain momentum in that country. The US effort to withdraw troops from there is still unresolved.

We have an interesting scenario before us. President Trump has a tough task ahead leading up to the November 2020 presidential election in US. One can only hope that as it unfolds, it does not unravel international peace and stability.

Muhammad Zamir, a former Ambassador, is an analyst specialized in foreign affairs, right to information and good governance, can be reached at muhammadzamir0@gmail.com

Unlocking the full potential of our life

Whatever happened to wealth generation?

Women entrepreneurs: What do they need?