Remembering Bangabandhu in the month of August 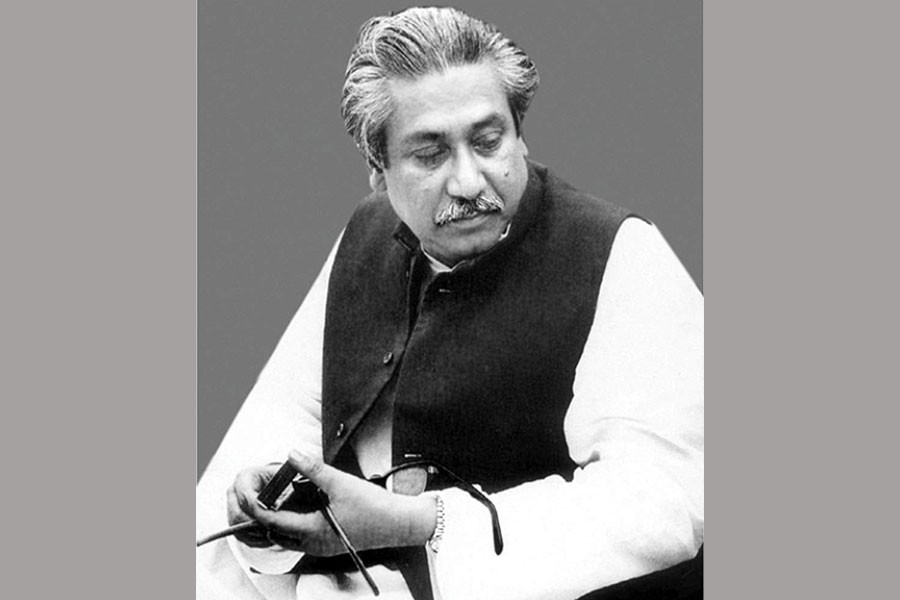 Bangabandhu Sheikh Mujibur Rahman was assassinated along with his family members on the dark night of 15 August 1975. A pall of gloom overpowers the Bangali nation as the month of August arrives each year. The dark shadows of grief are seen and felt all around. This is nothing new. During each August since the tragic death of Bangabandhu, the people of Bangladesh become very sad and despondent.

Bangabandhu Sheikh Mujibur Rahman was one of those immortal personalities who led a whole nation to freedom by inspiring the population with nationalism and by providing rock-hard and astute leadership for breaking the shackles of age-old colonial subjugation. He has been rightly dubbed as the greatest Bangali in the thousand-year-old history of the Bangali nation. In terms of courage, valour and heroism, he was without parallel.

The circumstances under which Mujib entered the political arena need some elaboration. It was the 1940s. There was the odour of bombs and ammunition all around the globe. Tanks were rolling on the land and fighter aircraft hovering in the sky. The whole of Europe was engulfed in the flames of an all-out war. And then suddenly in Asia, Japan entered the fray siding with the Nazi Germany. In British-held India, places like Calcutta, Chittagong and Feni became targets of the Japanese bombers. And very soon Chittagong and Feni were bombed.

In the face of these Japanese onslaughts, the British government closed down all food warehouses. Boats carrying paddy and rice were seized. As a result, a severe famine struck the province of Bengal. According to official estimates, 3 million people perished in the aftermath.

Sheikh Mujib entered the political arena as a leader of the student community in this grim scenario. By then, he had witnessed the 'Quit India' movement of Mahatma Gandhi, the radical programmes of the Congress, and the formation of the 'Azad Hind Fouz' by Netaji Subhash. It was destiny which brought Sheikh Mujib into the political arena of Calcutta in such volatile circumstances. He received patronisation of Huseyn Shaheed Suhrawardy and Abul Hashem of the Muslim League, who were clearly his political mentors.

Until then, the Muslim League was a favourite hunting ground for the Nawabs, the Knights and the Khan Bahadurs. A new life was infused within the party when Abul Hashem became its General Secretary. He incorporated various economic programmes in its agenda. Frustrated Muslim youths then started to flock behind the Muslim League in greater numbers.

Sheikh Mujib realised that the Muslim League could not be invigorated as a political institution through religious orchestrations alone. By holding meetings and rallies in the rural areas, he started to publicise his party's manifesto, which included economic programmes. Abul Hashem observed those rare qualities in Mujib which were mostly seen among the Communist Party workers. He worked for the Party almost round the clock. Intimate associations with Abul Hashem and Suhrawardy helped Mujib inculcate those rare leadership qualities which ultimately made him the undisputed leader of the Bangali nation.

Early in the 1940s, most of the Congress leaders were put behind bars. In a way, the whole of Congress as an institution was imprisoned. Consequently, it was easy for the Muslim League to play on a barren field. Their publicity campaign in favour of a separate Pakistan was thus very easy. Around this time, Mujib became the leader of Calcutta City Chhatra League.

In order to elicit cooperation from the Congress, the British government sent the 'Cripps' Mission' in 1942 with a formula for granting dominion status to India. Top Congress leaders were released to create conducive climate for discussions. The discussions started in New Delhi in a cordial atmosphere, but the Congress rejected the mission's proposal on the ground that it contained the seeds of Pakistan. Even Mahatma Gandhi described it as a 'post-dated cheque'. After this came the Cabinet mission in 1946 and lastly the Wavell scheme. This last scheme envisaged the division of India into three regional blocs under a loose Federation. The ultimate liberation of Bangladesh under the leadership of Bangabandhu through an independence struggle was in the final analysis a reflection of this last scheme.

After India had been partitioned, a students' rally was held in Calcutta on the lawn of Sirajuddowla Muslim Hall. It was held in the backdrop of farcical elections for the leadership of East Bengal assembly. Addressing this huge rally, the General Secretary of Calcutta City Chhatra League Sheikh Mujib declared that he was in favour of a newer struggle for freedom. He said, "Independence cannot have a final shape. As one famous Political Scientist had said, 'the state has no finality, nor can it have any perfected form'. What we call democracy is a beginning and not an end."

Bangabandhu had to cross numerous hurdles and many paths in his quest for the emancipation of his fellow Bangalis after the partition of India in 1947. The language movement of 1948-52, the country-wide movement for constitutional principles of Pakistan, provision for combined elections in place of separate ones, the 6- point movement of 1966, inhuman tortures behind bars, the Agartala Conspiracy case, and the historic 7 March speech of 1971 in front of a million-strong audience - all these were various evolutionary phases of Bangabandhu's charismatic leadership. Most significant was his declaration of independence on the night of 25 March 1971, after the Pakistani forces had launched a genocidal attack against unarmed Bangalis. The ultimate outcome of all these was an independent and sovereign People's Republic of Bangladesh.

Great men like Bangabandhu arrive in this world at different junctures of history only to finish the incomplete tasks of their forefathers. They come in different ages when their presence is most acutely felt. As Bangabandhu's contemporary Fidel Castro had said after meeting him, "I have not seen the Himalayas, and I do not have the desire to see it now, because I have seen Mujib".

I have come to speak about

The greatest Bangali of all ages,

Whose heart had tremendous love for humans;

I have come to speak about a courageous sailor

Who was a roaring wave in the surging sea;

Overcoming the burning heat of summer,

And piercing the fog of winter,

He had moored the boat on the bank.

And the poet Ananda Shankar Ray had written:

"As long as the Padma, Meghna, Gouri, Jamuna flow on,

Your accomplishment shall live on, Sheikh Mujibur Rahman."

The Bangalis have firm faith that history has no death, and Bangabandhu Sheikh Mujib - the symbolic offspring of history - is immortal. He is forever luminous on the canvas of eternity in this land of Bangla.