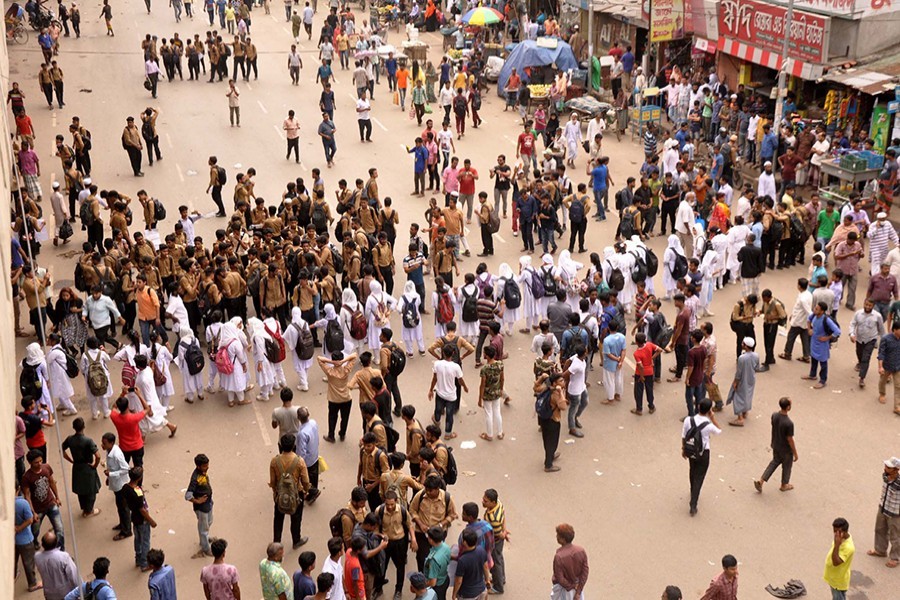 The future may be brighter, who knows! That's still hard to believe at least until a way out from the crisis at hand is visible. A Bangladesh youth can't tell his/her friends that s/he is going to build a new family shortly. Where are the opportunities to grab or platforms to compete for proving potential of the millennials, for pursuing their dreams? What about the middle class worries of survival -- today and tomorrow?

Skirmishes over hundreds of issues on the social media produce no credible solutions for millions of boys and girls, so far as it concerns education or jobs. Thus, self-belief in individuals, which may come from social aspirations, functioning of institutions and collective confidence, dwindles.

In 1971, despite the war, Bangladesh had promised an entire generation 'equality, human dignity and social justice'. Also defying all odds, the 1990 students' upsurge heralded a new journey of democracy and welfare society.

The current pandemic has exposed not just weaknesses of the health system. Relief materials can't smoothly reach the ones who need them desperately. The majority of students can't join online classes or engage in learning new skills. Jobless, the Bangladeshi expatriates struggle, staying abroad or after returning to villages all over the country.

Living in crises, we could have sought fresh breathing creating a new atmosphere. However, the average people are not only reluctant to dream but they have run out of dreams. Some of them hope to see that the social ills would die down automatically. When powerful contemporary ideas turn old, new ideas are required to bring solutions to the latest problems of society. Conspicuously, the protagonists of the status quo fear the unknown and thus try to resist change.

That kind of lack of confidence in future instigates corrupt practices at different spheres of life, as reflected in brain drain or flight of capital.

That becomes the order of the day, to a great extent. We can't postulate yet that proper analysis of failure of the present is a step towards making solutions for a better future.

The rhetorical statement by US President John F Kennedy that "Ask not what your country can do for you - ask what you can do for your country" is not relevant in the 21st century context. The customised slogan "Long Live Revolution" no longer attracts the youth of new generations. The dominant world goes by what Omar Khayyam said of Nagad - "Ah, take the Cash."

The European metaphor of social contract, as manifested in efforts to build state institutions in countries around the globe, was often hijacked by hegemonic forces. Once someone is powerful in the statecraft, institutions do follow him/her, effectively excluding the masses from the process of building lives.

Unfortunately, the message that the best Bangladesh can offer its generations of people are yet to come is not disseminated with a strong assurance. Nobody realises if time has come to revive the dreams of Bangladesh that remain unrealised. Why can't youths emerge as entrepreneurs, leaders in several sectors?

The barrier to healthy social development lies not just in the system - the growth of individual is hindered further by a perfectly functional peaceful anarchy unleashed by the social media and its success in keeping consumers glued to it.

Irrelevance of citizens in a society they live in - physically or virtually - is both cause and effect of sterilisation of social thinking and activism. Some people need to think exceptionally to make it a new normal for the foreseeable future.

Even if they don't want, the youth and children are the future of any country. It's truer for Bangladesh, for they have to build their own life and collective future. It's up to the youthful minds to generate ideas of how they would flourish their potential, assume leadership and contribute to building a future. The juvenile's movement for safe road in 2018 was just a prelude to what Bangladesh is expected of in the near future.