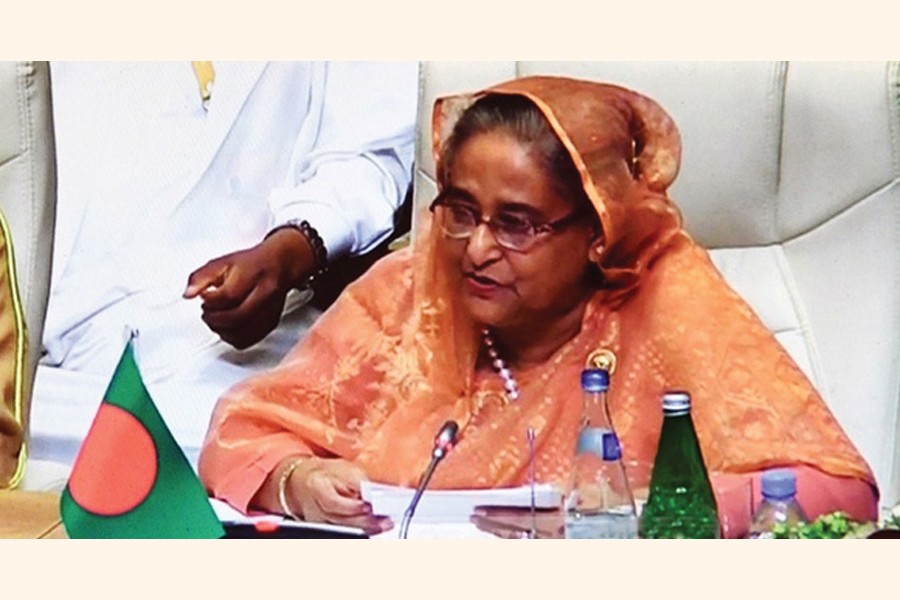 Prime Minister Sheikh Hasina addressing the plenary session of the  18th NAM Summit in the Azerbaijan capital Baku on October 25, 2019: She sought global support in resolving the protracted Rohingya refugee crisis and for combating the adverse impacts of climate change.         —Photo: bdnews24.com

The 18th Summit of the Heads of State and Government of the Non-Aligned Movement (NAM) was held from October 25 to 26 in Baku, Azerbaijan, with the theme, "Upholding the Bandung Principles to Ensure Concerted and Adequate Response to the Challenges of Contemporary World". A Preparatory Ministerial Meeting (October 23-24) preceded the Summit.

Bangladesh joined NAM in 1973 with Bangabandhu Sheikh Mujibur Rahman representing the country in the Algiers Summit. Two factors influenced his historic decision: (a) to widen Bangladesh's relationship with other developing countries of Asia, Africa and Latin America; and (b) to obtain recognition for the newly-liberated nation. Bangladesh's foreign policy engagement based on the principle of 'friendship to all and malice to none,' which correspondents to the central principle of NAM.

Based on the precepts of non-involvement in the military power blocs of the United States and the former Soviet Union, NAM was formally created by 25 nations, including India, Egypt, Indonesia, Ghana and former Yugoslavia, at the Belgrade Summit in September 1961. Currently, NAM comprises 120 member-states covering 55 per cent of world's population, 17 observer states and 10 international organisations.

Organised triennially, NAM is the second-largest grouping of states after the 193-member United Nations. However, it operates without a permanent Secretariat -- a weakness that deters the organisation from being coordinated more competently.

Membership in NAM is based on five essential criteria, i.e. (a) pursuit of an independent, non-aligned foreign policy; (b) non-adherence to any multilateral military alliances; (c) support for national liberation movements; (d) keeping away from bilateral military agreements; and (f) disapproval of foreign military bases  within the territory of the state.

Even though not formally aligned with or being against the two dominant world powers of the time, most of the resource-starved and underdeveloped NAM member-states remained linked with one or the other side for military or economic assistance. Hence the name of the organisation remained a misnomer. Perhaps, that prompted the former Sri Lankan President and NAM chairman, J.R. Jayewardene to satirically comment, "There are only two genuinely Non-Aligned countries: The United States and the Soviet Union."

However, throughout its history, NAM has played a vigorous role in the process of decolonisation and attainment of independence of former colonial countries, preserving international peace and security, and in articulating the hopes and aspirations of the member-states. Nevertheless, many NAM countries that fought to establish democracy, equality and the rule of law continue to experience democratic backsliding and authoritarian resurgence.

The NAM leaders at the Baku Summit called for strengthening multilateralism, underscored unity in combating terrorism, and expressed deep concern about the adverse impacts of climate change. The Summit adopted the 'Baku Declaration', which resolved to increase the effectiveness of NAM by making it a dynamic and effective mechanism to represent, coordinate and support the interests and priorities of its member-states.

The text also called for further strengthening the United Nations "to turn it into a more democratic, effective, transparent and representative structure, in accordance with current geopolitical realities."

Indeed, NAM is still relevant in the face of long-standing as well as new challenges in a globalised world. Despite the end of colonialism, the hegemony of the peripheral or neo-colonial forces along with conflicts and confrontations continue. People still need to be freed from poverty, hunger, disease, malnutrition, inequality, and maladministration. But differences in political outlook, competing interests, coordination problems and lack of concerted efforts continue to hinder the effectiveness of NAM. In order to be effective and capable of adequately addressing emerging threats and challenges, NAM should be redesigned, reformed, and revitalised.

Dr Kamal Uddin Ahmed is a former Professor and Chairman, Department of