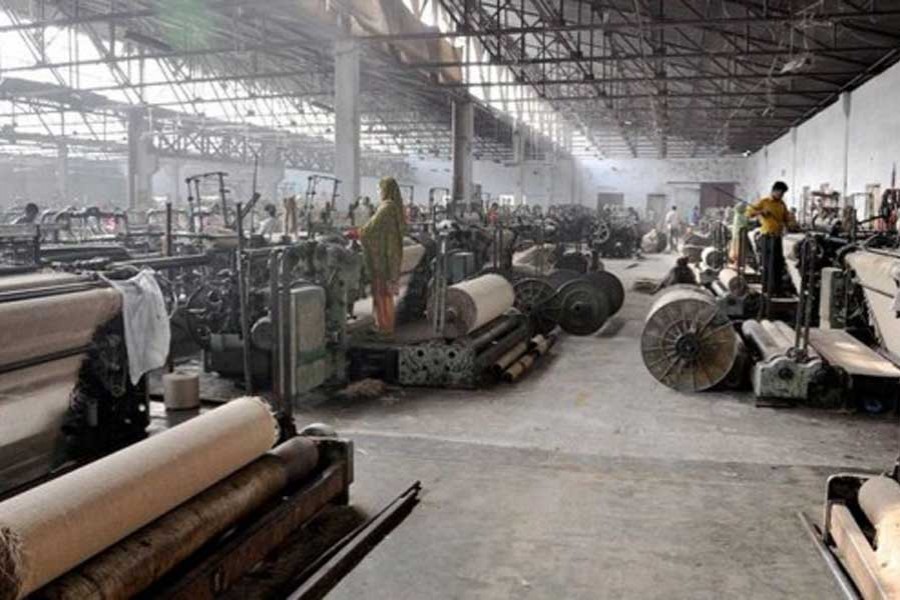 According to recent media reports, the total losses in mills and factories owned by the country's five state-owned corporations have risen by six-fold over the past 10 years. While these factories incurred a total loss of Tk 3.25 billion in 2008-09, the combined losses rose to Tk 18.51 billion in 2017-18 fiscal year. These five corporations are: Bangladesh Chemical Industries Corporation (BCIC), Bangladesh Sugar and Food Industries Corporation (BSFIC), Bangladesh Steel and Engineering Corporation (BSEC), Bangladesh Jute Mills Corporation (BJMC) and Bangladesh Textile Mills Corporation (BTMC). The private sector was lagging far behind when these mills in the paper, cement, sugar, jute and textile sectors started production. But now their rivals in the private sector have forged ahead so much that these government-owned entities are finding themselves incapable of surviving in a fiercely competitive business environment.

Despite the government adhering to a long-running policy of private sector growth and privatisation, the state-owned enterprises (SOEs) of Bangladesh still play an important role in the economy by adding value, generating employment and collecting revenue. The existing enterprises are making crucial contributions, especially in the power and gas, transportation, communication and service sectors. According to official figures, the total operating revenue of non-financial SOEs during 2011-12 financial year was Tk 1069.93 billion, which increased to Tk 1498.93 billion in 2016-17. Total value addition during 2014-15 was Tk 130.46 billion, which rose to Tk 232.55 billion during 2016-17. Overall net profit of all these enterprises stood at Tk 92.95 billion till  April 30 2018.  However, improvements in overall figures during the past few years may be attributed mostly to the windfall profits made by Bangladesh Petroleum Corporation due to a massive fall in global oil prices and lack of a concomitant price adjustment within the country.

The existing non-financial SOEs in Bangladesh can be categorised under seven sectors comprising a total of 45 enterprises in line with Bangladesh Standard Industrial Classification (BSIC). The seven broad sectors are: manufacturing; power, gas and water; transport and communication; commerce; agriculture; construction; and services. It has been found from various studies over the years that allocation of responsibility and authority in these public enterprises has remained quite inconsistent with the managerial needs of delegation and decentralisation. While field officers remain responsible for implementation, much of the authority and power remains with the central bosses at the secretariat and corporations. The required authority is usually not vested even where responsibility is assigned.

The upward concentration of power and authority up to the ministry level often depletes the drive and dynamism at the field level where it is most needed. In fact, the effectiveness of public enterprises has been greatly impaired through curtailment of their autonomy and postings of bureaucrats having little managerial or professional acumen in top positions. Back in 1989, a USAID/GOB study on public administration efficiency showed fundamental weaknesses in the bureaucratic control of public enterprises, centralised authority in decision making, lack of confidence in delegation of power, lack of professional knowledge in the ministries and anomalous positions in different cadre services.

The institutional arrangement for the control and supervision of SOEs reflect a multi-tier structure. There are three hierarchical levels in their bureaucratic control system. At the bottom lie the individual units, which are the ultimate object of control. These units have virtually no operational autonomy and all decisions regarding production, staffing, procurements etc. must be referred to and approved by the higher authorities. The statutory corporations are above the individual enterprises, and control, direct and supervise those directly under them. The corporations themselves do not enjoy much operational autonomy. On matters of policy (such as pricing) and operations, they have to consult with the ministries above them. The uppermost bureaucratic tier is the controlling ministry/division, which exercise control over various aspects of policies or operations.

The bureaucratic control of SOEs in Bangladesh has not only been extensive in coverage, but also intensive in nature. A survey of the chairmen and directors of industrial corporations was conducted in the mid-1970s and early 1980s to evaluate the intensity of control by the bureaucracy. It was found that the controls became more rigid in five areas (day-to-day operation, organisational matters, personnel management, marketing and pricing of products). It has been observed even during recent times that the intensity of control by the ministries/divisions in day-to-day operations have gradually risen over time.

The extensiveness and intensity of control leaves very little room for applying intelligence, innovation and risk-taking. Innovative traits and entrepreneurial spirit are therefore replaced by a rigid bureaucratic attitude in the administration of public enterprises. Although control creates an impact on accountability, the enterprises and corporations shift the incidence of accountability back to the central ministries as the extent of control and direction emanate from them.

The control system for SOEs in Bangladesh should therefore be viewed as a growth in time, instead of as a continuation of logic. Historically, there have been powerful civil service elites, who wielded considerable power and influence in framing and implementing national policies and in running the government. They have consistently been reluctant to part with their authority, zealously guarding their privileges. They have viewed autonomy and decentralisation of power as a threat to their interest and have always blocked such moves. Thus, because of their opposition, the rules of business for public corporations and enterprises could never be framed. Besides, instead of becoming a means for timely managerial decisions, monitoring has been made a tool for post-facto audit.

It is therefore quite evident that the bureaucratic control structure of SOEs in Bangladesh is not performance-oriented. The detailed means and measures for evaluating and monitoring performance have not yet been worked out properly. A control system built around mistrust and geared towards finding procedural omissions and commissions cannot improve operational efficiency and performance. Consequently, an overhaul and rectification of the current management systems and practices in the SOEs of Bangladesh seems to be the only solution for overcoming their current stagnation and losses.