Ratcheting up trade war will not solve America's woes 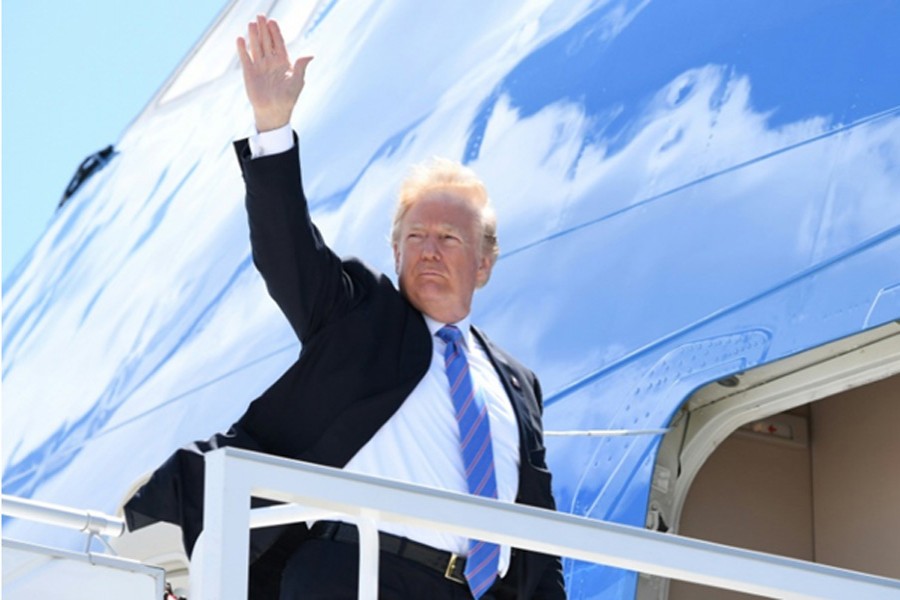 The US-China trade war has flared up in less than two weeks of President Trump's announcement to delay a set of new tariffs worth US$160 billion on Chinese imports until December, purportedly to avoid harming the holiday shopping season.

On August 23 China announced retaliatory measures to hit $US75 billion of US goods with new tariffs, increase duties by 5-10 per cent on more than 5000 American-made products including food, aircraft and oil - and to re-impose a 25 per cent duty on US car imports.

This announcement came on the eve of the G7 Summit in a strategic move to embarrass President Trump. The US-China trade war is now morphing into a currency war, and is widely regarded as the biggest risk to the global economy.

President Trump angrily announced his own new tariffs: raising existing tariff on US$250 billion of goods from 25 per cent to 30 per cent, and announcing that US$300 billion of other goods and products that were to be taxed from September 01 at 10 per cent would now be hit with a 15 per cent tariff.

Trump also ordered US companies to "start looking for an alternative to China, including bringing your companies HOME and making your products in the USA".

China's Commerce Ministry responded on August 05 by halting purchases of US agricultural products. At the same time, the People's Bank of China (PBC) allowed China's currency to fall to its lowest level in more than a decade, past the key seven per dollar level, sending US equity markets sharply lower.

President Trump in a tweet said, "It's called 'currency manipulation.'" Lending support to Trumps accusation, the US Treasury alleged that for the first time since 1994 China was manipulating its currency.

Trump followed up by saying on August 09 that he was not ready to make a deal with Beijing, and suggested that he might cancel the next round of trade talks scheduled for Washington in September. Rolling back his promise during his meeting with China's President Xi, Trump reaffirmed that the US would continue to refrain from doing business with Chinese telecoms giant Huawei.

CURRENCY MANIPULATIONS: President Trump and the US Treasury labelled China a currency manipulator despite China's actions failing to satisfy the US Treasury's own definition of a currency manipulator. The US Treasury Department uses three criteria; two coincide with internationally agreed criteria under the Articles of Agreement of the IMF: persistent one-sided intervention by the country to push down the value of its currency, and a large current-account surplus. Neither of these applies to China currently.

Even though in the past China did keep its currency substantially undervalued to boost its competitiveness, during the last five years, the PBC intervened to slow down the depreciation of its currency. For example, from the middle of 2014 to late 2016, it spent about US$1.0 trillion (one-quarter) of its foreign-exchange reserves to bolster the exchange rate. It was by far the largest intervention in history to support the value of a currency.

But now that the Chinese economy is slowing and its US exports are falling due to US trade restrictions, and with an almost balanced current account, its currency is expected to weaken. The only difference between now and then is that now the PBC is not supporting the currency and allowing it to fall. In other words, the PBC is just accepting the market forces, largely a result of Mr Trump's trade war.

WEAPONISING CURRENCY: China is not alone. President Trump regularly accuses others, especially Europe and Japan and whichever country the US has trade deficits with, of pushing down the value of their currencies to unfairly compete with the US.

In July, Mr. Trump tweeted, "China and Europe playing big currency manipulation game … in order to compete with USA. We should MATCH …"

Soon after on July 18, returning from a G7 Finance Ministers' meeting, Treasury Secretary Robert Munchin said in an interview that the US might intervene in currency markets.

A VICIOUS CIRCLE: A beggar thy neighbour currency war is a dangerous game. It will destabilise an already fragile global economy, struggling to recover robustly even more than a decade after the global financial crisis (GFC). Instead of solving America's perennial trade deficits, it will push the US into a vicious circle of low growth and higher unemployment.

Trade war can only shift bilateral trade deficits on others; it cannot eliminate overall trade deficit, which is the result of spending more than what is produced. America's insatiable appetite for debt-financed consumption is the main driver of its trade deficit, exacerbated by rising budget deficits caused by ideology-driven tax cuts for the rich.

Among other factors, the weaker Euro or Japanese Yen and other major currencies in recent months are the result of weaker economies. But besides currency manipulations by others, President Trump blames the Federal Reserve (Fed), implying its Chair Jerome Powel a "bigger enemy", for a stronger dollar and is pressing to lower the interest rate.

The Fed is caving in, mainly in response to the growing weakness of the US economy caused by the trade war. The Federal Reserve Chair, Jerome Powell, said recently at the annual monetary policy conference in Jackson Hole, "Trade policy uncertainty seems to be playing a role in … weak manufacturing and capital spending in the United States," and monetary policy should be calibrated accordingly.

The more Mr. Trump rattles the financial market and creates uncertainty for the global economy, the stronger the US dollar will be regardless of the Fed's action as investors move to a safe haven. This is the predicament the US has to suffer as long as the US dollar remains the world's major reserve currency.

Paradoxically, therefore, Trump's trade and currency war induced volatility will send the dollar up rather than down, making the US less competitive.

Meanwhile, there will be collateral damage. Trump's attack on the Fed and the dragging of the Treasury Department into his unfounded currency manipulation accusation will undermine both institutions, and hence weaken their authority to handle widely expected trade war-induced economic slowdown.