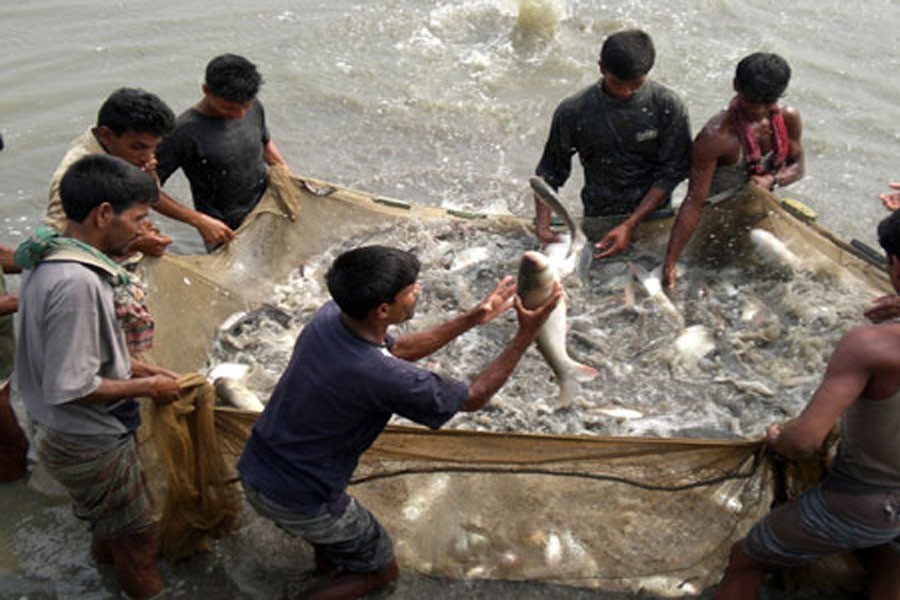 That the indigenous varieties of fish are increasingly becoming short in supply is indisputable. Common people experience this on a daily basis when they try to fish from open sources or they visit a fish market. Yet not many people are aware of the wide varieties of local fish still available. Haors, baors, beels -all marshy lands -- lakes, canals and rivers once profusely dotted the country. Today their numbers and sizes have both declined. Still 265 varieties of sweat-water fish are available - albeit on a reduced scale --from these open sources. What is of particular concern is that 91 species of the total 265 are facing a threat of extinction. Quite a few of them fall in the category of the highly endangered.

The World Fish, the Bangladesh Fish Research Institute and the Directorate of Fisheries, Bangladesh have sounded the alarm bell ringing that a number of local species of fish are fast approaching the critical stage of extinction. About 1.3 million fishermen are directly involved with small scale fishing from open sources and their annual total catch is estimated at1.6 lakh tonnes. Of the total, the majority of the species are indigenous. It is these fishermen who have the first-hand experience of the unavailability of certain kinds of fish.

The country does not in general feel the shortage of indigenous fish because of the expansion of pisciculture responsible mostly for breeding imported varieties. Of late, though, some of the local varieties on the verge of extinction have been successfully cultured. Quite a number of such cultured species are now widely available. The artificial breeding of fish has been so extensive that the country now ranks globally third in fish production and shows the prospect of becoming soon second only to India.

Clearly the luxury of relishing the dishes of local fish from open sources is increasingly becoming a rarity. But should the nation reconcile with the idea of dispensing with the indigenous varieties of fish from open sources? Even a cursory look at the reasons behind the decline in indigenous fish should give one the hope that not all may be lost as yet. If a comprehensive plan is devised and, as experts suggest, the strategy followed to raise the production of Hilsha is replicated for protection and breeding of local fish, their production may go up many times.

As is known, the ban slapped on Hilsha fishing for about two months during its spawning season and declaration of areas of rivers and estuaries as no-fishing zone or Hilsha reserve have paid rich dividends. The same can be effective in raising the production of local sweat-water small fish. This may then be complemented by a few other pragmatic steps. Some of the rivers like the Buriganga are heavily polluted and micro-organism cannot survive in such waters, let alone fish.

So the number one step concerns rescuing the rivers from such pollution. This is a prerequisite not only for improving the quality of waters in connection with survival of fish alone but also for people and other animals. Polluted waters pose a grave threat to environment and it lasts long, its impact may prove decisive for annihilation of the people living on its banks. The next important factor is the shrinkage of rivers and accumulation of polythene and plastic along with sedimentation.

Clearly, much of the problem is man-made and it is mostly avoidable. Dredging of rivers is a way out but the type of half-way-house dredging now followed cannot take care of the problem. There is need for extensive capital dredging with advanced dredgers not procured here as yet. There is no alternative to banning polythene and limiting the use of plastic. Or if plastic utensils or goods cannot be dispensed with, the throw-away culture should be stopped once for all. Their reuse value has to be ensured through proper collection of the discarded plastic and its recycling in an environmentally friendly way.

Lastly, fertiliser and pesticide use has to be brought down to the minimum and introduction of organic farming and pest control on a wide scale will free the country from the curse of massive environmental pollution. Polythene and plastic hamper spawning of fish and shallower waters in rivers and canals restrict their movement. In the past crop fields got inundated where a whole variety of indigenous fish in groups or individually went for migration.

Those days may not return again but at least the natural water bodies can be allowed to retain their water qualities or usual streams unhampered so that fish can still take to migration in the monsoon. In high summer, fish was scarce in the past; it will be scarcer now. But at least people may take consolation from the fact that cultured fish will be available. It is better to have a supplement -no matter if it is artificially raised -than to have none or very little.

It will be better to respect the link between the environmental protection and the protection of indigenous fish. The cost of projects on these two together will prove much less than if they are undertaken separately.