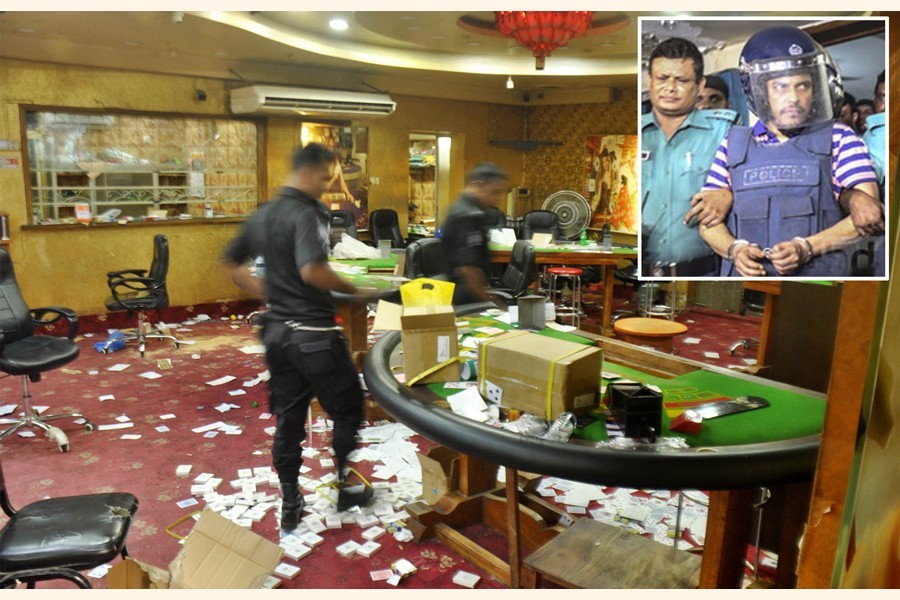 The ongoing raids on sporting clubs illegally operating casinos, dens of extortionists and tender manipulators are likely to produce a mixed feeling of surprise and nausea among most people. Surprise, because those who are getting caught red-handed were powerful players of sister organisations of the ruling party only the day before. Nausea, because such criminal elements could move up the leadership ladder of such important organisations!

One such so-called Jubo League leader is a sinister character with Freedom Party and Chhatra Dal (rival party's student organisation) background. What is even more outrageous is his terror connection. He is reported to have sent a share of his ill-gotten money to an underground terror group's ringleader now living abroad. He has learnt the notorious art of extortion from his close association with a number of leaders of the underground criminal gangs. This is clear from the busting of his torture cell by the law enforcement agencies. He used electronic devices to inflict extreme physical pain to captive traders for ransom.

The rise of such criminal or even dubious characters up any political organisation's hierarchy is a cause for serious concern. It is unbelievable that there is dearth of dedicated and honest party workers in the ruling party's sister organisations. It appears their merit is not always rightly evaluated. Successive raids and unearthing of caches of illegal weapons, cash money and liquor in possession of more such leaders who have focused on accumulation of unearned income only confirm this perception.

It is not a healthy development for any economy or society. The prime minister has issued a stern warning against criminal activities political elements resort to. In fact, it began with purging the Chhatra League of its dubious top leaders. Then the prime minister and one of the most influential ministers Obaidul Quader have declared that no one involved in criminal practices -irrespective of his/her position -would be spared.

If the dawn shows the day, it is quite a laudable beginning. It is a rare development in the country's political history that the ruling party has started a campaign to flush out its bad elements. Actually cancerous growth of opportunism and criminalisation within the ranks has always contributed to the downfall of political parties not only in this country but almost everywhere in the Third World. The ruling party deserves kudos for taking the fight to its own camp where the evil cadres pose to grow to a Frankenstein proportion.

Actually, this campaign should have been started long ago. Better late than never. Now that the campaign is on, suspects within the party and sister organisations have got the message. Much will depend on how this is completed. If the wings of the party deviants are clipped -as it is being done from Jahangirnagar University to Tongi, from Dhaka to Kushtia, there is hope that real politics will return to genuine politicians.

For the public though, it will come as a great relief that the ruling party is handing those who have betrayed the party and the people over to the laws. This is in fact the first step towards establishing the rule of law in society. If everyone knows that no political loyalty will be enough to save one when one commits crimes, society will be better equipped to restore sanity to all spheres of life. Opportunities will be equal and open to merit only. This is how nations set their benchmarks ever higher to elevate their status in the comity of nations.