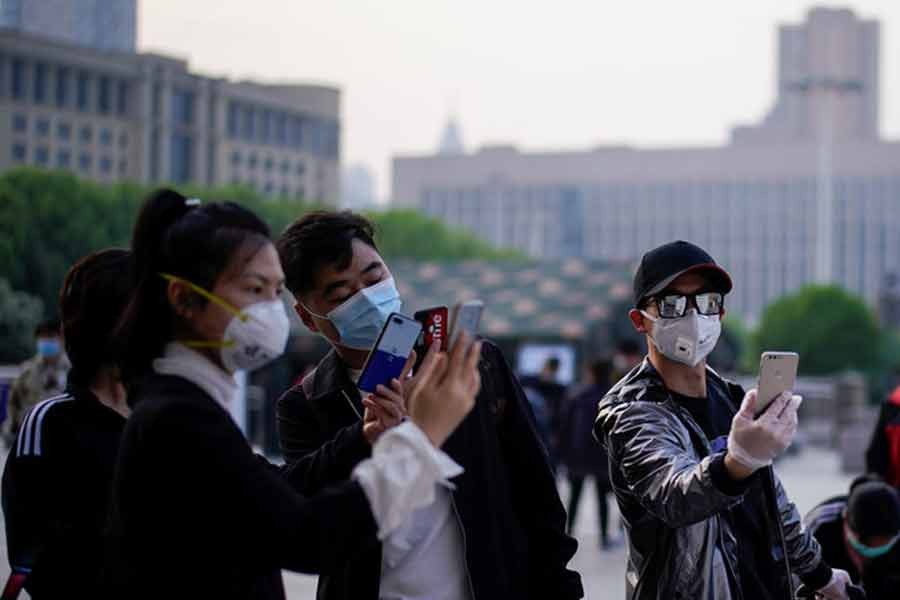 People scanning a health QR code at Wuhan's Hankou Railway Station as travel restrictions for leaving the city, the epicentre of a global coronavirus disease (COVID-19) outbreak, are lifted and people will be allowed to leave the city via road, rail and air, in Wuhan, Hubei, China on April 8. –Reuters Photo

In the midst of the Covid-19 pandemic, we are recognising how important it is to maintain social isolation. We are fearful of touching any physical object - starting from cash, elevator buttons to doorknobs. We are also fearful of getting into taxies, due to the presence of a human driver. We are no longer visiting cafes and restaurants, as neither human-made food nor waiters serving food is perceived to be safe.

Not only Covid-19 has been changing its generic code, but also there are numerous other viruses like this  around us. With 40 trillion vireos, our body is also a rich host of viruses. We live in a world of viruses. Our natural immune system has been our defence to cope with the offensive attack of such microorganisms, while we keep leveraging their useful roles to support our lives. But unfortunately, we have been weakening our immune system, making us increasingly vulnerable to such attacks.

What is the remedy? Well, in addition to searching for a vaccine, living in a touch-free world of isolation, and being digitally connected with our surroundings appear to be our survival strategy.

Over the decades, we have been enjoying a boom of cellular communication. The intense competition of private investment has covered basically every pocket of human settlement with not one, but several microwave energy-radiating wireless networks. Upon succeeding in connecting virtually every human being with the power of successive generation cellular technologies, here is now 5G to connect billions of physical devices to make society human touch-free. 5G is the most powerful wireless communication technology ever built. It operates in millimetre waves -- mid as well as the higher band of which is reserved for military usage in some countries, particularly in the USA. The main value proposition of 5G is not to offer higher-speed internet connection to individuals' smartphones or laptops. Rather to connect physical objects like autonomous cars, factory robots, water valves of city water supply, or switches of power grids is the target of 5G connectivity-powered innovations. According to cellular industry association GSMA, economic contributions of 5G in mmWave Bands will primarily be in remote object manipulation, industrial automation, next-generation transport connectivity, and meetings in augmented and virtual reality (AR/VR) environment, which will be making 23, 18, 14 and 16 per cent contribution respectively to generate $2.2 trillion in global gross domestic product (GDP), and $588 billion in tax revenue by 2034.

It seems that 5G is a blessing for humanity to engineer new forms of social and economic activities in the post-Covid-19 era, which will be dominated by human touch-free production and consumption in social isolation. In this world, students would be interacting with their peers, some of them would likely be artificial characters, and faculty members in a synthetic environment, powered by 5G-connected AR and VR gears. Instead of bringing groceries and washing them again and again with all kinds of disinfectants, people will be ordering robot-cooked foods to be delivered by autonomous vehicles and delivery robots. Instead of taking care of kids and the elderly with touch and feel, we will interact remotely over the 5G network through robotic caregivers. Instead of meeting friends and socialising with them, we will instead remain busy with all sorts of contents delivered by a super-fast 5G network to our diverse gadgets. Instead of going to factories, workers wearing AR/VR gears will interact remotely over the extremely low latency 5G networks with robots in factories anywhere in the world.  Full human-sized robotic dolls having human-like skin, speech, essential organs, and sensory capability may start redefining the very definition of human living.

To build our human touch-free world, we need low latency, high-capacity network connectivity. As opposed to more than 100 ms latency of previous-generation technologies, 5G's promised 10ms latency appears to be a welcome message for seamless remote interactions between humans and machines. And 5G's capacity to connect up to a million devices per square kilometre, in comparison to 4G's capability of connecting 100,000 devices per square kilometre, meets the last requirement of building our dream world. Does it mean that by blending the power of vaccines with 5G-powered social isolations, we will succeed in getting rid of the menace caused by pathogenic microorganisms?

It's well recognised that at this stage when we do not have a vaccine, our sole means of countering Covid-19 has been our natural immune system. This immune system has been vital not only to counter this virus but all sorts of pathogens that are attacking us all the time. As experts opine, our city-centric lifestyle has been continuously eroding this vital capability to survive on this planet. Instead of cooking fresh foods and vegetables, it has become fashionable for us to dine at restaurants. Our menu is getting rich with processed food, as opposed to garden-produced fresh fruits and veggies. Instead of going out to play with friends in the sun, consequentially enriching our body with vitamin D, we are increasingly finding ourselves busy with smartphones in the dark corner of the room. Instead of having good night's sleep, we often remain busy with social networks. As we are getting involved with odd working hours in the gig economy, powered by the network, we do not wake up early in the morning or go to parks in the afternoon. Wherever we have been blessed in this new cellular network and the smartphone-centric world, they have become vital recipes to weaken our immune system.

The issue of the effect of radiation caused by wireless communication is still a non-conclusive agenda. Despite having unresolved debates, public health concern is growing, and it has reached a peak in the 5G era. On the one hand, 5G is asking for a spectrum from higher frequency bands, which have a higher capacity to penetrate human skin, and on the other, the connectivity of millions of new devices over very high speed, extremely low latency network is going to likely increase the radiation intensity level.

Neither reliance on vaccine, nor human touch-free production and consumption in the era of 5G will possibly offer us a remedy. Rather the situation may keep getting worse. Instead of focusing on designing human touch-free, 5G-powered autonomous world for fighting menaces like Covid-19, it's time to change the course for getting closer to Nature for making our immune system stronger.

M. Rokonuzzaman, PhD is an academic and researcher on technology, innovation and policy.